Review: THE INVITATION Leads To A Foreboding Night 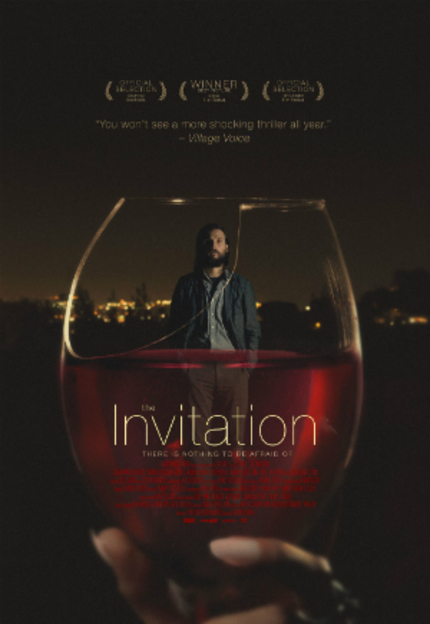 Before dinner, there is foreboding.

Will (Logan Marshall-Green) and Kira (Emayatzy Corinealdi) are traveling on a winding, hilly road in Los Angeles, on their way to a dinner party, and distracted, when something happens that is quite upsetting for both of them. Nonetheless, they soon arrive at the home of David (Michiel Huisman) and Eden (Tammy Blanchard), and greet the other guests.

It's a reunion dinner. David and Eden have been away for two years, and it seems that all the guests are longtime friends who have fallen out of contact with each other. There's Tommy (Mike Doyle) and Miguel (Jordi Vilasuso), a gay couple; Gina (Michelle Krusiec), an Asian woman whose mate Choi (Karl Yune) has been delayed; Ben (Jay Larson), a single fellow; and Claire (Marieh Delfino), a single lady.

Initially, the conversation is strained and extremely awkward; it feels as though everyone has become estranged from each other over the past two years, at least. Those notes are enhanced by the appearance of Sadie (Lindsay Burdge), who got to know David and Eden during their time away and is now a house guest, and then underlined and emphasized by the appearance of Pruitt (John Carroll Lynch), a rather stiff new friend of David and Eden. As if that wasn't enough foreboding, it turns out that Will and Eden were formerly a couple and lived in the house, and that something happened that permanently strained their relationship and affected each of them profoundly, prompting Will to stalk around the rooms with a faraway look in his eyes.

The Invitation yearns to be a different type of drama. Screenwriters Phil Hay and Matt Manfredi are Hollywood veterans whose credits include the variously woeful Ride Along, R.I.P.D., and Clash of the Titans. But years ago, they also crafted the script for John Stockwell's shimmering romantic drama Crazy/Beautiful, and their work here hearkens back to the type of story that doesn't need special effects or outlandish comedy to be effective and moving. They have different goals in mind here, but without much context for the characters supplied -- how they met, what they have in common, what they're doing now -- it's an uphill battle to become involved in their seemingly endless talking, talking, talking, even after the stakes are raised.

Karyn Kusama is a marvelous director. She debuted with the nuanced and gritty Girlfight (2000), worked with Hay and Manfredi on 2005's imaginative Aeon Flux, and helmed the nuanced and horrific Jennifer's Body (2009). Her touch is evident, as individual scenes are well-framed and staged. Also, the performances are entirely in tone with what appears to have been intended. Furthermore, the sound design adds menace to an atmosphere that could easily have become quite eerie and unsettling.

Without venturing into spoiler territory, after things are set up, there came a point when I wanted something to happen. I didn't want anything specific -- but something to galvanize the action. Instead the movie keeps circling back upon itself, going over the same issues and refusing to engage with the elephant in the room. (Except for Will, who wobbles between sounding like a voice of reason and crying out like a mad prophet in the wilderness.) Eventually, things amp up to a resolution that was pretty much the type of conclusion I was anticipating, but by that point the ship had sailed for me.

The ideas that are developed are ripe for exploration, and The Invitation aims to deepen the conversation. The sincerity and craft on display notwithstanding, the movie achieves a limited, unsettling level, and then stops right there.

Review originally published during SXSW in March 2015. The Invitation opens in select theaters in the U.S. on Friday, March 25, via Drafthouse Films.

The Invitation from Drafthouse Films on Vimeo.

Do you feel this content is inappropriate or infringes upon your rights? Click here to report it, or see our DMCA policy.
Drafthouse FilmsEmayatzy CorinealdiKuryn KusamaLogan Marshall-GreenTammy Blanchard