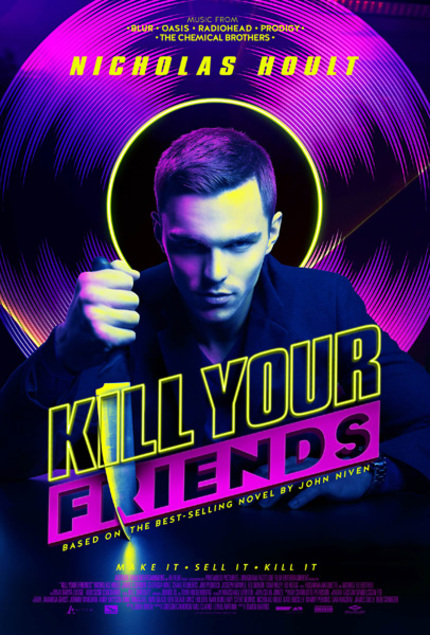 It's contest time again, and this one is quite impressive.

We've partnered up with our friends at Well Go USA to present a chance to celebrate the theatrical release of Owen Harris's Kill Your Friends, starring Nicholas Hoult (Mad Max: Fury Road), on April 1 -- that's today! The film takes a look at the late '90s British music industry through the eyes of the savagely ambitious Steven Stelfox (Hoult).

Apart from the comparisons to American Psycho, which are definitely appealing, the film also features an amazing soundtrack of BritPop and dance hits from bands like Blur, Oasis, Radiohead, Prodigy, and The Chemical Brothers. Kill Your Friends is based on the critically acclaimed book of the same name by John Niven, who also wrote the screenplay for the film.

London, 1997; the British music industry is on a winning streak. Britpop bands Blur, Oasis, Radiohead rule the airwaves and Cool Britannia is in full swing. 27-year-old hit chasing A&R man Steven Stelfox is slashing and burning his way through the music business, a world where careers are made and broken by chance and the fickle tastes of the general public. In an industry of dream-makers, Stelfox refuses to buy into the ‘dream’ – and despises anyone that does. Fueled by greed, ambition and inhuman quantities of drugs, Stelfox searches for his next hit record amid a relentless orgy of self-gratification. Created by an industry that demands success at any price, Stelfox takes the concept of ‘killer tunes’ to a murderous new level in a desperate attempt to salvage his career. Balanced against the backdrop of the music business and its characters, Stelfox is the ultimate anti-hero: chronically sexist, racist, and everything else-ist.

The trailer, linked below, suggests a film that is stylish, satirical, and a lot of fun; just the way we like them. Now for the goodies.

Well Go USA has provided a pair of great prize packs for ScreenAnarchy readers, first up, the grand prize (one winner):

But that's not all! Well Go have also given us a runner-up prize package (five winners) that's almost as cool!

All you need to do is send an email to josh [at] ScreenAnarchy [dot] net with the subject line "Kill Your Friends Contest", and your name and US mailing address in the body. We'll pick our six winners at random next Wednesday and Well Go USA will have your prizes out to you shortly thereafter.

Good luck! In the meantime, check out the trailer for Kill Your Friends, now on VOD and in cinemas.

Do you feel this content is inappropriate or infringes upon your rights? Click here to report it, or see our DMCA policy.
contestkill your friendswell go