SXSW 2016 Review: TEENAGE COCKTAIL, A Potent Mix Of Love, Lust, And Something More 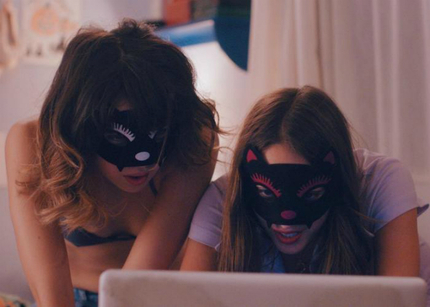 Ah, young love! Unexplored emotions come tumbling together, and every thought feels awkward. The gestures are fumbling, tentative, and clumsy: Where do I put my hand? Is it OK if I do ... that?

Far more than a straightforward teen romance, however, Teenage Cocktail has greater aims in mind, and consistently pushes back against stereotypes. Young protagonists Annie (Nichole Bloom) and Jules (Fabienna Therese) slowly and believably fall in love, which in itself is a wonderful accomplishment. They sound and look and act like teenagers, not always sure of themselves, but positive that they want to make their own decisions and deal with the consequences as they see fit.

Annie has recently moved to the area, against her will, with her parents (Michelle Borth and Joshua Leonard) and younger brother. She is a bit shy and withdrawn, and has trouble fitting in at school. She has an instant attraction to Jules, who is bright and confident and outgoing, and the two begin spending time together. Jules has the stronger personality, but she's not domineering toward Annie; she's always thoughtful and considerate of her feelings.

In the company of Jules, Annie becomes more comfortable with herself, feeling free to express herself physically and emotionally, and acting on her instincts, perhaps for the first time in her young life. Their altogether lyrical romance fuels the movie, which glides along in pleasing rhythms with their deepening relationship.

As the romance unfolds, however, more sinister notes begin to pop up. A seemingly unrelated, unhappy man (Pat Healy) is shown together with his unhappy wife and son. Clearly, they are not experiencing a tranquil domestic life, and the suspicion grows that they will somehow intersect with the happiness that Annie and Jules are cultivating.

For her part, Jules' home life is summarized as an unhappy experience as well. That stands in stark contrast to Annie, who may not be happy in her home but at least has two caring parents and a comfortable house to live in. Just about all teenagers rebel against their surroundings, no matter what they are, and Annie's tendency to be withdrawn and keep her feelings to herself doesn't make it any easier for her parents to know how to reach her. The performances, especially by Bloom and Therese, are nicely nuanced and feel authentic; the script by John Carchietta, Sage Banick, and Chris Sivetson, drawn from Amelia Yokel's story, features dialogue that sounds entirely natural.

As Teenage Cocktail moves further into its story, additional elements are revealed that add to the low-level tension about the intentions of the parallel Pat Healy family situation. It's expertly shot and edited, but this is the 21st century, after all, and we're all sadly aware that teenage girls can often meet unhappy endings, especially when unhappy older men are anywhere nearby.

Eventually, circumstances coalesce and the tension rises, and by that point, I was completely invested in the characters and found myself actively rooting for them. Teenage Cocktail is a potent combination of love and lust and something else, maybe just the common desire for a better life, and it left me vibrating with anxiety.

The film enjoyed its world premiere at SXSW yesterday. It screens again later today and twice more during the festival.