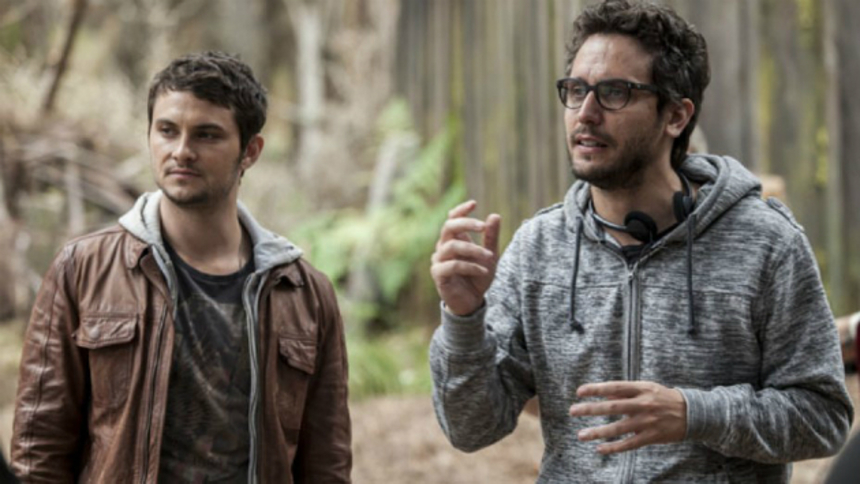 Directed by Fede Alvarez (2013's Evil Dead, pictured above), the setup is brisk. Three Detroit teenagers (Jane Levy, Dylan Minette, Daniel Zovatto) have made an art out of breaking into the homes of rich people, vandalizing and looting as they go. They're in and out quick, thanks to knowledge they've secretly gained about each house and the people who live there.

Levy and Zovatto are planning to move to California as soon as possible. Levy lives in a trailer park and has good reason to get out. Minette, besotted with Levy but locked in the friend zone, is the key to their success with home invasions. Zovatto is big and tough, he thinks, a white gangster type with primal instincts.

They learn of a new target with, they deduce, sufficient cash on hand to fund their California getaway. Minette is reluctant but soon acquiesces -- this is an action movie, after all -- and the gang of three case out the joint. Working in their favor, they believe, is that their target is a blind man (Stephen Lang) who lives in a conveniently abandoned neighborhood. The blind man is a Vietnam veteran, and anyone who's seen Rutger Hauer in Blind Fury knows that the kids have severely underestimated their intended victim. Nonetheless, they proceed with their plan.

Though it's easy enough to guess the broad outlines of what will take place, director Alvarez goes from zero to 60 at a furious pace, steering away from the plot holes and contrivances that almost inevitably arise. Alvarez cowrote the original screenplay with Rodo Sayagues, and the dialogue is as efficient as most of the action sequences. The writers draw from several genre favorites, borrowing plot devices and twisting them to their own advantage.

That being said, the writers come up with a couple of their own outrageous ideas that are true howlers, threatening to throw the entire movie into the realm of the ridiculous. Alvarez's direction makes an effort to lasso those tendencies, which is not entirely successful.

With only four principal characters, locked mostly in a house, Don't Breathe depends mightily on the performances to succeed, and the steely presence of Stephen Lang goes a long way toward making it all somewhat believable. He is the proverbial force to be reckoned with, a pure, sustained burst of terrifying energy who is somehow both the victim and the villain.

Jane Levy roots the "heroic" side of the equation with far much than simple pluck. Her motivation may feel forced, as if the writers realized, 'Oh, she should have a good reason for smashing the law and trying to steal this guy's loot,' yet Levy expertly rides the tumultuous tides of her character. Dylan Minette, who was a winning good guy in Goosebumps, takes a somewhat similar character for a walk on the wild side. He is a prototypical cautious child; he's always saying, in effect, 'don't go in the basement,' and with good reason. Still, he's winning, sympathetic character. Daniel Zovatto is stuck in a more narrow personality, gaining little empathy except for those smitten by good-looking, stupid and brutal bad boys.

Don't Breathe speeds through tight turns with wild abandon and crashes off cliffs on more than one occasion, yet somehow lands on its feet. It's good fun.

The film enjoyed its world premiere at SXSW this past Friday night. It screens once more during the festival and then will open in wide release later this year.

Do you feel this content is inappropriate or infringes upon your rights? Click here to report it, or see our DMCA policy.
Don't BreatheDylan MinetteFede AlvarezJane LevyStephen LangSXSW 2016