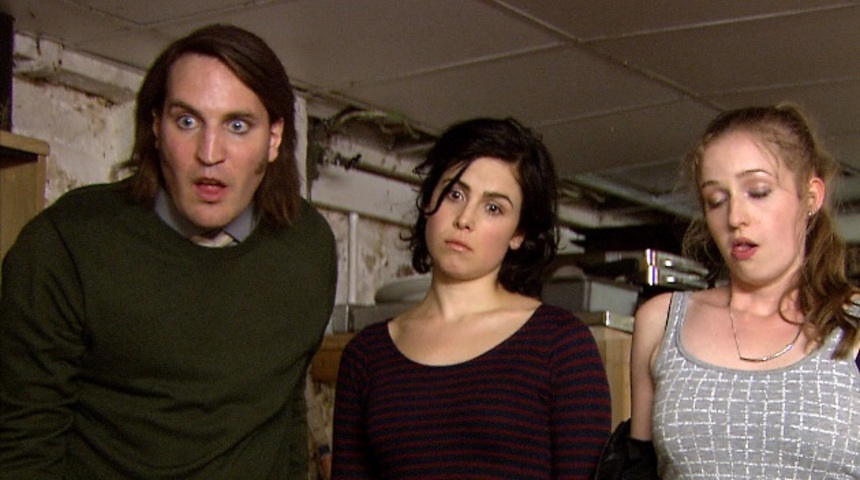 (Or: welcome to the planet of the apes, where the apes are us.)

Ben Wheatley's film High Rise is currently making waves and shocking people in its theatrical run, with its bleak story of societies happily degenerating into animal behavior. But earlier last year, Mr. Wheatley helped produce another film which pretty much hit on the same points: Steve Oram's irritatingly-named Aaaaaaaah!. Both films played at the International Film Festival Rotterdam, and seeing them in short succession makes it easy to see what attracted Ben Wheatley to Steve Oram's project.

In Aaaaaaaah!, we are shown the outskirts of London and the people in it. Rather strange people, mind: they behave like apes. Though they are clothed and use everyday utilities and television, they grunt and sniff at each other, they mark their territories by pissing and defecating, and they simply fight with each other to get whatever they want, the strongest ones having the right of it. They are thoroughly uncivilized and straightforwardly primal with their wants and needs.

And, disconcertingly, it doesn't make a big change from what we normally see in regular society. Bullying, abuse, pecking orders, dick-flaunting, seduction, arrogance, deflation, ostracism... it's all here, but instead of lengthy verbal explanations and excuses you just get ooo-ooo-ooohs and aaa-aaa-aaahs and a punch or two.

It's this similarity with daily life which is the film's obvious focus and the source of most of its satire, and at moments the film has flashes of brilliance. But in other scenes, the grunts just seem to be another language and the whole commentary about the use of civilization gets very muddled.

Director Steve Oram is an award-winning scriptwriter, having co-written Ben Wheatley's Sightseers (in which he also had a supporting role as an actor), so it should come as no surprise that his film succeeds at being a caustically wry affair indeed. Peppered throughout Aaaaaaaah! you spot familiar faces from great British comedy series like, for example, The Mighty Boosh and Green Wing, and all actors throw themselves into ape-like behavior with wild abandon.

But still I got the feeling that Aaaaaaaah! never quite clicks as a whole, and that much of the obvious talent here is wasted. Sure, there is no shortage of What-The-Fuck moments, and you even get the occasional shock. But its central idea is pretty obvious after the first few minutes, and you might wonder if this film would have worked better as a short than as a full feature.

All in all this is a weird slice of cinema indeed. Not totally unlike an 80-minute Monty Python sketch, it obviously has merit, but I'm still not sure what to make of it. Audiences in Rotterdam also gave it a mixed reception, granting Aaaaaaaah! a rating of 3.1 out of 5.

The film is currently travelling the festival circuit, but as its original UK release is already some time behind us there is good news for the curious: it can also already be bought on Blu-ray. Those curious might best prepare for some major head-scratching though. Or even better: watch it with friends and scratch each others heads...