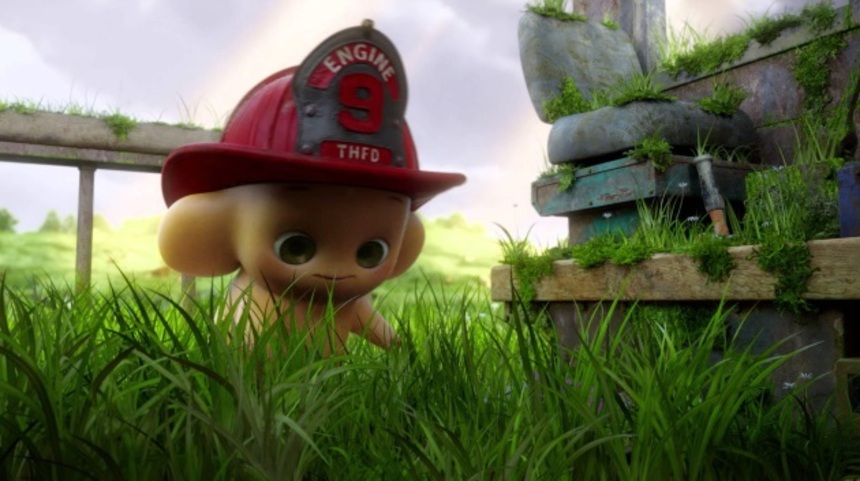 Today Tonko House's latest creation, called Moom, is having its world premiere at Cinequest Film Festival. In 2014, after leaving the safety of the Pixar nest to start their own studio Tonko House, directors Daisuke "Dice" Tsutsumi and Robert Kondo already brought us the wonderful The Dam Keeper. It was a welcome surprise and--next to making my list of 2014 favorites--deservingly earned an Academy Award nomination. This time the duo brings us a fantastical tale of a memory who helps releasing lost memories from their objects.

Unlike The Dam Keeper, which was an original written by Kondo & Tsutsumi themselves, Moom is an adaption of an illustrated children's book by Genki Kawamura and Yuki Mashiko. That same Kawamura-san also happens to be one of Moom's producers (together with Tomohiko Ishii) and was earlier involved in producing films like The Wolf Children and Confessions. Also, in terms of animation Tonko House isn't flying solo either and teamed up with Craftar and Japan based Marza Animation Planet (of Space Pirate Captain Harlock fame). Collaborations like these are far from a rarity in the world of animation, but for Tonko House--a young & small studio with big ambitions--it almost seems a necessity. While this might sound a little harsh and I might be wrong, the end result is what counts and it is more than pleasing to the eye.

Taking place in a somewhat desolated world filled with grassy hills and the occasional rubble, we meet the short's titular protagonist Moom, who simply is the epitome of cuteness. Every day new rubble arrives, each with its memory still attached and occasionally a memory that can't let go comes along. Moom is one of those memories and ended up becoming the little helper of a nameless character who's job it is to free those memories. One day Moom finds a box with a pair of ballet shoes and attached to it is a memory just like Moom. She has lost something, which blocks her of moving on and so their journey to help memories let go begins.

Kondo & Tsutsumi's short, which is about 13 minutes in length, seems to be quite different compared to their debut feature. While still innocent and colorful, The Dam Keeper handled its themes in a dark and adult way, delving on the fears of rejection and isolation many experience during late childhood. Moom on the other hand is more at the opposite side of that spectrum. With its anthropomorphic Pig & Fox, The Dam Keeper certainly had its dose of "kawaii-ness", but Moom easily surpasses that, which isn't strange as it seems to be aimed at a younger audience. This can be seen by its visuals and the type of story it tells, but is just as much underlined by Moom's sound design. Little Moom doesn't know how speak, instead he--or at least I guess Moom is a he--makes baby sounds. Also, when memories detach themselves, we can hear children laughing. In a way this reminded me of BBC's pre-school children's television series Teletubbies. Kiddy, yes, but with the big difference that Moom actually has something meaningful to bring to the table. Another interesting choice of sound design can be heard in a scene where little Moom and his spacesuit friend are flying a helicopter. Instead of realistically mimicking the noise of a flying helicopter, directors Kondo & Tsutsumi decided to use something that just vaguely resembles it. A bit like onomatopoeia and reminiscent of what maestro Miyazaki Hayao did in his last feature Kaze Tachinu (The Wind Rises).

In terms of visuals the Tonko House duo made a bold move to do something different compared to what they did in The Dam Keeper. Filled with oil pastels, charcoal drawings and brush strokes, The Dam Keeper managed to highly impress me, so it was a bit of a let down to see them letting go of this gorgeous rough painterly style they achieved there. On the other hand, as much as I loved that, it's great to see Kondo & Tsutsumi aren't willing to get stuck in set patterns. Instead, they chose to be the creative persons they are and continued to evolve. In terms of visuals, Moom's detailed looks make a nod to their Pixar background. Not only as they chose to use a more evident CGI look--which was somewhat hidden in The Dam Keeper--but also in terms of color choice, which reminded me of Monsters University (where they were responsible for its art direction). And best of all, while I was missing the painterly look from The Dam Keeper, Moom definitely has the beautiful Tonko House touch. Directors Kondo & Tsutsumi are simply genius masters in playing with light and this is something that clearly shines through in all of Moom.

Moom's soundtrack was pretty sweet as well. Composers Zach Johnston & Matteo Roberts, who earlier managed to elevate The Dam Keeper's emotional impact to an even higher level, also composed Moom's orchestrated soundtrack. This time it made a little less impact, but I guess that's due to the more simplistic nature of Moom's story, which just didn't give the amount of room to create something like that. Nonetheless, I very much liked what they did here.

What's interesting to note is that, as kiddy as Moom may seem, this animated short still managed to touch my heart. Having been diagnosed with post traumatic stress myself before--did I just write something this private on the internet?--I know how difficult it can be to let go of some of stuff that happened in the past. And this is exactly where Moom manages to shine a gentle ray of light. Some memories can be easily set free, others just need more time. But no matter how long it takes, in Moom we see it can always be a new source of life. When the memories detach themselves from their objects, all kinds of plants and flowers grow on top of them. Letting go of memories gives life. Moom just wasn't ready earlier. Maybe I am now. If only a little bit.

For those who haven't already, check out out Moom's teaser below.
Highly recommended!