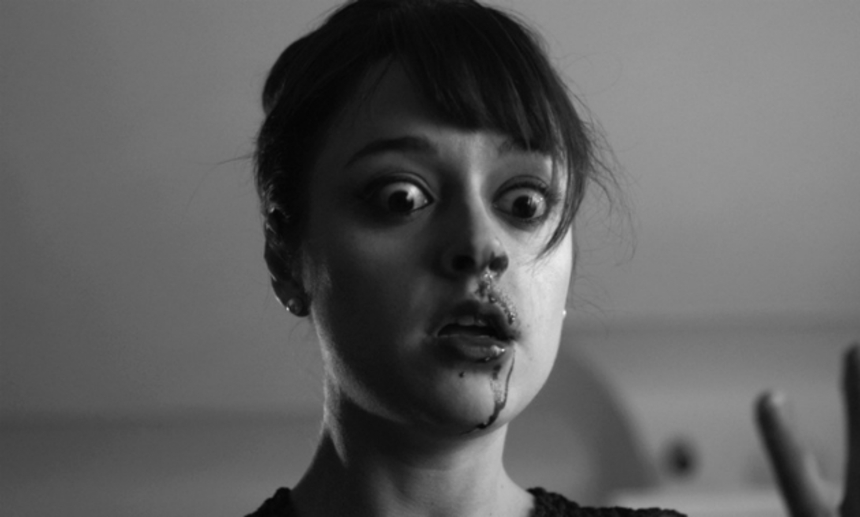 In the last few years, writer-director-producer Mickey Keating has established himself as a prolific genre filmmaker, and his film Pod was released just a few months ago. Darling, his latest work, is a low-key psychological thriller that draws from a number of films about isolation, most notably Roman Polanski's Repulsion. However, Darling lacks the patience of its biggest influences, and its overbearing attempts to frighten the audience end up derailing an otherwise moody and intriguing effort.
Lauren Ashley Carter (also featured in The Mind's Eye) stars as the titular character, a mysterious girl employed as the caretaker of a gorgeous New York brownstone while its owner (a cagey Sean Young, appearing in just a few scenes) is on vacation. Darling brushes off the owner's warnings about the house's ghastly history, but can't stop herself from slowly falling under the thrall of the malevolent forces that haunt the home.
Darling feels familiar, drawing heavily from stories of isolation like The Shining or The House of the Devil. Keating does a good job capturing the moodiness and isolation those films so memorably evoked, and Darling's stark black and white photography is often coldly gorgeous. However, while the film is happy to nod to the moody tones of its influences, it's noticeably missing two pivotal elements - strong characters and a patient approach.
The character of Darling is a blank slate, given only slivers of backstory, which makes her descent into madness more of a generic inevitability than a tragic transformation. It's a shame, because Lauren Ashley Carter is quite good when the film gives her something to do besides stare blankly into the camera. Keating delights in lingering on her large, distrustful eyes, and Carter skillfully alternates between hugely likable and deeply unnerving depending on the scene. However, she's mostly stranded by Keating's script, and struggles to make lengthy scenes of Darling alone in the home compelling.
Darling's fatal flaw is its particular brand of horror, which consists almost entirely of shrill music and hallucinatory images cut into otherwise sedate scenes. Plenty of films have done this kind of auditory hellscape well, but Darling comes across as impatient, bombarding the audience early and often. The most frustrating element of this approach is how artificial the scares feel, inserted during post-production instead of organically teasing out the creepiness that's inherent to the source material.
Tellingly, the film's best scene is also its most restrained, a tensely seductive conversation between Darling and Henry (Brian Morvant), a man who she stalks for fairly predictable reasons. Unfolding in a single shot, this scene builds an unsettling tension that pays off quite nicely, and the effectiveness of this scene only emphasizes how ill-suited Keating's intrusive approach is to this sort of film.
Shrill, overbearing, and decidedly uninspired in its scares, Darling is one of the most frustrating titles to play Fantastic Fest this year. The things that work, like Lauren Ashley Carter's unnerving performance or the evocative photography, are buried under a heavy, overeager directorial hand, and Mickey Keating's thin script and overwrought approach to scaring the audience make the film an ultimately unpleasant experiment.
Review originally published in connection with Fantastic Fest in October 2015. The film will open in select theaters in the U.S. on Friday April 1, and will then be available to watch via various Video On Demand platforms on April 8.
Sign-In to Vote
Tweet 0 Submit

Do you feel this content is inappropriate or infringes upon your rights? Click here to report it, or see our DMCA policy.
Brian MorvantLarry FessendenLauren Ashley CarterMickey Keating

I never walk out of movies, but I walked out of this one. incredibly tedious.

Yeah, overbearing is definitely a word I'd use, not a good sign in a purposefully minimalist film. There's so many bang-thud-jumps with high pitched tremolos that it goes into self parody. Felt like a pretentious, amateurish student film (as far as content goes).

When I saw the image of the main actress I really thought of Aubrey Plaza at first. I would've watched the movie instantly if it was her ;)