Review: BELGICA Surprises, Except When It Doesn't 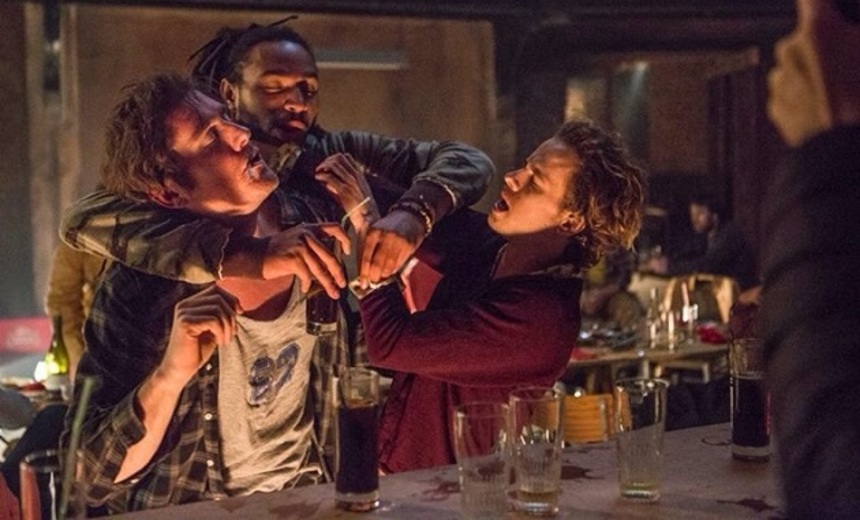 Belgian director Felix van Groeningen managed to make major waves internationally in the art-house circuit with his films The Misfortunates and especially The Broken Circle Breakdown, so I was quite happy when one of the surprise films of the International Film Festival Rotterdam turned out to be Felix' new film Belgica. In that same week, Felix won Sundance's best director award in that festival's World Cinema Dramatic section.

In Belgica, we follow Frank and Jo, two Flemish brothers who are on the path of starting a legendary bar-dancing together. Frank is a brutish but good-natured guy who has been on many strange (and unsuccessful) financial adventures already, to the exasperation of his wife. Yet he doesn't hesitate a moment when he spots an opportunity to enlarge the bar his younger brother Jo runs, adding a hall right next to it so larger bands can give performances for larger crowds.
Jo is small, student-like, obviously the smarter of the two, and a bit cautious at first when confronted by all of his brother's wild plans. But Frank's enthusiasm is contagious, and soon their bar Belgica re-opens as a nightclub, one which quickly gets famous and successful.

But with success also comes problems. As Belgica becomes more and more popular and crowded, the brothers need to address how to deal with criminals, and with the authorities, who can no longer turn a blind eye to the club's obvious flaunting of safety, labor and tax laws. But the worst problem is the brothers themselves: while Jo grows to become the businessman such a big venture needs, Frank constantly indulges in sex, drugs and booze, and fails to see they are no longer just a group of friends running a fun bar. Tensions grow until they come to an unavoidable head. As in his previous films, Felix likes to show society from the bottom up, focusing on a group of rebellious characters who get quite a share of life's nastier knocks. Both Jo and Frank are initially sympathetic anti-heroes, and Belgica shows them trying to get by in their dreary days and flashy nights, both managing to lose and regain the audience's goodwill several times over.

Also great are the look and sound of the film, both of which are loud and colorful and grimy and harsh. During the rebuilding of the bar into a club you can taste the sawdust, during the evenings you can smell the beer, and during the film's many, many pumping music performances you feel like you're there, sweating with the rest of the attendants. The soundtrack especially is a treat, with an impressive selection of bands new and old, famous and "indie", and from diverse genres, often appearing in the film as themselves. This may be Belgica's most winning aspect: it manages to recreate the experience of going to a party where the music is too loud and most of the people are too drunk, yet where there is just enough "awesome" mixed into the atmosphere to explain why folks look forward to going to such a place.

If Belgica has a strike against it, it's probably that we have seen so many "rise and fall" films already that its story suffers from a lack of surprise. For all its flashy execution and natural acting, the main story itself is rather predictable and mundane. You figure out where this is heading pretty quickly, and all that remains plotwise is to see which of the well-trodden paths is taken for each character. Felix van Groeningen and Arne Sierens loosely based the script on the real bar-club "Charlatan" in Ghent, which was run through a similar rise-and-fall-lifecycle by Felix' father, and this obviously has both pros and cons. It accounts for events staying rather down to earth, but also allows for the incredible attention to detail seen in the film.

All in all it marks Belgica as an impressive, if slightly too long film, in which all parts surprise with their quality, yet the sum of them doesn't quite strike gold.
But even when left with silver, Felix van Groeningen has plenty to be proud of. Definitely more than his protagonists, at least...

(Belgica is currently in general release in Belgium and the Netherlands, and has been picked up in Berlin by Netflix for international distribution.)

Do you feel this content is inappropriate or infringes upon your rights? Click here to report it, or see our DMCA policy.
Felix van GroeningenRotterdamArne SierensStef AertsTom VermeirStefaan De WinterDominique Van MalderDrama