Review: AN Advises Everyone A Hearty Carpe Diem 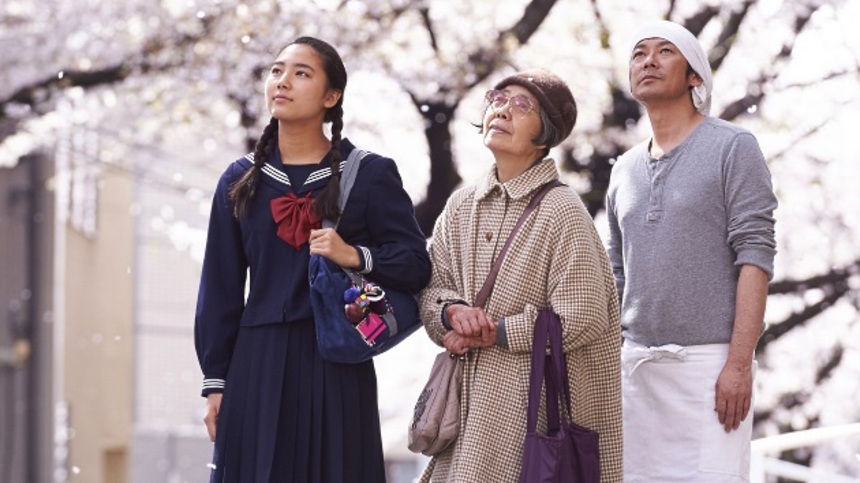 Japanese director Kawase Naomi's film An (also known in some territories as Sweet Red Bean Paste or just Sweet Bean) played at the International Film Festival Rotterdam this February, where it turned out to be a crowdpleaser. Audiences awarded it a whopping 4.5 out of 5, making it the highest rated Japanese film of the festival, placing it in the Top-5 even. Not bad for what -on paper at least- seems to be a pretty sugary "life's lessons" movie.

While I managed to miss the film during its festival run, thankfully it arrived in Dutch art-house cinemas a few weeks later, allowing me to go see why An generated so much festival buzz. The result surprised me, and actually made me cry, the first film managing to do so this year. So, what's it about?

In An, Sentaro is a forty-something man who sullenly runs a stall which sells dorayaki, which are folded pancakes with sweet red bean paste (called "An", yep, there's the title) in them. One day, a very old woman asks if she can work in the stall. Sentaro refuses her as she is 76 and somewhat infirm, but the woman is stubborn and also tells Sentaro her An is a lot better than the pre-fab canned stuff he uses.

Sentaro caves when the woman, called Tokue, gives him a sample of her An. Shocked by how good it is, Sentaro allows Tokue to work at his stall and teach him how to make the stuff himself. Of course they become friends. Of course she teaches him some valuable life lessons. Of course the stall blooms financially, as the increased quality of their produce attracts more customers. And they all lived happily ever after. Except...

By now you might expect this to be a pretty standard feel-good film, and that certainly is the path director Kawase wants you to take. Except there is a reason Sentaro is stuck behind a stall at his age, same as there is a reason Tokue never became a paid cook in her prime. There is a reason why "seize the day" is the best (and maybe the only) option left to them. Both have basically been deliberately placed outside of society, and especially Tokue's story, once it becomes known, is very shocking indeed.

In fact, I was surprised nobody mentioned these backstories before I saw the film, either in reviews, tweets or festival blurbs, because it pretty much pulls the entire film off of its "feelgood" path, and sets it on another one which is quite a lot more bitter. I've struggled with the question of whether I should mention the central themes of the film's second half, because there sure is a lot of interesting history covered, history which I was pretty much unaware of. But I've decided against it. Spoilers need not only be found during a film's finale. Just know that An is not as saccharine as you might fear.

That the film works as good as it does has a lot to do with the acting of its three leads. Yes, there is a third I haven't mentioned yet, a schoolgirl called Wakana, who is set upon a path outside of regular society, same as Sentaro and Tokue had happen to them, and she is admirably played by Uchida Kyara, in her second big role after Hirokazu Kore-eda's I Wish. But stealing the show are veteran actors Nagase Masatoshi and Kiki Kirin as Sentaro and Tokue, who marvelously provide the necessary chemistry.

With An, director Kawase Naomi has managed to make a stellar bittersweet film. She could have made it a sugary pancake, but some of its stuffing caught me by surprise, and the film as a whole is a dish I very much recommend.

(An is currently doing the rounds in arthouse cinemas worldwide)