Black Bodies In White Hands: On MORRIS FROM AMERICA 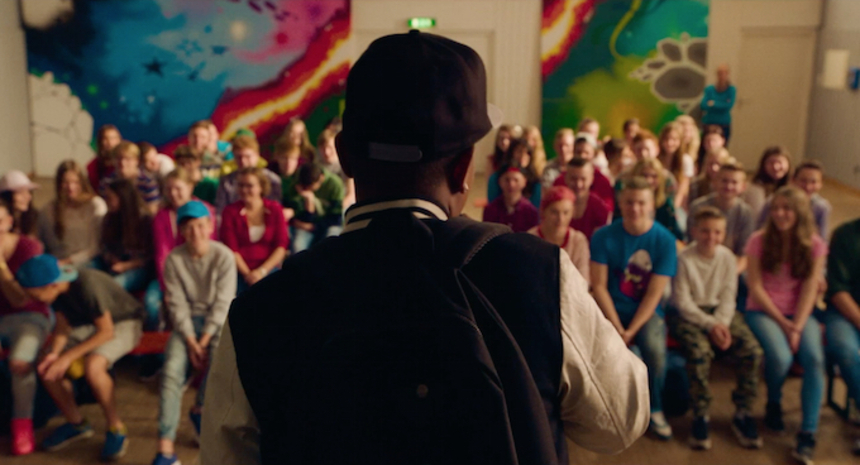 Let me set a scene for you. A few years back at a party for filmmakers one white filmmaker who has written and directed a critically acclaimed film with black leads says to another who has done the same: "I cast African Americans in my movie because I thought it would help me. It won me an award but nobody's seen my movie. I'll never make that mistake again." An acclaimed black director observes, aghast.

Upon hearing this story I shook my head and nodded. This isn't new. The pillaging and embrace of our stories and our bodies for accelerated acclaim is a tale as old as time, many of them are our most canonical tales of black American life: Uncle Tom's Cabin, The Adventures of Huckleberry Finn, Porgy & Bess. That, in hindsight, our bodies were accessories in the white imagination or that those stories became tools to further oppress us when dissecting these "masterpieces" now makes our relationship to them even more complex. Hindsight is our fear when we observe you telling our stories and winning the awards. In the back of the minds of every black and brown person is the constant "Why, though?".

Yet, in my mind, I'd rather be able to ask the question "Why, though?" than not have the opportunity at all. This, perhaps, is what compelled me to write a response to IndieWire Playlist reviewer Sam Fragoso's Morris From America review. In it, Sam begins by referencing the recent cause celebrè, #OscarsSoWhite (the only racial conversation it seems many in our industry are willing to actively and animatedly engage with in the public eye). He comes out the gate running with this damning critique: "Focused on fetishizing rather than intimately depicting, director Chad Hartigan has produced a warm-hearted yarn that treats its two African-American leading men like props in his white-washed game of chess." Damn.

In one sentence, Fragoso has stopped thirty-five young white filmmakers with the means to disrupt the amount of white faces we see on screen from wanting to do it at all. They will ask themselves, "Why, though?" and then go back to writing movies about white guys who don't have social skills repairing a broken heart in the arms of a woman who dresses like Grimes and drinks him under the table. While I admire the social impetus behind posing said critique, Fragoso undermines his own call for a world where the Oscars aren't so white. It is not disingenuous to say that because of racial and economic inequalities that exist in our country it will always be easier for young white filmmakers to tell stories than it is for young filmmakers of color (This essay from The Atlantic gives a detailed analysis of why white millennials are able to excel in the arts faster than millennials of color). So, in my mind, it is imperative if we want to diversify the faces we see on screen it's by encouraging instead of discouraging white storytellers to attempt to tell stories with black and brown people at their center, even if they stumble along the way.

In Morris From America, Hartigan follows Morris (a deeply charming Markees Christmas) who has moved to Heidelberg, Germany where his father (played with nuance and depth by Craig Robinson) is a soccer coach. Morris doesn't like being in Germany. He misses Richmond, he misses his friends, and most of all he seems to miss his mother who exists as a sort of ghost that roams over the film and guides every choice our characters make. When his tutor (a surprising Carla Juri) pushes him to join the local community center to make new friends with whom Morris can practice his German he relents, and thus our outsider coming of age tale begins. He has a hard time making new friends until he sees a beautiful, young woman (Lisa Kerner) who sees his youth and finds it charming. Morris falls in love, this is when our hero's troubles begin.

Sam Fragaso, I should mention, is white. Like many young white people who have begun the work of pushing against white supremacy, I fear that he has used a tool that helps sustain it: erasure. What seemingly bothered him the most about the narrative Hartigan presents us with was the accumulation of micro aggressions that Morris begins experiencing after joining the community center and falling for the young woman, Katrin: "Slowly, though, the film drifts away from the concept of two wide-eyed teenagers excited by the unfamiliar (and new) sensations of lust. Katrin devolves into caricature, angsty and angry, disingenuously fixated with Morris' blackness -- especially his aspirations to become a rapper. In fact, all of his peers approach Morris as if it's the first time they've interacted with a person of color." (<<P.S. it probably is their first time.)

What for me was the defining quality of the narrative was for him a deep point of contention. In our "post-racial" society many white people feel like any presentation or acknowledgement of race feels like it reaffirms it. This is a fallacy, one that Claudia Rankine exposed in her National Book Award nominated poetry collection, Citizen, which compounded the micro aggressions black Americans hear everyday as the skeleton of black citizens. When Morris is confronted by his Community Center teacher with an accusation of weed smoking on campus I clutched my chest with recognition, when his paramour asks him if he has a big dick with a coquettish smile I winced thinking of James Baldwin's quote that for his lovers "the size was the color and the color was the size", and when his father (an astounding Craig Robinson) leaves him alone and essentially tells him you're different than these white kids I clapped because my mother had to tell me the same thing.

What makes Morris From America a fascinating and needed "coming-of-age" narrative is that Morris doesn't just come to adulthood he comes to black adulthood. The observations of what shapes the lives of black people in America and abroad are not unique to Hartigan but they are unique to black people in the hands of white writers. One does not know they are black until they are showed by the actions of others. The fact that Hartigan seems to have observed that tells me that these black bodies were in good white hands. To see that these observations were seen as disruptive to a film Fragoso felt was "well-intentioned" and "charming" at first makes me feel that he deeply misunderstood the DeRay he references in his closing. A recognition of the world's fixation on blackness and how whites imagine it, isn't an implementation of white privilege but a means of wrestling with it. For this writer, it was astonishing to watch Hartigan begin his match, and I hope I'm allowed to see more white storytellers wrestling with the same.

Yet, what to do with those who still use black bodies as props? How do we engage with stories written by white people with black and brown bodies at the center? For me, the answer lies in placing them next to ones written and directed by black and brown people as well, by having the work dissected by multiple voices of color before it gets to the point of programming. While Sundance did a great job this year of having a good number of black voices and bodies in the program (How Not To Be A Douchebag, Sleight, Life Animated and more were all directed by black people), they do still have a race problem on the programming side from my POV over the weekend. Moreover we have to continue entering into conversations about race in films with "Why, though?" moreso than "Why? No..." because otherwise the conversation ends there.