Review: NEERJA Is The Story Of A Heroic Woman Told With Grace And Humanity 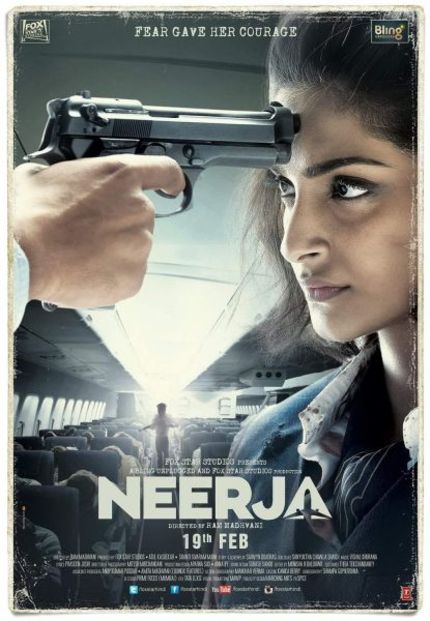 On September 5th, 1986 during a stopover In Karachi, New York bound Pan Am Flight 73 was hijacked by Palestinian terrorists. This airliner, packed to the gills with 379 passengers and crew, was then held hostage for 17 hours by these five men who had intended to divert the plane to Israel where they had planned to fly it into a building. When the pilots abandoned the plane as per protocol to avoid leaving anyone capable of succumbing to the demands, the next in line as commander of the aircraft was 22 year old Neerja Bhanot, part-time model and first time head bursar.

In what has become an iconic tale of real life heroism, Bhanot managed the crew and passengers and, through quick thinking and selfless action, managed to save the lives of nearly all of the passengers on board almost single-handedly. In the end, she was cut down by bullets from the terrorists while throwing her body between three small children attempting to flee and agitated gunmen as their plan collapsed and they descended into panic.

This is heavy stuff, folks, and handled improperly Neerja could have been disastrous. All of the signs of a poorly made hagiographic biopic were there. A director with little to his credit apart from a career in advertisements, a story so heavily drenched in reverence that there is no room for error, and most worryingly, a lead who had not shown any inclination toward the kind of dramatic chops that might be required to pull off this incredibly difficult and emotionally fraught performance. Sonam Kapoor, who plays Neerja in the film, is an actress best known for playing bubbly twenty-somethings in comedies, not a terribly great actor, but fun to watch and she wears clothes very well. Her casting in this film has been a surprise to many who understand just how crucial the role is, but, to all our amazement, she pulls it off with a mix of solemnity and humanity that she's never shown before.

The film opens with Neerja coming home to an evening party desperately in need to some charisma, which she provides in spades. Leaping into the role of MC she introduces dancing children, forces her parents to sing karaoke, and generally becomes the life of the party with a kind of bubbly spirit that matches her huge smile. When she readies herself to hop onto her Bombay-NYC flight later that evening, she is doted on by her mother to make sure that she's got everything together.

There is a moment very early in this film where, during a last minute conversation with her mother Rama (played to heart-wrenching perfection by Shabana Azmi), Neerja confesses to having lost a ring that was a gift. It's a small thing, but it perfectly sets up the kind of film we're moving into. It is a chink in the armor of this beautiful, bubbly, carefree young woman, and this is only a part of her own humanity that will soon be tested. Neerja isn't perfect, and this is crucial to delivering the kind of tone that saves the film from falling over the edge of reverence and staying within the real world she inhabited.

While the vast majority of the film takes place within the cabin of the 747, director Ram Madhvani and screenwriter Saiwyn Quadras wisely link the film to different spaces in the outside world to remind us of the tension within. Neerja's flashbacks in the film help to round out a character already seen as heroic in the popular imagination of Indians and give her courage a basis in her own past experiences. Without these connections, there would be no characterization at all in the film, as none of the other ancillary characters get any hint of backstory at all. Fair enough, the film is titled Neerja, after all, and it is her story that is the one that everyone knows, but it is for good reason and the film makes excellent use of her life story, dramatized of course, to bring true life to this angelic martyr figure.

Sonam Kapoor's performance as Neerja is remarkably nuanced and definitely shows a side we've never seen. Whether it's because she didn't have the right material, right director, or proper motivation doesn't really matter anymore, she has shown what she can do, and with this film she plants her flag as an actor and not simply a movie star. Her ability to move from abused spouse to effervescent party girl to commander in charge of an occupied airliner is remarkable, and she flexes acting muscles that most Indian actors don't even know exist.

Utilizing her troubled history as motivation and the impetus behind her decisions that ultimately lead to the rescue of 359 civilians is wonderfully done. She isn't impervious to the chaos and tragedy unfolding in front of her in real time, she acts, she reacts, and from time to time she breaks down. But every crack is filled in to become twice as strong, and Neerja the film is all the better for it.

Lest I be accused of being in the bag for this film, let me state for the record that I had no intention of even seeing it before a screening became available at the last minute. I'm not a Sonam Kapoor fan in general, and this story was not one that I was familiar with beforehand. It's also not exactly a perfect film. From time to time, especially during the last third, it does digress from the excellent storytelling into mushy sentimentalism, and the final reel features a three hanky speech from Shabana Azmi that is exactly the kind of expository screenwriting that smacks of laziness to me. However, every bit of it, even that speech, is delivered so convincingly that it's hard to fault the film or the director's for including it, even if it takes a bit of the edge of realism off.

However, as tempting as it is for me to judge a film for its faults - they don't call us critics for nothing - I'd much rather applaud the work that's been done here. Neerja is emotionally draining, remarkably tense, and surprisingly suspenseful, especially for a true life story where we already know the tragic end. Kapoor, Azmi, and director Madhvani deserve huge kudos to delivering this film with the kind of grace and humanity that the story deserves. Neerja the person wasn't perfect, and that's part of the beauty of her heroism, but Neerja the film is about as close as an adaptation of this story could be coming from modern Bollywood obsessed with image and flash. This is a film worth seeing.

Do you feel this content is inappropriate or infringes upon your rights? Click here to report it, or see our DMCA policy.
neerjaram madhvanishabana azmisonam kapoor