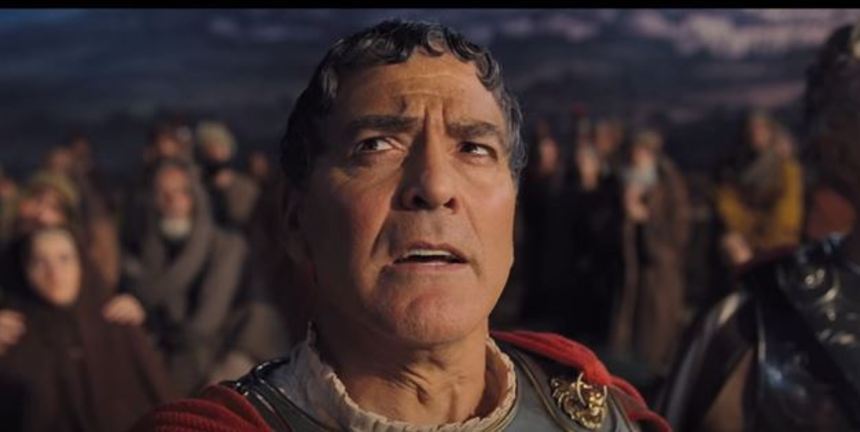 Hail, Caesar!, the latest film from les frères Coens, is many things all at once. First, it's likely their least commercial film in decades. The audience greeted the closing credits with the kind of stunned silence that usually precipitates indifference, a state which is perhaps far worse than backlash.

Yet at the same time, for those that gulp thirstily the kool-aid proffered by these genius brothers, the film is a knockout. It's the most bombastic, resolutely silly film of theirs in some time, a ribald, raucous revisiting of themes last explicitly touched upon in Barton Fink. They've taken the Jobsian existential angst of A Serious Man and given it a Hegelian/Marxist dialectical slant, colliding disparate forms of old, glamourous Hollywood with a gritty noir vibe. This is the unholy love child of MGM extravaganzas and Warner Gangster pics, with a bunch of RKO Auteurism thrown in for good measure.

Lensed by supreme maestro Roger Deakins, the imagery pops off the screen, from a Malibu haunt to exquisitely choreographed song, dance and swim numbers. The Spartacan biblical epic within drips with golds and reds, while the stage-set musical Western is all azure blues and gritty tans.

The central figure is studio head Mannix, played with aplomb by Josh Brolin. Torn between his disparate charges, he's a man of sin finding himself compulsively confessing, with everything in his life seemingly taking place exactly on the top of the hour. It's a world of twin gossip girls, of forced dates and adopting one's own child. It's lunacy writ large, yet with an undercurrent of malice.

Yet the threads of narrative are sparse, and for many this will be merely a whirling dervish of scenarios amounting to little. Narrative has rarely been the central point in a Coen flick, but here it seems even more tangential, as much of the enjoyment simply comes from the collision of moods. There's small pieces to draw from - a repeated phrase uttered by a director, a creaky door, the swinging of a rope, the thwack made when the bottom part of a swim costume is removed. Each of these pieces is a delight, yet each may not add up to the fulfillment that some will require.

However, it's in these brief moments that one can grab onto the charm of the piece. It's through these disparate elements colliding that one can find some sort of whole, a broadly comic, boldly political movie about keeping a circus from collapsing in on itself. We've got commies and comics, tap dancing sailors and suitcases that need to be belted, and somehow when it's done it makes sense, sort of.

I couldn't begin to place the film within the pantheon of the Coens' work, save to say that they probably haven't had this much silly fun since The Hudsucker Proxy. There's a sheer joy in the telling, an exuberance that's infectious. Several of the ensemble are regulars from the Coens, and others are borrowed from Wes Anderson's troupe, adding a slice of raw zaniness to the mix. This is Trumbo without the torturous speechifying, showing the underbelly of red-scare Hollywood at its most ridiculous and surreal.

If Barton Fink is all Old Testament, with curmudgeonly Jews dealing with fire and brimstone then this film is their most Goy yet, a New Testament with hopes of redemption drawn from a sea of sin. The rosary beads and confession booth speak to the hope of making things right, while the bribery, threats and competing blackmail, combined with the suppression of sexual impropriety, make for a far more Christian take on the mores of classic Hollywood. There's still an unseen voice speaking from New York with an overtly Semitic moniker (in whose name thou shall not speak in vain lest ye be slapped repeatedly), but this son who makes things right and takes on others' sins forsakes the easy life for the hard, shepherding his charges through the daily whims of production, finding transcendence in the images that are the final manifestation of his good work.

Hail, Caesar! is both embrace and slap-in-the-face to 50's Hollywood, the contradictory actions that we see exhibited several times by the characters on screen. It's not often the Coens' get accused of being "kooky", but here they let it all hang out. With near-perfect staging they show the majesty of the last throws of Hollywood's Golden Age, as well as the preposterousness of the whole thing. As per one of the dangling plot points the future may lay in aviation, a more fitting and guaranteed path to being lucrative, but the challenge of making sense of the nonsensical, of herding the crazy cats of show business to craft something indelible and immortal for the screen, is irresistible. This is the film about the past and the future and how sometimes we can't tell one apart from the other. It's a riff on their references, a love letter to a lost age. It's, in short, kind of astonishing.

Few will hail Hail, Caesar!, but for those game for this brilliant little romp by the brothers Coen they'll certainly be in for a good time.

Do you feel this content is inappropriate or infringes upon your rights? Click here to report it, or see our DMCA policy.
Coen BrothersGeorge Clooneyhail caesarJames BrolinScarlett Johansson