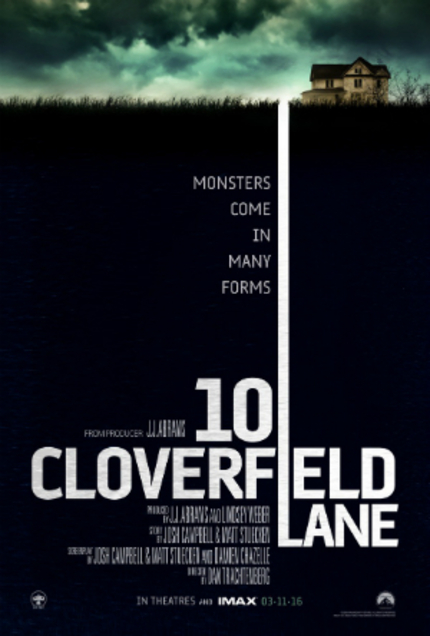 UPDATED 2/29: The opportunity is now closed. Thanks to all who entered!

Did the debut of the first teaser for 10 Cloverfield Lane catch you by surprise? Frankly, I was shocked that producer J.J. Abrams and company were able to pull that one off about six weeks ago. Now the film's premiere is coming up fast -- and you might be able to attend.

Abrams has been careful to describe the movie as *not* a sequel, and the teaser and subsequent trailers have backed that up. Here's the official synopsis:

Waking up from a car accident, a young woman finds herself in the basement of a man who says he's saved her life from a chemical attack that has left the outside uninhabitable.

Mary Elizabeth Winstead stars as the young woman, with John Goodman as the basement-dwelling savior and John Gallagher Jr. as, apparently, another person "saved" by Goodman. Dan Trachtenberg directed, drawn from a screenplay by Josh Campbell and Matthew Stuecken, and Damien Chazelle (Grand Piano, Whiplash).

The film is set to open wide in theaters across North America on Friday, March 11, but before that happens, it will have its premiere on Tuesday, March 8, 2016 at 7:30 PM at the AMC Lincoln Square IMAX in New York City.

If you would like an opportunity to attend the premiere, please send us an email with your name and address and confirm that you are a U.S. resident. We'll select 25 people at random from entries received by 12:01 p.m. E.S.T. on Tuesday, March 1, 2016 -- that's tomorrow! -- and provide those 25 people with a private link where they can then enter for the opportunity to win an ADMIT TWO first come, first serve pass to the premiere. Don't delay!