Glasgow FrightFest 2016 Review: ANGUISH Is Two Films In One Body 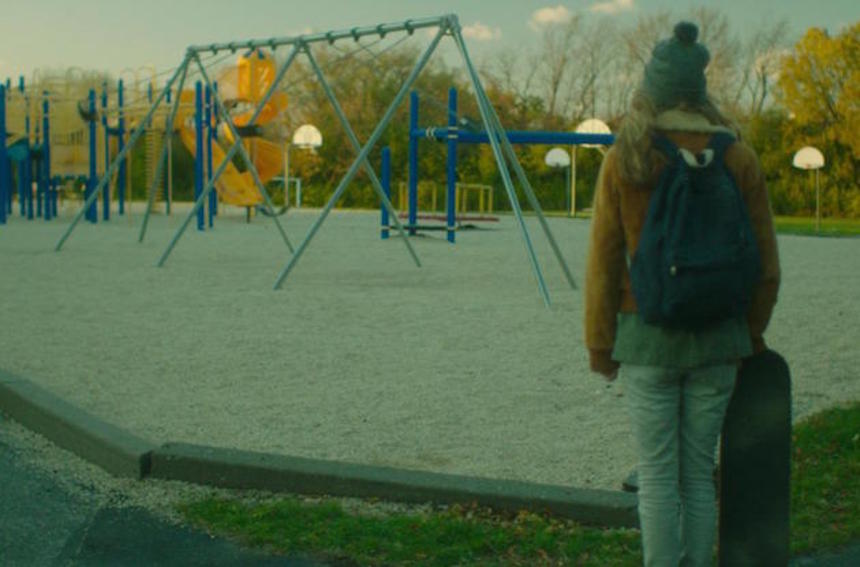 A mother Sarah (Karina Logue) and her teenaged daughter Lucy (Amberley Gridley) are out driving. "It's not fair!" complains Lucy, upset about the boundaries being imposed on her adolescent conduct. This leads Sarah to cite the traditional saying amongst the womenfolk in her family: "If your aunt had a moustache, she'd be your uncle." In anger, Lucy steps out of the car --- and right into the path of a passing truck.

This prologue to Anguish lays out all the film's key themes: frayed mother-daughter relationships, the desire to cross forbidden boundaries, the fluid nature of identity (inscribed in that peculiar saying, repeated several times over the course of the film), and of course death.

If Lucy's passing leaves a painful gap, then the subsequent arrival of the similarly aged Tess (Ryan Simpkins) in this Missouri township with her mother Jessica (Annika Marks) goes some way to filling it. Yet for all the peace and quiet of the cool country air, Tess' dissociative identity disorder only gets worse in their new home. The voices that this withdrawn, sensitive young woman hears, and that keep her up at night, might just belong to the dead, yearning to cross back over through her --- and Lucy, always a determined rule breaker, is pushing to be first in line to move in with this new arrival and return to the life she so suddenly left.

This impressive and singular feature debut from writer/director Sonny Mallhi is perhaps best described in terms of what it is not as much as what it is. Unlike most genre films about a young Christian woman's possession, this is not concerned with the exorcism of demons. Horrified by Tess' supernatural powers, out-of-his-depth Father Meyers (Ryan O'Nan) offers to consult the seminary in St Louis, but Jessica's mental image (briefly if vividly realised on screen) of her daughter held down screaming by priests is enough to make her reject the option of exorcism, and so to turn her back on a wellworn movie trope.

Instead of resorting to fathers --- in a film where both Lucy's and Tess' real fathers are also pointedly out of the picture --- Jessica strives to confront Tess' divided self with another mother, Sarah. These two women, in different ways, both struggle to work through their sense of ambivalent love towards two lost souls; the one dead but desperate to live again, the other alive but barely keeping her grip on the world. Needless to say, Anguish passes the Bechdel Test with flying colours. Tess, though certainly objectified and exploited (from beyond), is also a well-observed, if necessarily not quite fully formed, character in her own right. She's an adolescent at a (sometimes literal) crossroads, uncertain of who she is or how to assimilate to her new environment.

Preoccupied with the haunting of both an individual and of a community, Anguish has its creepy moments --- but these are offset by an autumnal lyricism, and a focus on the interplay between Tess' teen alienation and her fraught attempts to find her place. Text at the beginning of the film gives statistics on serious mental disorder among American children, and text at the end (with an accompanying still photo of a woman) states baldly --- albeit improbably --- that the film was "inspired by true events." Finding your way from the one assertion to the other is less straightforward than it sounds - and it is never clear whether Tess has been misdiagnosed with a mental illness that is in fact a supernatural gift, or her actual mental illness makes her particularly susceptible to spiritual takeover, or whether grief and loss themselves, spreading through town, have become a kind of collective psychosis.

Either way, the film treats both Tess' condition, and her subjectivity, with a sensitivity that is not always conspicuous in the horror genre - helped greatly by Simpkins' schizophrenic performance, part shrinking, part assertive, but always understated. Think Audrey Rose (1977) merging her identity with the smalltown coming-of-age melancholy of Jamie Marks Is Dead (2014).

Do you feel this content is inappropriate or infringes upon your rights? Click here to report it, or see our DMCA policy.
AnguishGlasgow FrightFest 2016Ryan SimpkinsSonny MallhiAnnika MarksKarina LogueCliff ChamberlainDramaHorror