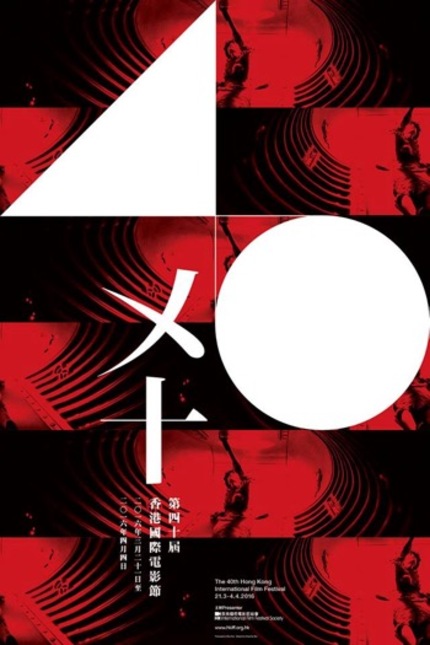 The Hong Kong International Film Festival celebrates 40 years of bringing the best in world cinema to local audiences next month, with more than 285 feature films screening between 21 March and 4 April. Sharing opening duties this year are Chongqing Hot Pot, the belated new film from One Night At The Supermarket director Yang Qing, followed by the Johnnie To-produced Trivisa, which recently had its world premiere at the Berlinale.

Both films put a playful spin on the crime genre, with Chongqing Hot Pot featuring two of the mainland's biggest stars - Chen Kun and Bai Bai He - as class mates who open a restaurant in an old bomb shelter, only to discover they can access the underground vault of the bank next door. Trivisa sees three of Hong Kong's most promising young directors - Frank Hui, Vicky Wong and Jevons Au - each follow one of the principle characters as they plot a pre-handover heist.

Closing the festival will be the Asian premiere of Kurosawa Kiyoshi's Creepy, which sees the Pulse director return to more unsetlling material following his recent success with offbeat fantasy Journey To The Shore. Other gala screenings at this year's festival include the world premieres of anthology Beautiful 2016 (this time featuring segments from Jia Zhangke, Nakata Hideo, Alec Su and Stanley Kwan) and Herman Yau's psychological thriller Nessun Dorma.

In addition to Crosscurrent, a number of other Berlin winners will screen at HKIFF 40, including Grand Jury Prize winner Death In Sarajevo, Lav Diaz's 8-hour epic A Lullaby To The Sorrowful Mystery, which won the Alfred Bauer Prize, Tomcat, Barakah Meets Barakah, Those Who Jump, and shorts Batrachian's Ballad and Anchorage Prohibited.

Other highlights of this year's festival include In Memoriam screenings of classics from filmmakers who have recently passed away, including Manoel De Oliveira’s Visit Or Memories And Confessions, Haskell Wexler’s Medium Cool and Pamela Yates’ recent documentary on the famed cinematographer, Rebel Citizen. Chantal Ackerman’s final film, No Home Movie, will screen alongside her career-defining Jeanne Dielman, 23 Quai du Commerce, 1080 Bruxelles, as well as Jacques Rivette’s Cannes Grand Prix winner La Belle Noiseuse.

The festival will also celebrate Jet Tone Films, the company founded by Wong Kar Wai and Jeff Lau, with screenings of all their releases, including The Eagle Shooting Heroes, Chungking Express, Ashes Of Time Redux, Happy Together, In The Mood For Love and more. Brand new 4K restorations of the Bruce Lee classics The Big Boss, Fist Of Fury, The Way Of The Dragon and Game Of Death will also debut.

Perhaps most exciting of all, the festival will also be screening Hachimiri Madness - Japanese Indies From The Punk Years - a special programme HKIFF curated together with the Berlin Film Festival and Japan's PIA Film Festival, and features early offerings from the likes of Sono Sion, Ishii Sogo, Tsukamoto Shinya and others.

But this is just a smattering of what will be on show during the two week event. As usual, ScreenAnarchy will be in attendance and providing coverage of the festival as it unfolds. Tickets go on sale Saturday, 26 February via URBTIX.