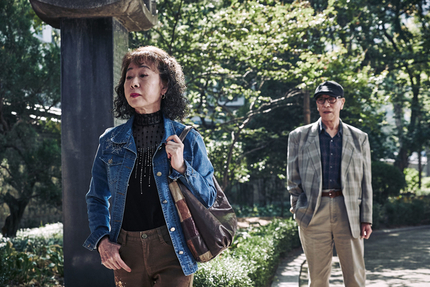 Veteran actress Youn Yuh-jung, star of such classics as Kim Ki-young's Woman on Fire (1971) and The Insect Woman (1972), takes on perhaps her boldest role yet in The Bacchus Lady. Directed by E J-yong, appearing in the Berlinale program for the fifth time, this surprising 3D drama was made within the sanctuary of the Korean Academy of Film Arts (KAFA).

Just one among the 50% of elderly Korean citizens living below the poverty line, So-young spends her days in a park in Central Seoul, approaching old men with a bottle of 'Bacchus', a popular health drink, and an invitation to some private time in a motel room. One day, when visiting a doctor to get checked for a venereal disease, she meets a young Korean-Filipino boy who she takes into her charge when his mother is locked in jail. Later, she meets a former John now on his deathbed and hesitantly fulfils his request to put him out of his misery. Soon, other elderly men come to her, seeking assistance for euthanasia.

While that brief synopsis already covers a number of sensitive issues, it doesn't encompass the whole scope of The Bacchus Lady's taboo subjects, which also include So-young's past as the girlfriend of a black American soldier and mother to biracial son she gave up for adoption, and the transexual owner of the home where she resides.

Though many of these topics have been addressed in prior Korean indie cinema, such as Kim Ki-duk's Address Unknown (2001), E's film is unique both for the sheer quantity of minority themes it explores as well as its relative lack of moral despair. The Bacchus Lady shows people in difficult circumstances on the fringes of society but it also presents characters that tackle their tribulations in a day-to-day, almost prosaic manner, and who also find happiness in casual exchanges or shared meals with friends.

Given some of the compromising situations So-young finds herself in, it's a surprising role for Youn and also a brilliant showcase for the revered actress' boundless talent. Strong and vulnerable in equal measure, Youn's So-young effortlessly courts our empathy yet she never baits us to pity her.

No Korean director is as hard to pin down as E J-yong whose every work differs vastly from his last (save for his pair of entertainment mockumentaries, The Actresses and Behind the Camera). With The Bacchus Lady he pulls his focus away from mise-en-scene, which is efficient but feels deliberately toned down, to explore new ideas. Perhaps unavoidably, if The Bacchus Lady comes up short at all it's because it doesn't delve very deeply into its manifold themes. E is content merely to present a variety of fringe issues facing modern Korean society and to give Youn the opportunity to shine in the middle of it all.

Do you feel this content is inappropriate or infringes upon your rights? Click here to report it, or see our DMCA policy.
e j-yongelderly prostitutethe bacchus ladyyoun yuh-jung윤여정이재용죽여주는 여자

More about The Bacchus Lady