Review: PARTISAN, A Chilling Take On Coming Of Age 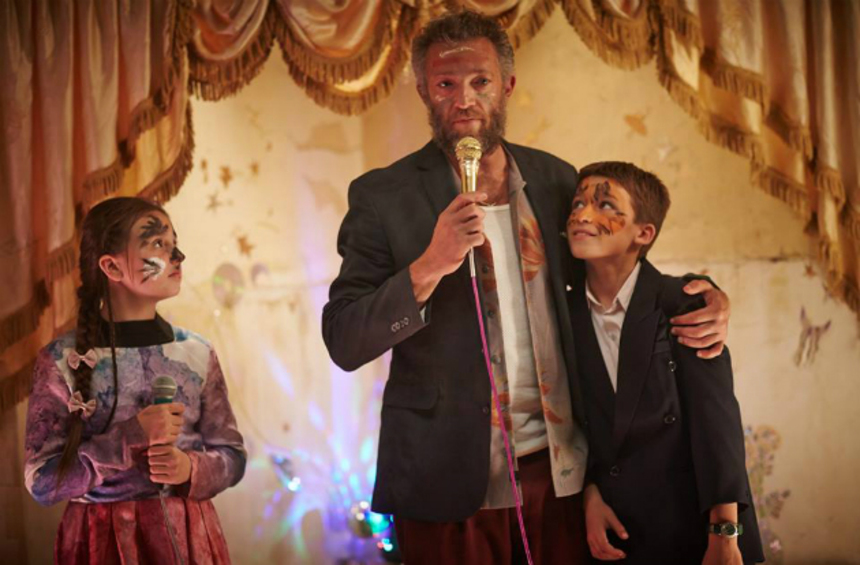 Under the diligent guidance of institutions like Screen Australia, Australia seems to have become a very promising country for new emerging directors, and Ariel Kleiman is no exception.

Within seconds of his uncompromising first feature's opening, it soon becomes apparent that he is a director who refuses to simply create films that can be passively consumed without any active engagement. Instead he seems to try to drive the act of interpretation onto the viewer, leaving us to puzzle out the film's series of sinister mysteries for ourselves.

You can see this gauntlet being thrown down early on, too, when Partisan starts by following in the footsteps of a mysterious woman and child. The pair are framed at an unnatural distance from behind, and we trail them from a height which also seems odd. Then almost just as suddenly, our view curiously swerves off in a different direction, as we abruptly fall into the magnetic, sturdy shadow of Vincent Cassel. All of this happens quickly and with little explanation of who, what, where or why, giving you an early indication of whether this will be your kind of film or not. But it is definitely worth sticking with, because things soon get interesting.

As a terse, physical figure named Gregori, Cassel lugs heavy scraps of timber to an isolated lair where he seems to be stockpiling everything that might be useful to a life in a seemingly post-apocalyptical world. Indeed, that is how Partisan is being billed: as an apocalyptic story set in a secluded commune in rural Georgia. But that certainly isn't necessarily the impression you get at first. At a first glance, it can almost seem as if this strapping hoarder of bric-à-brac is simply an abject hobo, living by his means in a giant abandoned complex at the harsh fringes of human society. And it is only after this first impression has been established that the true nature of Kleiman's ambiguous world slowly clarifies. It surfaces that Gregori is actually the head of a very large, complex family -- a clan he seems to be systematically building out of life's marginalised individuals. In fact, the title Partisan does at times feel as if it might almost be interchangeable with the word "patriarch," as that is very much what Cassel seems to represent in Kleiman's brutal, dystopian world. Something of a monolithic figure of self-will and assurance (a little reminiscent of the glorious personas Cassel has forged in many of his previous films), Gregori seems forcefully destined to unite and bond an entire community of mothers and children, and like a well-oiled polygamous machine this odd family seems to carve its own path in life.

This means the many meanings of "patriarch" and "partisan" all seem to tangle, merge and rearrange themselves throughout the course of this incisive film, and we see this messy family actually turn out to be a something of a para-militaristic group. Committed to an obscure cause, this band of mothers, brothers and sisters all seem to find solace together, and they wage war on their hostile world like a secluded sect of mercenary rebels. But it's not long before the film's second protagonist, an eleven-year-old killer named Alexander, questions what they're doing.

Through this cherubim character, Kleiman explores the devotion and trust which a partisan must place in his dedicated cause, and this is a delicate trust. One which must perhaps always be offered with a child-like naivety, and through Alexander's eyes we see their interesting, politicised isolationism soon become a fraught process of cruel indoctrination. However, this transition makes for incredibly compelling, troubling viewing. Deprived of any other perspective than the one Gregori has given him, and brought up in an efficient school of hard-knocks, Alexander and his step-siblings are all slowly groomed into slick, dynamic killers, and as a concept, this is certainly captivating.

The performance Jeremy Chabriel puts in as an 11-year-old hitman also never stops feeling calm, collected and deliciously wrong either. It is just perhaps a pity there isn't more dynamic assassination scenes, as some of the other parts of this first feature don't quite live up to their charismatic visual storytelling. Nevertheless, the inevitable clashes which arise between the betrayed, wide-eyed son and the deceitful, surrogate father always get the film back on track, and the tussling that begins between these two child-adults makes for a wonderfully powerful war of wills.

Also a real triumph in this film is the Georgian landscapes, which Kleiman takes up as the setting for his turbulent dystopia. Filled with dusty, dilapidated Soviet high-rises and crumbling concrete streets, this little town of abandoned hopes really is the perfect epicentre for the film, and it's definitely a location you'd hope to see more of. Somehow, these vistas seem to blend the spirit of an American ghost town with the unsettling wastelands of Mad Max, and it really heightens the film's sense of being set anywhere, but also nowhere, given the oddly dissonant collection of accents and physiques that are present in the cast.

Equally effective is the film's throbbing, synth soundtrack, which seems stubbornly stuck somewhere in Gregori's dated past. This lively music ebbs and flows, peaking nicely in time with the intense family tensions we see unfold. And Partisan has some other nice technical touches too, which see it almost come to resemble Snowtown.

Certain scenes bear some of that film's forlorn, oppressive slow-motion, for example, so whilst Partisan may not have been the most compelling debut to have graced Sundance and the London Film Festival in 2015, Germain McMicking's cinematography is certainly beautiful and Kleiman's chilling take on the coming-of-age narrative definitely represents another exciting new voice emerging from Australia.