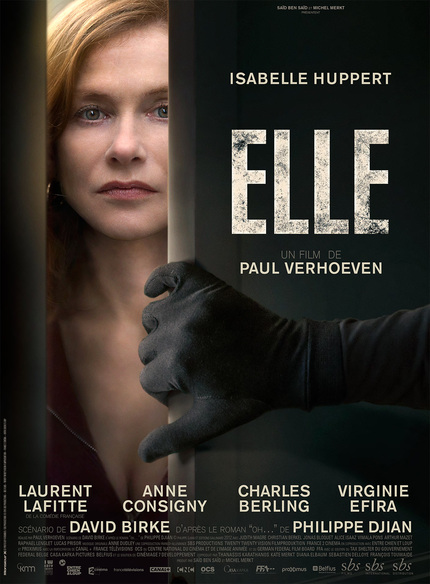 Paul Verhoeven's films can usually be divided into one of two camps: heavy-masculine sci-fi action (Total Recall, Starship Troopers), or heavy-feminine psychosexual thriller (Basic Instinct, Showgirls). He has returned after nearly a decade's absence, and his new film, Elle (based on the novel by Philippe Djian, who also wrote Betty Blue), clearly seems to fit into the latter category. In a bit of a departure, the film is in french, and stars Isabelle Huppert, one of the great ladies of french cinema. The first trailer (in french without subtitles) has landed.

Huppert plays Michele, the wealthy owner of a video game company, who is brutally raped in her home by a stranger. After the event, she first becomes paranoid, then starts to seek out her rapist to exact revenge.

While I don't love all his films, Verhoeven has such a distinct style and attitude that it's hard not to enjoy them, (I admit to a perverse love for both Starship Troopers and Showgirls in spite of myself) and he certainly has a cult following, probably eagerly awaiting this next installment. The film is due for release in France in late September, so perhaps there will be some festival appearances in the coming months. Watch the trailer below.