Destroy All Monsters: THE X FILES Was Never About Aliens 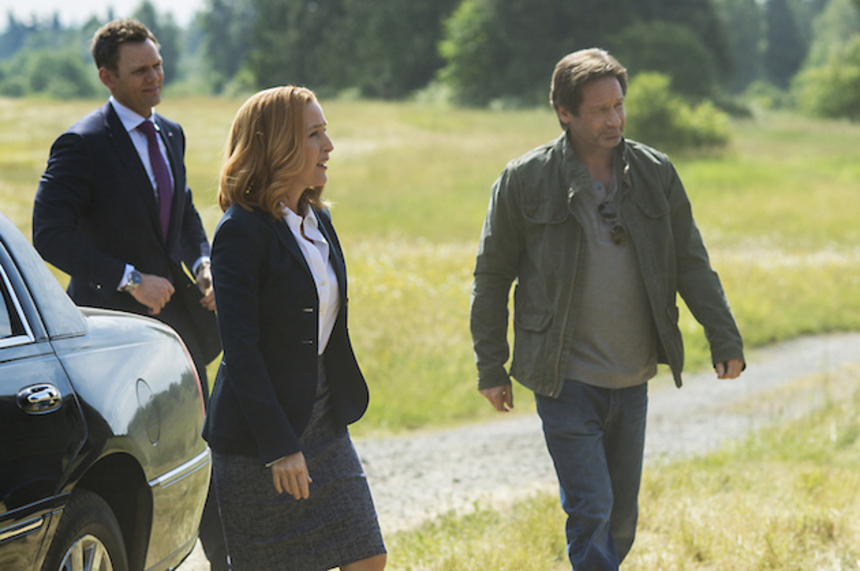 The tenth-season premiere of The X Files (wheee!!) opens with a rather spectacular reenactment of the famed UFO crash in a valley in New Mexico in 1947, the alien disc skittering out of control like an affluenza teen's Porsche on a snow-dusted highway. Aside from setting up the plot of the episode proper, the sequence also serves as a rather gleeful revision of scale.

Even at its most popular - and it's important to remember that at its height, The X Files was watched by more people than you can nowadays gather to commonly watch anything - the erstwhile Fox paranoia series could never have conjured up anything as massive as a broad-daylight, photo-real flying saucer ceasing to be flying.

It was forced to skirt around the edges of plain, seeing-is-believing realism - which, of course, became part of the series' rubric, even adopting questions of photo-realism and media manipulation into its ever-expanding tapestry of all the ways that the shadowy government/alien conspiracy was, to put it bluntly, "fucking with you."

Ah. On the subject of that conspiracy, "My Struggle" serves as a revision of scale in another way.

As gleefully as a kid smashing his LEGO set to build something else, Chris Carter uses the season premiere to casually inform us that the entire series mythology up to this point, wherein aliens and humans were working together to colonize the planet Earth at the expense of the human race, was a doped up con job used to cover up a shadowy government cabal's true objective: ruling the world, like a good old-fashioned Bond villain.

In a dizzying sequence narrated at breakneck speed by Community's Joel McHale - which should indicate exactly how seriously Carter takes it - every single fucked-up thing that's happened in America since 9/11, up to and including the climate crisis for crying out loud, is tied together in a multi-layered web of constraints whereby a fattened and docile human race, more inclined to walk down the streets staring into their smartphones than up at the stars, will be yoked and enslaved by a militarily superior group of super-evil humans.

This, friends, is The X Files.

I gather some people didn't like the premiere. I loved it. It seemed perfectly on-model, to me, to the original television show at its most grandly crowd-pleasing. (One hopes, nonetheless, that some of the other episodes in this painfully short quarter-season will delve into the less mainstream, more "Bad Blood" corners of The X Files' seemingly boundless narrative and stylistic potential.)

But then, for me, the specifics of the series enormously convoluted mythology - which, frankly, who could keep track of all of that anyway? - were always less important than the basic thematic idea behind Mulder, Scully, and the X Files in the first place: shit's fucked up, people are lying to you, and (per the Ghostbusters), who ya gonna call?

Like many people, I've been calling for Mulder and Scully's return from nearly the moment the original show went off the air. Oh, certainly, the creative and narrative ballast had been entirely depleted by the tail end of The X Files' ninth season, and even the foregrounding of Gillian Anderson's Scully in the latter years wasn't enough to make up for the fact that the writers had, in 202 episodes, completely expended the available institutional paranoia of a hundred years of unexplained abductions, Christian cultists, and inbred hicks.

But The X Files went off the air at an uncommonly fertile tipping point in the mythos of the American nation. Certainly, a show about governmental conspiracy seemed in somewhat poor taste in the year immediately following 9/11; but no sooner had The X Files breathed its last than the machinery of government autocracy at its most nakedly anti-constitutional went into an overdrive that would make the Watergate era - whose whiff of mistrust basically fueled the series for all of its nine seasons, twenty years after the fact - seem like a misunderstanding over who was picking up the bill at a restaurant.

It's not lost on me that the driving idea behind The X Files - again, shit's fucked up, people are lying to you, and who ya gonna call? - is essentially identical to the sense of institutional malaise that is, say, directly propelling neo-Hitler charlatans like Donald Trump into power over an angrily disenfranchised sector of society who may not even be sure exactly what they think is wrong, only that something certainly is (and it's probably someone else's fault). But the core idea remains a strong one across the whole breadth of the political spectrum, precisely because - for whatever reason - as we (as individuals, and as a civilization) get older, we can't seem to escape our growing disquiet that things ain't right, and that they used to be better.

This is the tension that created the modern age. We are impressionable little creatures, easily shocked, no matter how tough or desensitized we think we've become. A micro-second ago (in cosmic terms), we were still huddling in caves, telling each other with ABSOLUTE CERTAINTY (a CERTAINTY which would be mightily familiar to those of us who use Twitter, I suspect) that those forks of blinding light in the sky were, for sure, caused by a super-powerful god-thing with a hammer and not, say, the accumulated static discharge of clouds rubbing against one another.

We did this because the god with the hammer could be anthropomorphized and understood as a creature like us, and was therefore a being who could be reasoned with, and not the whim of random, capricious chance. Capricious chance - or call it chaos, to invoke the thunder god's rather villainous kid brother - is, to put it mildly, simply too freaky for the fragile human intellect to deal with on any kind of a regular basis. (Even the invocation of the thunder god's villainous kid brother is - you guessed it - an effort to create an understandable, controllable being out of the very chaos he is meant to embody.)

Staring into the face of unadulterated, unexplainable chaos is, as it turns out, pretty bad for the human psyche. We're told in "My Struggle" that Scully has diagnosed Mulder with clinical depression, and given the visibly manic reaction we see in Mulder when Joel McHale pulls the wool back on the potential new conspiracy, things might be even worse than that for the former agent.

This is, for lack of a better phrase, the new normal. Even if Mulder is an extreme case, the anxiety and depression he exhibits when confronted with his own powerlessness against the unexplained workings of not just the cosmos, but his own society, is the underlying fabric of life in North America in 2016.

Now, your mileage may vary on "My Struggle" and its broad-brush reassignment of conspiratorial narrative upon fifteen years of institutional malfeasance in the 21st century. But when I say that we needed The X Files back, this is pretty much exactly what I meant.

Not to explain what's going on out there - because Carter's conspiracy theory is absolute bullshit - but to tamp off some of the anxieties and tensions that rule our pop-cultural roost, in a safe, controllable way that articulates the problem with a positivist bent, rather than a narrative of hopelessness.

There is no conspiracy behind it all, of course; our search for meaning is, intentionally or not, the "My Struggle" of the title, and just as futile.

But in a universe that does not, I assure you, give a single fuck, our search for meaning and the creation of same is pretty much the only thing that's going to get us to the end of any given day. And if you think your own quality of life matters at all (and you are hereby excused if you do not), then that's the whole ballgame, and why we created our myths in the first place.

The serialized episodes of The X Files that dealt with the conspiracy were commonly called the "mythology" episodes, and the concept stuck, without our ever delving deeper on the meaning of the word. This meandering world needs mythology, desperately. Thank goodness Agents Mulder and Scully are back in that basement office, for a little while anyway, to give us some.

Do you feel this content is inappropriate or infringes upon your rights? Click here to report it, or see our DMCA policy.
Chris CarterDavid DuchovnyGillian AndersonThe X-Files