Vincent Price on Blu-ray: THE OBLONG BOX And HOUSE OF THE LONG SHADOWS From Kino Classics

J Hurtado
Editor, U.S. ; Dallas, Texas (@HatefulJosh)
Tweet Post Submit
Vincent Price is among my very favorite actors. His incredible charm on screen, even in the most hideous of performances, is undeniable and rarely lets me down. This time around I'm taking a brief look at two of the more recent Vincent Price films to hit Blu-ray, courtesy of Kino Lorber Studio Classics, AIP's The Oblong Box and The Cannon Group's House of the Long Shadows.

There was a time near the introduction of Blu-ray as a format that it was difficult to find Vincent Price films on Blu-ray. For a couple of years all that existed in high definition was Edward Scissorhands, one of Tim Burton's best films, but hardly a Vincent Price film, though his mark on it is unmistakable. However, over the last three years, it appears as though you can't swing a dead cat without hitting two or three new Blu-ray releases featuring the king of the genre. Most of Vincent Price's major features have already been released, but some of the lesser known AIP films and some others are just now making the leap from DVD, and in some cases only MOD (manufactured-on-demand) DVD, to Blu-ray.Let's take a look at some of the latest.

House of the Long Shadows 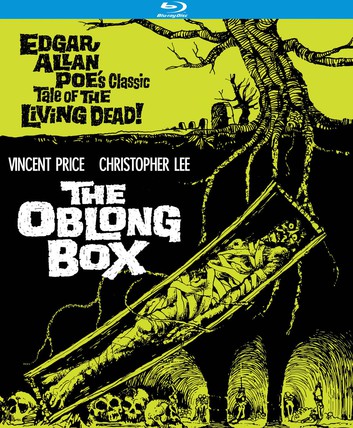 The Oblong Box is a late cycle Poe adaptation starring Vincent Price and Christopher Lee, however, it is really Alistair Williamson as Sir Edward Markham who does most of the heavy lifting. The film is (quite) loosely based on the Poe short story of the same name, however, it doesn't stick slavishly to the text and therefore allows the material to settle better with modern audiences in 1969.

The film starts when Sir Edward is abducted and mutilated while in Africa following some typically anglo misdeeds among the locals. When he returns to his brother Julian (Price) in England, his appearance and demeanor have become so grotesque that Julian decides it would be best to keep Edward locked away from prying eyes. Edward naturally disapproves and uses some medical trickery to escape from Julian, all the while indulging his newly developed sadistic urges.

When Edward comes across a mad doctor using robbed corpses for his experiments in the guise of Dr. Neuhartt (Christopher Lee), Edward finds just the right man to help him keep his true identity silent while exacting his revenge upon his brother Julian for attempting to kill him. What follows is a nasty tour through late 19th century London and yet another story of graverobbing and murder under Victorian skies.

While the film isn't great, and is certainly nowhere near the overall quality of Vincent Price's Corman-helmed Poe adaptations, The Oblong Box does have its charms. It is sufficiently gruesome to hold modern attentions, however, it does appear to spread 30 minutes worth of story out over a 96 minute run-time. The Oblong Box is certainly a lesser Poe adaptation, but Price and Lee manage to wring every bit of value from their relatively limited screen time. It's difficult to recommend whole-heartedly to anyone apart from Price completists, but as a member of that group, I'd give it a moderate recommendation

KL Studio Classics has done a satisfactory, though not superlative job with the Blu-ray disc of The Oblong Box. The image quality is solid, though not exemplary, with satisfying levels of detail, both in bright and low lit situations, as well as a relatively low amount of print damage mostly in the expected places like credits and transitions. The audio, a DTS-HD 2.0 Mono track, is similarly satisfactory. No fancy gymnastics on this track, but the dialogue and background tracks are clean and clear, so I'll take it.

The Oblong Box on Blu-ray only has two major extras. The first is an insightful audio commentary from film historian Steve Habermann. The track is quite academic, which is great for the academics out there, however, it does often feel like a chore with facts being narrated very dryly. Some people will love it, I prefer a little bit of spice. The second major extra is a 1969 short titled Annabel Lee, which is essentially a reading of Poe's classic poem by Vincent Price with some footage that looks like well-selected stock images to accompany the audio. Not bad, but not great, though I'm glad I have it.

The Oblong Box on Blu-ray by KL Studio Classics is perhaps a better release than the film deserves, but here it is. If you're a Vincent Price fanatic like I am, this is indispensable, in spite of the mediocre nature of the film. Recommended, with reservation. 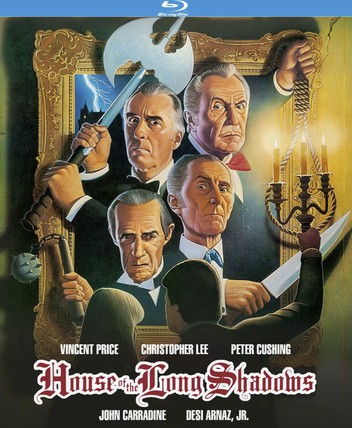 The second Vincent Price feature is more of an All-Star game of '60s horror, 1983's House of the Long Shadows. This film features not only Price, but also Christopher Lee again, along with John Carradine, Peter Cushing, and Sheila Keith. The film was an attempt at a horror blockbuster from the legendary Cannon Group and not only starred the above mentioned amazing actors, it is directed by famous English sleaze merchant Pete Walker. With all of those performers at the table, it's hard to imagine how the film could misfire, but it does, not because of those actors, but because of the actual lead, Desi Arnaz, Jr.

This is essentially a haunted house story, though there are no disembodied voices or fluttering ghosts here. A young novelist named Kenneth Magee is challenged by his frustrated literary editor to complete a horror story in 24 hours as an attempt to raise Magee's ire and get him moving. Magee accepts the challenge and Magee provides him with an abandoned British estate in which he can work in peace. However, very soon it becomes clear that Magee is not alone, and shortly thereafter, not welcome.

Probably the film's greatest claim to fame is in its cast, which is quite notable as mentioned above. However, by 1983, all of the gentlemen were well past their prime, so it's less impressive than it sounds. The story unravels as Arnaz encounters each of the elder statesmen at different times with each seeming to hide a secret nastier than the last, but no one giving up the ghost. It all clumsily tumbles toward a mostly telegraphed conclusion with the help of a few nasty deaths and comical coincidences.

It doesn't sound terribly appealing, however, the elder performers more than hold up their ends of the bargain and save this from the bargain bin, but only just. Vincent Price, Peter Cushing, and Christopher Lee are doing most of the heavy lifting, with each using the sheer power of charisma to keep the gears moving. Sheila Keith and John Carradine are both a bit less successful in their turns. By this point in his career Carradine had all but given up on the kinds of substantial roles given to his contemporaries, instead veering toward sleazeville in films like Vampire Hookers. Keith wasn't a name performer like the others, but rather a regular of the director, Pete Walker, who used her to much greater effect in Frightmare and House of Whipchord.

As choppy as the film is, it's still a lot of fun, even if it feels like a Hammer film crossed with something inimitably '80s like Legal Eagles or Moonlighting. It's a shame that it's one of the only films to feature all of these performers on the same screen, although each has more than enough talent and charisma to make a film work on its own.

House of the Long Shadows is over a decade younger than The Oblong Box, and that difference shows. The image is quite stable and clear and colors feel quite true. I have no issues with this film's appearance, it's a fairly workmanlike film, however, so don't go in expecting fireworks and you'll be fine. The audio is similarly satisfying, though again, nothing to write home about.

Kino Lorber Studio Classics has included a wonderful interview with Pete Walker, who always appears ready for a chat, who details the idea behind the film, and its genesis. It really all boils down to the fact that The Cannon Group wanted their fingers in every pie, and getting these performers all on the same screen was more of a PR coup than a concept. We also get commentaries from Walker (wonderful) and Kino's go-to for horror films of a certain age, David Del Valle, we are sadly missing David DeCoteau this time around, but Del Valle manages handsomely on his own. He's a very erudite, if a bit gossipy, man who knows whereof he speaks and his stories always do a fine job filling the time. Recommended.

Do you feel this content is inappropriate or infringes upon your rights? Click here to report it, or see our DMCA policy.
Christopher LeeKino LorberVincent Price

More about Vincent Price on Blu-ray