EVERYBODY WANTS SOME Trailer: Richard Linklater Takes You To College 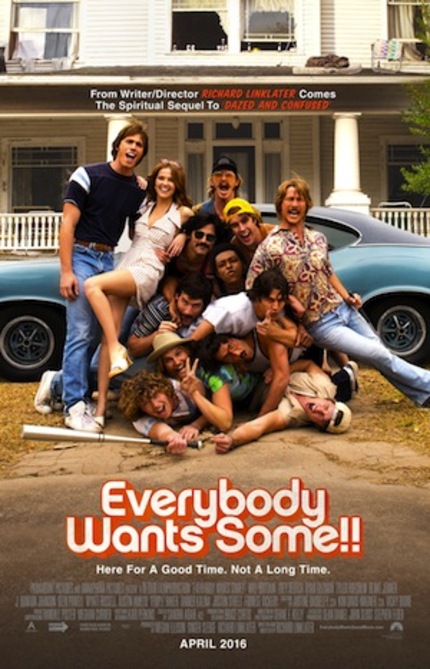 Everybody Wants Some, from Richard Linklater, is the 'spiritual sequel' to his 1993 cult classic Dazed And Confused. Where the earlier film was about high schoolers in the mid 1970s on the last day of class, this new one takes place in the early 1980s and is about college freshman. The Boyhood director has been talking about doing this one for a number of years, so it actually kinda feels odd to see that the film is almost here (it'll premiere at SXSW in March before opening in general release in April).

The thing is, Linklater fan that I am, the just released trailer makes me less than enthused for the film.

For one thing, it is interesting to note that Linklater is a director who has explored most periods of modern American life, but has been skirting around, perhaps even actively avoiding, portraying college in his films for his entire career now. Boyhood ends right at the beginning of Mason's freshman year. In Before Sunrise, Jesse has been done with school for a bit, while Celine is on break and in her final year. For the incoming seniors of Robert E. Lee High in Dazed And Confused, college still feels a long way off.

In some ways Linklater not doing a college movie is understandable. College set films are a dime a dozen, so maybe Linklater just hadn't figured out a worthwhile story to tell until recently. Anyone who reads a bit more about the guy, or listens to a commentary track for one of his films, will know that the college age period was crucial to his development as a filmmaker, if not really in a straightforward "I got a degree" way. Linklater is a student of life as it were, so it's kinda weird to see this very generic looking college set movie. At least, that's what the vibe of the trailer is giving off. So, yeah maybe it's just the bland marketing that's doing me in, and we'll in fact be in for a real treat come April. But as it stands now Everybody Wants Some looks more like one of those Dazed and Confused wannabes that festered throughout the 90s and 00s. Maybe using the words 'spiritual sequel' is just a more meditative way of saying 'remix'.

Now that my rambling is over, what's your take? Chime in below with a comment.

Do you feel this content is inappropriate or infringes upon your rights? Click here to report it, or see our DMCA policy.
everybody wants somerichard linklater