Review: ENTERTAINMENT Embraces An Absurdity And Melancholy That Is Extraordinary To Behold 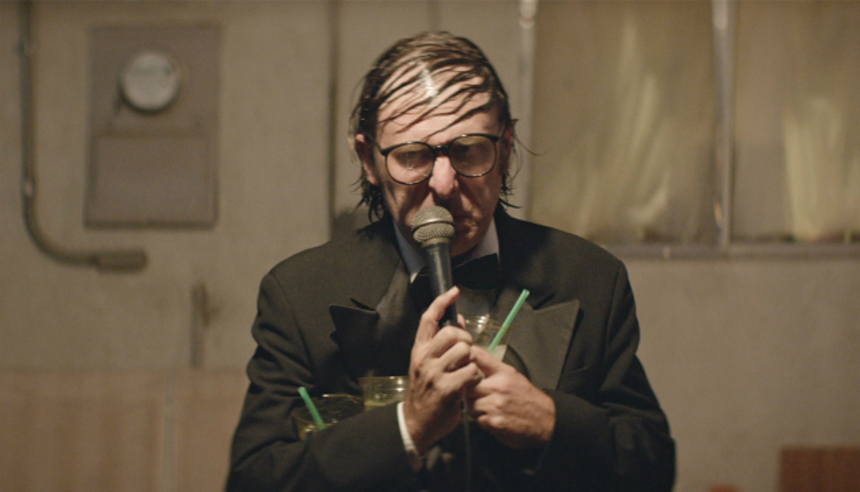 Many would say there are two distinct poles to cinema-going. There are those times when you want something warm and familiar. It's comfort food you can share with your family. Not too sweet or sour, not too heavy. And then there are the times when you need to be whisked away to far away lands, psychedelic, melancholic, byzantine.

Rick Alverson's follow-up to the 2012 The Comedy doesn't just squarely land under the second definition, it does all it can to tear it apart. Such attempts may feel foolhardy, but Alverson is game and what arises is an expert expansion of his solely strange American Mythology of misfits and emotional marauders. Alverson doesn't just land on the map with Entertainment, he asks why we even need it in the first place, then promptly burns it.

Entertainment is a SoCal desert odyssey, existential and hysterical in turn, following Neil, a stand-up comic played by Gregg Turkington, best known for the web series On Cinema At The Cinema, and also as his stand-up persona Neil Hamburger, which the film's Neil is based off of.

Neil travels from Podunk desert town to even shittier dry-beds, doing his odd-ball standup for unappreciative bar crowds, Tye Sheridan's dancing clown in tow as his opening act. Neil's own act is full of hyper-realized, nervous tick infused jokes about E.T., Carrot Top, Elton John and Princess Diana. Extended, self-conscious knock-knock jokes packed with raunch, Neil squaks and coughs his way through the act like Burgess Meredith's Penguin from the old Batman show, his hair plastered to his head by gel, always juggling three drinks and the mic in his hands. To say he puts people in an uncomfortable place is an understatement. And that's before he talks back to any rude audience members about them being whores who slip on the cum that is falling out of their own assholes.

Between shows the real Neil, solemn and introverted, takes tours of local sights: the airplane graveyard, the oil field, the ghost town, often wandering off on his own path a few minutes into the tour. He leaves late night messages for his daughter, and constantly sips on a glass of water with lemon or lime, or the occasional harder drink. At one show his cousin John (John C. Reilly), a successful rancher, shows up, which prompts a visit to his orange grove and cattle ranch where John proceeds to give business advice to the struggling comedian. In one highway bathroom Neil encounters a pregnant woman in labor, in another he finds a lonely young man that just needs to stay warm.

Neil's act is never taken seriously, though he says he has an upcoming gig in the Hollywood Hills at some hotshot's party. Meanwhile he befriends a beautiful chromotherapist -- a color/aura/shakra expert at one of the many motels he stays at. He often dreams of himself in a white, rind-stone suit and cowboy hat, standing inside an old west style jail cell. Days dance into nights and he moves on, bleary eyed and careful with who he talks to.

When it premiered on the festival circuit, Alverson's third feature The Comedy turned a lot of heads for its irreverent and aggressive deadpan, its portrayal of an affluent asshole, and the seemingly determined will to just make everyone uncomfortable, and make no judgments either towards his characters or his audience. The film portrayed some ugly and sad people, clueless and mean-spirited. Entertainment steps further into that deadpan, embracing an absurdity and melancholy that is extraordinary to behold in its bizarre humanity.

Lorenzo Hagerman's cinematography of the California desert is astonishing to be enveloped in. An alien landscape full of off-color curiosities and dull-eyed atrocities, the world of Entertainment culls from the catalogs of Buñuel and Burroughs with sure-footed aplomb, while creating something wholly its own. This is all backed by Robert Donne's mystical score, which adds a mesmerizing layer to this wholly post-modern holy quest.

Turkington embodies the persona of comedian in all its shades: the passive-aggressive, the sad-sack, the hater, the curiously alluring man, the destructor and creator. Our comedian acts as the Shaman Of Tragedy, traveling far to deliver happiness through his jokes, but in the end unloading his own hatred for the world and himself on his audiences. He is a man on the path to seek the elusive laugh... the legendary laugh; that one laugh which may heal him of this pain he caries. That holy moment is the moment when he can laugh at himself.

Alverson's film is certainly not going to be an easy sell, but its off-beat humor and existentialist bent will appeal to a vast underground audience seeking that weird next cult classic. On the other hand that actually sounds dismissive of Alverson's extraordinary talents. I originally saw the film at this year's Sundance, and if there was one thing clear coming out of that indie hub, it is that Alverson and Tangerine director Sean Baker are two of America's most vital filmmakers working right now. They are on opposite ends of subject and approach, yes, but like Baker, Alverson is making consistently challenging and equally entertaining fare.

If cinema is the stomping grounds for the American myth, then Alverson sends us to a sun-soaked limbo land full of monsters which pry their way inside us with their sad and horrible hands, slowly becoming our new best friends. It is only then that we realize these monsters and weirdos are more human than we'd often admit ourselves to be.

Review originally published during the Sundance Film Festival in January 2015. The film opens in select theaters in the U.S. via Magnolia Pictures on Friday, November 13.