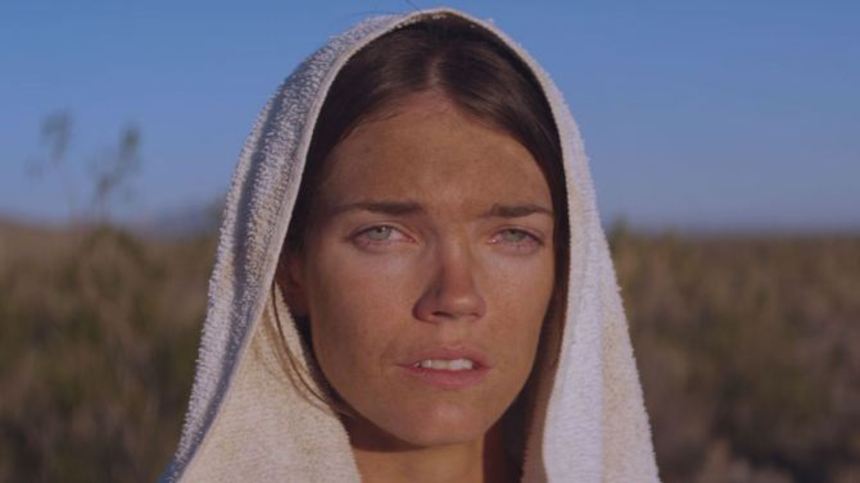 Celia Rowlson-Hall studied choreography and dance, but has turned her considerable talents in those areas to film and video, and her first feature-length film Ma is a experimental wonder, a strange retelling of the Virgin Mary, which becomes a pilgrimage and examination of the female body in the landscape. With almost no dialogue but a haunting score by Brian McOmber, Ma is a rare kind of film that asks its audience to think outside of both the origins of myth, and how those myths can be interpreted and translated for contemporary times.

A woman (Rowlson-Hall) clothed in a t-shirt, cowboy boots and a white towel draped around her head, makes her way across the American southwest desert. She meets Daniel (Andrew Pastides), a drifter, who helps her on her journey. They engage with both each other and others, everyone moving to a discordant rhythm as Ma finds her way to her pregnancy and child, working her way in a world that would cast her in a role against which she initially endures, but against which she ultimately rebels.

While the film begins with a quote from the Bible, and the film is billed as a retelling of the Virgin Mary's story, it would be a mistake to take that too literally. Ma might be partly the Virgin Mary, but she is also Mary Magdalene (as is set up during an interesting group sex/rape scene), and a new twist on the hero, or really the heroine. Daniel might be seen as Joseph, but he has his own past and his own journey, which is only relevant in relation to Ma's. Other characters appearing in the space (including Amy Seimetz as a motel clerk), who both fits stereo/archetypes of authority, danger, power, sex, religion etc., as pieces in a puzzle around Ma that she must decipher.

There is a certain linearity to the narrative, but it is best to eschew any strong comprehension of traditional storytelling, which is to the film's benefit. This is a film understood through Ma, and Rowlson-Hall's movement and reactions in the landscape. As she tries to discover herself, she works through how she might fit into the space around her - in one scene, she reacts to different programs on television, taking the cue of the reaction she is expected to provide. In another, she and Daniel take turns at childhood games, as though a reversion to childhood might provide the answers that Ma seeks.

While Ma is usually nearly naked, there is no male gaze upon her body. This is Ma's exploration not only of her connection to the landscape and people that surround her, but her connection to her own body, and how that connection would change if/when she has a child. As such, she finds kinship among those like Daniel who move without a home (except their bodies), or Las Vegas showgirls, whose living is made from their bodies. Indeed, while there are male and female characters, Ma's exploration in part is her own androgeny and attempting at fusing the masculine and feminine (if indeed there is even a divide or that divide is simply a cultural imposition).

This is all matched by Rowlson-Halls' ability to place the camera in coordination with the movements, more often than not only a section of Ma's body to focus the spectator, and the lack of dialogue. This requires a soundscape as well as a score, and nearly all the movements are accompanied by some sort of sound. That may seem overwhelming, but the sound department has done an exceptional job; some sounds are quite, some cacophanous, some at odds with the visual image. And it is no accident that this is all placed in the landscape of the southwest, an area of the world with great tracks of desert and nothingness, places of nonesensical human intervention (such as Las Vegas), and places of spiritual renewal.

The landscape is garden of eden, pre-apocalyptic nightmare, and space enough for the misfits of the world to come together in love, sex, play, birth and rebirth. The windswept, bleached out colours give distintive shape to Rowlson-Hall's unique vision. Ma is an exceptional film, certainly not for everyone, but one that requires multiple viewings, and will reward the viewer for their embracing its strange world.

Do you feel this content is inappropriate or infringes upon your rights? Click here to report it, or see our DMCA policy.
Amy SeimetzBlack Nights 2015Celia Rowlson-HallMa