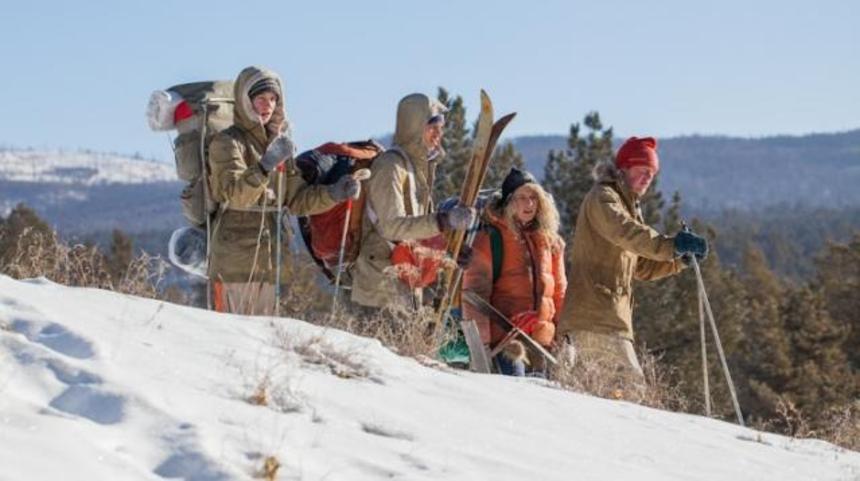 Growing up in Canada, you develop a healthy respect for the cold, when you could die just from being caught outside, not to mention activities that could have you buried under snow, or trapped in places with no civilization for days around. Urmas Eero Liiv's Ghost Mountaineer is based on a true event that happened to a group of Estonian hikers in the Siberian mountains during the Soviet era, and between the threat of freezing to death and the threat of death by Soviet bureaucracy, it's up there with other cold-weather horror films. While perhaps not as technically accomplished (and given this is the director's first 'fiction' feature, somewhat forgivable), it is damn frightening, all the more so for its reality.

Six friends, lead by Olle (Reimo Sagor), have traveled by train across the USSR to hike through teh Siberian mountaines in search of a semiprecious rock. While Olle and his fellow geologists are interested in the terrain, Eero (Priit Pius) just wants to have a good time, which includes telling the story of a lost mountaineer whose ghost haunts the region. After a rift between Eero and Olle over a girl, Olle goes ahead on his own and is lost. The rest find a remote Mongolian village with a bored Soviet bureaucrat, who accuses the group of stealing something sacred to the villagers.

The film's first half works as a treasure hunt/teenagers-in-the-wilderness story, with both the beauty and the terrible harshness of the environment upping the usual stakes in this kind of genre film. At first, the characters seem to be a bit stock, with serious ones and partying ones, but the actors are to be commended to adding layers far more quickly and in a more interesting way. They may be way out of their depth, but a few of them, especially Olle, are smart enough to know the potential danger, though being kids, their emotions get in the way sometimes.

As stated, this is only Liiv's second film, and this both adds and subtracts from its quality. Liiv keeps most of the shots clean and simple, doing exactly what needs to be done to tell the story. He judges well when there needs to a close-up to show emotion on a character's face, and when a panning shot of the landscape is important to convey the dire circumstances. Where it sometimes doesn't work is in the editing; I'm guessing that in order to heighten the fear, Liiv and his editor tried fast cuts between images, but they are somewhat unclean, and go by so quickly as to be confusing as oppose to frightening.

The story switches gears when the kids come to the village, and this works to the film's benefits; the stakes for their lives might be different, but it's a different kind of terror, not a lesser one. Now, they have shelter, but no means of communication with the outside world, their passports are confiscated, and the villagers (who throw coins at and pray to a statue of what looks like Lenin) believe the kids have brought a curse upon them. If anything, the village is weirder and more terrifying, as the kids could, in theory, fight back, but become trapped in a web of red tape, fear and resentment.

The film also suffers from being a little too long (again, perhaps a consequence of Liiv's lack of experience, it is common for first time filmmakers), as there is only so long this kind of fear and tension can be sustained. But overall, Liiv's adherence to telling this story almost exactly as it happens, with a few cinematic tricks thrown in, is the film's strength, unencumbered by the need to display any attempt at cleverness or pretensious flair.

Do you feel this content is inappropriate or infringes upon your rights? Click here to report it, or see our DMCA policy.
Black Nights 2015Ghost MountaineerUrmas Eero LiivLiis LassPriit PiusReimo SagorHanna MartinsonAdventureMysteryThriller