Black Nights 2015 Review: DON'T LOOK AT ME THAT WAY Asks Much, Answers Little 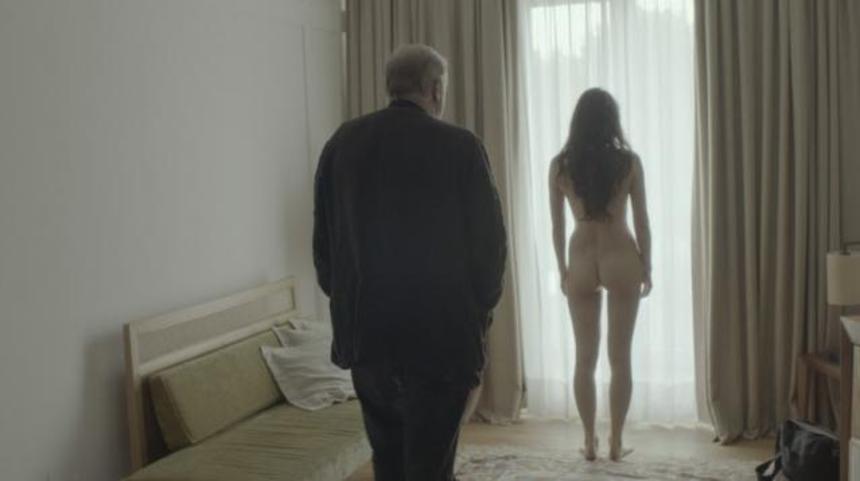 Most stories are about love: falling in love, falling out of love, betrayal, passion, death. And often, there is a good lover and a bad lover, or at least, someone with whom the audience is supposed to share perspective. But how much is one good and the other bad? Do we need to know why the bad one does what they do, or can their actions be enough?

These are questions I was asking myself, and not necessarily satisfied with answers (or lack thereof), in Don't Look At Me That Way. The first film by German-Mongolian filmmaker Uisenma Borchu, it is a story of an odd love triangle, and the even odder behaviour of its protagonist, one that ight have benefited from further explanation.

Iva (Catrina Stemmer) lives with her 5-year-old precocious daughter Sofia. Sofia befriends their neighbour Hedi (Borchu). Hedi slowly begins to infiltrate their lives, and she and Iva become lovers. When Iva's visiting father (Josef Bierbichler) fails to turn up for a planned dinner, Hedi goes in search of him, and what happens threatens to tear them all apart.

This main story is framed by short scenes in which Hedi has taken Sofia to Mongolia to visit Hedi's grandmother; this foreshadows some sort of commitment with Iva, custody battle death; it's not revealed until the end. These scenes frame Hedi as the other, the exotic, the outsider who nonetheless apparently takes on certain responsibilities. In the main story (presumably flashback), she is shown as a somewhat stereotypical young woman, interested in smoking, sex, drinking, and in bringing whomever she happens to fancy into this semi-hedonist lifestyle (her profession is never disclosed). Iva is no shrinking violet, and the fact that this is an affair between two women is not treated as strange or a 'coming out' for either of them, which is to the film's credit.

Indeed, even within the partial stereotypes of the characters (Iva as shy, Hedi as bold), this does feel like an affair many of us has had, the time we all fell for the bad girl or boy (or perhaps we were that bad girl or boy), who eventually becomes bored with us. In this film, however, the camera is mainly loyal to Hedi, which means the untypical perspective. This is a small arthouse film, so this means handheld camera, natural settings and lighting, lots of close-ups, and a minimalism to focus on the characters. In this perspective, the story is interesting enough and the characters engaging enough to keep the audience's attention.

However, once things begin to go wrong between Hedi and Iva, the seams start to unravel. Following Hedi as she pays more attention to Iva's father, her behaviour strange and often downright cruel, a sense of motivation or at least initial reason is unclear. We do not necessarily have to feel sympathy with Hedi (indeed, I'm glad that Borchu does not force this, it is too often deemed necessary for all female characters to be sympathetic). But in this type of drama, some reasoning is required, even if we don't always condone the actions.

Don't Look At Me That Way ends far more strangely than it begins, and the ending (due to lack of aforesaid explanation) is somewhat out of place in context. As a love drama, it has interesting characters and a story that is known but told is an odd but at least a first different way. More attention to detail and understanding of character would have benefited Borchu's work.

Do you feel this content is inappropriate or infringes upon your rights? Click here to report it, or see our DMCA policy.
Black Nights 2015Catrina StemmerDon't Look At Me That WayUisenma Borchu