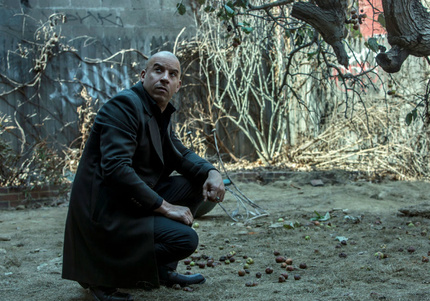 A good, fun ride for what it is, The Last Witch Hunter is the kind of movie that starts to fall apart as soon as the credits roll.

Perhaps the closest, easiest comparison is to Tommy Wirkola's Hansel & Gretel: Witch Hunters. Developing a similar idea -- good guys must kill witches because the world is in danger -- Wirkola's movie kept the emphasis on the action and featured a cheeky sense of humor, as well as the strong teaming of Jeremy Renner and Gemma Arterton. It had modest ambitions, all centered around delivering an entertaining adventure.

Based on an original screenplay by multiple authors, The Last Witch Hunter has greater ambitions, but multiple elements work against it. The script itself is serviceable and even periodically surprising, as much as anything because it's set up as a mystery: the immortal Witch Hunter, aka Kaulder (Vin Diesel) discovers that his longtime advisor, a priest known as Dolan the 36th (Michael Caine), has died on the heels of his retirement.

Kaulder recognizes almost instantly that Dolan was murdered by supernatural forces, which sets him on a path to discover the Ultimate Evil That Will Destroy the World, or something similar. To aid him on his journey to save pitiful mankind, he allows the newly-appointed Dolan the 37th (Elijah Wood) to work with him, and also ends up collaborating with bar owner / witch Chloe (Rose Leslie). Diesel, who has never met a solemn expression he hasn't embraced, is the linchpin of the story, which is a major obstacle to overcome. He's done nothing but Fast and Furious movies for the past half-dozen years, with an occasional side trip to the future (Riddick), and whatever he once knew about acting has been reduced to a red-carpet performance style. He looks good and moves well, but he needs to be surrounded by more action to serve as a distraction from his leaden mutterings.

Elijah Wood and Rose Leslie are both far better than the opportunities they are given here. Wood adds a lively presence as Diesel's sidekick, until he is whisked off-screen for far too long; Leslie is given nothing more to do than show up and, occasionally, emote effectively. I couldn't help but wish that one of them had switched roles with Diesel.

As it is, the insistence on Diesel being the star reduces everything to his level so as not to overshadow him. That includes the choice of Breck Eisner as director, who defined what it means to be an anonymous workman with Sahara (2005) and The Crazies (2010), the latter of which shows how much better a director such as Eisner looks when he has better material to work with.

The Last Witch Hunter is best appreciated as a short candle. It provides light as long as it burns, and nothing more than that.

The film opens in theaters wide across North America on Friday, October 23.