Review: THE ASSASSIN, An Unqualified Success, Or, A Studied Bit Of Installation Art 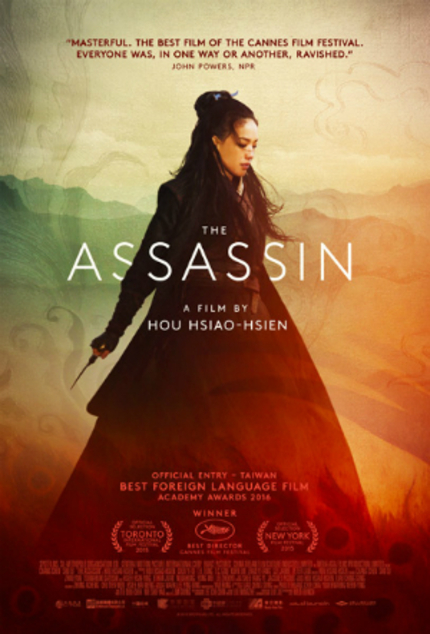 The first thing that strikes you in The Assassin is the quiet. Hou Hsiao-Hsien's ruminative tone-poem, about a Tang Dynasty sell-sword tasked with killing kin, is a remarkably hushed affair. Be it dialogue, sound-effects or music, at no point does the pitch of the film register beyond a whisper. All the better, I suppose, to lead you into a hypnotic lull. All the better, because anything else would detract from the film's true stars: color and light.
The Assassin has plot, but really only in the most technical sense of term. There is an action-and-consequence set of events. The characters remain the same from scene to scene, and move linearly forward through time. But what happens on screen and what the film is about are two wholly different beasts. What happens onscreen is nothing much at all. Characters in opulent dens hold endless conversations. Fights that are choreographed to an inch, but over practically before they begin. What the film is about is staring into a meadow and noticing varying hues of green. Or losing your shit while watching fog dance over a lake. What the film is about is reverie.
Hou's longtime muse Shu Qi stars as Nie Yinniang, a young noble kidnapped as a child and trained to be a killer. We first meet her and her kidnapper come den-mother, the religious zealot Jiaxing (Sheu Fang-Yi), in a black and white prologue. Sent to dispatch of a cruel local warlord, Nie Yinniang is somehow unable to go through with the task, though we don't know why. As punishment, or perhaps as a chance for redemption (or maybe something entirely else -- there's plenty left opaque here) Nie Yinniang is offered a new mission. She is to return to the home she was abducted from, integrate back into her family and kill the man she was once set to marry, the local Governor Tian Ji'an (fellow Hou veteran Chang Chen).
At this point, the Academy ratio frame fill become awash with color. And what colors they are! Positively every inch of square space is filled with the most ornate details. Tapestries and murals and painstakingly recreated 9th Century silk, all shot and lit with beatific reverence. The deep reds and sparkling golds don't so much pop off the screen as open up a corridor to invite us in. That being said, this is also where the narrative more or less drops out, giving way to natural beauty and ceremony.
Director Hou spent the better part of his nearly thirty year career planning for this film and then spent over five years actually making it. The result is a work that exudes deliberation and research. You studied every conceivable detail of court life in the late Tang Dynasty, and thoroughly weaves each one into the fabric of the film. If you think I'm being hyperbolic, dig this: Hou studied the bathing rituals the different characters would have, and just quietly had the actors incorporate that into the physical approaches without ever calling attention to it at any point in the film.
There's a great deal that's not called to attention. Narratively, that means pretty much everything. Hou's working an extreme iceberg principal here, showing and not telling, sure, but showing with the most comically understated minimalism that one gets the feeling a medium bodied wind could come and blow the whole wispy endeavour away. Much time and effort was spent creating this luminous window to the past, but like looking through most windows, what we see ends up being pretty mundane.
The fight scenes are a major case in point. Much was made about how the devoutly minimalist director would approach the wuxia genre, and in retrospect it seems all too obvious that he does so with his famous realism. Simply put, he depicts the battles of master assassin Nie Yinniang as one imagines the true battles of a master assassin: over in a flash, with the minimal expense of effort required.
In the end, it makes The Assassin a uniquely difficult film to review. If your judging criteria asks what does the film set out to do, and how well does it do it, then the work is an unqualified success. At the same time, one cannot overlook that this is an extremely difficult text to engage with. Many will find it better suited as a studied bit of installation art than any kind of gripping cinematic experience, and they wouldn't be wrong. So, just, take note of that. I guess all there is to say apropos The Assassin is "head's up!"
Review originally published during the Cannes Film Festival in May 2015. The film opens in select theaters in the U.S. on Friday, October 16.
Sign-In to Vote
Tweet 0 Submit

Do you feel this content is inappropriate or infringes upon your rights? Click here to report it, or see our DMCA policy.
Chang ChenHou Hsiao HsienSheu Fang-YiShu QiThe Assassin

Agreed on most of this article. The most beautiful film I saw this year.

It's a breathtakingly beautiful bore.

Fair play to you with the review - it is one hell of a conundrum. I watched it in a packed cinema, clearly half the aud were expecting what it isn't. The walk-outs were regular. But happily I had heard what to expect, and adjusted myself accordingly. I feel for those expecting a chop socky fest. Hou's marketing folks have played a game that just might be considered unfair here.
What it is, is undeniably, luxuriously gorgeous. I shall take many key scenes, many swishes of silk with me for many years. But if someone says, "It's a boring waste of time", I get them. Doesn't make me feel good for them, but if you aren't tuned into the film's wavelength, tough times ahead.

Boring or not, I'm truly looking forward to this.

The film looks stunning and yet utterly boring at the same time. Definitely still seeing it in the theatres for pure stylistic reasons though. It feels like a film that should only be seen on the big screen.

I'm seeing much the same thing with Crimson Peak as I'm seeing with The Assassin: we've entered a phase where a movie is allowed to get away with the total absence of an engaging plot or character development that audiences become invested in, as long as it LOOKS gorgeous. I have no problem with slow-moving films that have unconventional narratives, but the masters of that form (like Tarkovsky or Ozu) were able to work such engagement into their approach. The Assassin's problem, for me, was that both its plot and characters were as remote as the Andromeda galaxy. Watching the film was like looking at a priceless vase behind six sheets of glass. We're told Yinniang is too sentimental to succeed as an assassin — but it's hard to tell from the blank-faced, automaton performance Hou requires of her. (Shu Qi's wonderful range as an actress was put to much better use in the deliberately silly Journey to the West.) It's a movie that sees itself as elevated Art, and places itself on a pedestal of its own making, when it could have been more willing to allow viewers in, *and* retained all the jaw-dropping cinematography into the bargain.

That's a considered reply Wagnerfilm. and my initial response was "right on!", but then i waited a while and re-read it. And it was the references to Ozu and Tarkovsky that turned me around a little. I agree, of course, that they were both usually masters of finding communicable meanings in breath taking beauty, and fully immersive cinema. But as I search through my memory for concrete details in their films, I find elliptical, fogged images and memories. Not the clarity that I often find in more conventional cinema. I'm going to wait and see The Assassin again before making a call on it. As an aside which you will enjoy I am sure, I watched the screening at Melbourne Film Festival, was mostly struggling like hell for the narrative meaning, and halfway through just sat back for the wash of beauty. After leaving the film, it was a long walk to catch the tram home, and on that walk, I heard a woman of about 25 years old explain the entire narrative, in great detail, to her slack-jawed partner. And I freely admit, I paced their walk as much as possible so that I could catch some of these free film notes. She was just so amazed that he didn't see what she saw. But I was very much on his side. Hopefully I'll do better second time around!