Review: BURNT, In Search Of Excellence (And A Story, And Authentic Characters, And...) 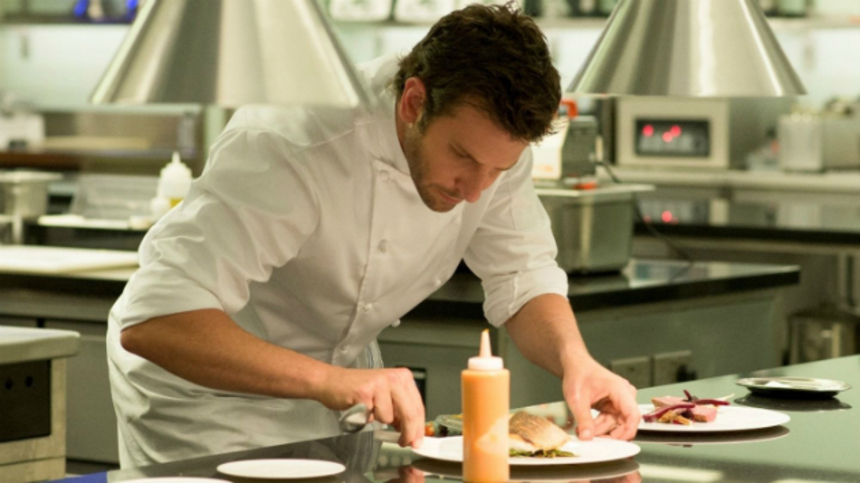 Bradley Cooper is not content with two stars. Oh no, no, no, he wants three stars, dang it, because that is what leading men always want: more, more, more!

In Burnt, a new film by pedestrian director John Wells (The Company Men, August: Osage County), Cooper portrays Adam Jones, a cook who reached the highest echelon in the restaurant business, namely, two Michelin stars for his Paris fine-dining establishment. Then he flamed out, a victim of his own addictions and excesses, and disappeared to New Orleans, where he kicked his long-held habits (on his own) and began doing self-imposed penance by shucking oysters anonymously in a common diner.

As the movie begins, he completes his self-imposed penance, walks out of the restaurant without a word, and walks or, perhaps, flies to London to reclaim his mastery of the cooking world. He is, of course, arrogant. He is, of course, brilliant. He is, of course, soon opening a restaurant bearing his name as the entire universe waits with baited breath for a bite of his sure-to-be-delicious food. When opening night goes badly, he rages furiously against his kitchen staff, throwing things, breaking things, yelling things, and even going so far as to laying his hands on Sienna Miller as he screams at her. He's passionate.

This is the best that Burnt can do: show a tired stereotype and pretend that it's fresh and new: Bradley Cooper screams! While wearing an apron! And pushing a woman around! Desperate to drum up drama, the screenplay by Steven Knight (Eastern Promises, drawn from a story by Michael Kalesniko (Iron Sky) sets Adam up as a loner in search of perfection, obsessively working all hours of the day and night to perfect his food. He is joined for many of those hours by Helene (Sienna Miller), who is ambitious -- not for power or money, but for culinary perfection.

They slave over hot kitchens to prepare dishes that eventually are lit by cinematographer Adriano Goldman as though they were timeless works of art. Little is said about the type of cuisine that Mr. Jones is serving, only that it must be 'the best,' as judged by the Michelin food judges. Adam mouths empty platitudes about what he wants to serve, and why he wants to serve it, but all that comes across is that he wants three stars and nothing else matters, certainly not his kitchen crew nor his customers.

The characters are frustrating, too. Tony (Daniel Bruhl), the owner (?) and maitre'd, is a gay man who pines for Adam. Helene (Miller) is a single woman who, eventually, pines for Adam. Michel (Omay Sy) is a cook who suffered from Adam's behavior in the past yet agrees to work with him again. Matthew Rhys is a long-suffering kitchen worker who happily takes Adam's occasionally abusive behavior. Emma Thompson is a wise psychiatrist who treats Adam and ignores his snappy comebacks. Uma Thurman and Alicia Vikander show up, briefly.

Burnt is a movie made by people who wanted to make a movie about a chef but didn't know how to make it interesting to anyone else. So they grabbed a mass of ingredients off the shelf, tossed them into a pot, cooked it all up, and served it up cold. That doesn't mean anyone needs to eat it.

The film opens in theaters throughout Canada and the United States on Friday, October 30.

Do you feel this content is inappropriate or infringes upon your rights? Click here to report it, or see our DMCA policy.
Bradley CooperDaniel BruhlJohn WellsSienna Miller