Wow. Fantastic Fest ended last Thursday but we are all still recovering from 8 (8!) days of magical mayhem. There were a ton of good movies and very few stinkers (not counting some of us on day 8). But it's over for another year and all we have is the memories and a shit ton of reviews. Check them all out below and our thoughts on a smorgasbord of questions in the gallery below. 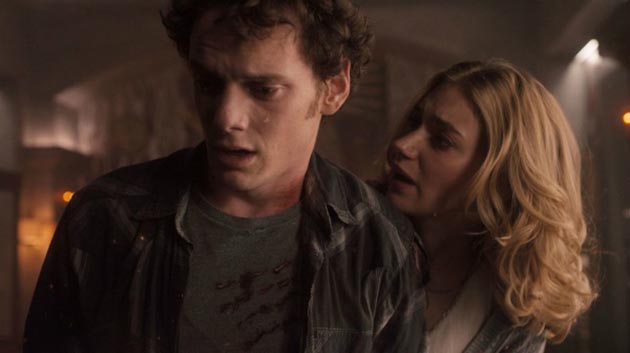 What was your top film of Fantastic Fest 2015?

Shelagh Rowan-Legg: Liza the Fox Fairy. It was sweet and funny and dark and weird, just enough batshit crazy without going too far. A nice treat in a genre that too often thinks it has to resort to going overboard with violence and gore. It had a great story, a heartbreaking main character, and a charming whimsy without being too saccharine.

Peter Martin: The combination of Mads Mikkelsen and Anders Thomas Jensen in Men and Chicken was irresistible, but followed closely by Green Room, April and the Extraordinary World, The Glorious Works of P.F. Zwaen, and Zinzana.

J Hurtado: Choosing a top film of Fantastic Fest is always a challenge, but it's the best kind. I could cheat and name at least 5 of the 21 features I saw in my four day sprint, but I'm going to have to go with Belgian Academy Award submission Brand New Testament. Bright, intellectual, and vulgar; this film ticked all of my boxes.

Michele "Izzy" Galgana : Demon was a very welcome, unexpected surprise. This odd tale of a groom becoming possessed in the middle of his wedding reception mixed elements of Don't Look Now with The Exorcist by way of a common life event --- with a downbeat ending that really stuck with me.

Ryland Aldrich: Fantastic Fest was P-P-P-Packed with great films, many of which I was lucky enough to see before the week of mayhem. The film I walked away from Fantastic Fest the most impressed with and will remember discovering there was River. This film just nailed the realism of the situation so well I was engaged from moment one. Runner up is the anthological horror Southbound which put nary a foot wrong in it's incredibly well polished multi-story narrative. 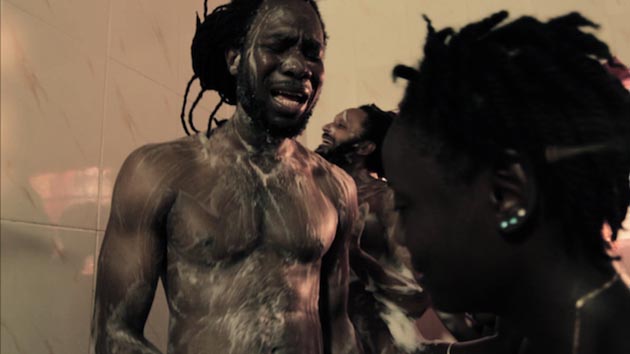 What was the biggest surprise or discovery of the fest?

Shelagh Rowan-Legg: Coz ov Moni 2. I went on a whim when I couldn't get into the Fantastic Feud. It was worth it; such a brilliant film, more of a visual album, but with a fun story, great music, and two engaging musicians. We need to see more films like this, films that do not follow Western film conventions.

Todd Brown: I think I'm going to answer a slightly different question than what's being asked here, but while I'd never argue it was one of the best films at the festival, my favorite experience at the festival was Ghanaian comedy action musical Coz Ov Moni 2. There's just something about the energy of that film that I adore.

Michele "Izzy" Galgana : Son of Saul was so well done and incredibly bleak --- as one would expect a film about the Holocaust to be... The way the film was framed let you see only certain things within the camera's periphery; and with the sound design, you got the full picture.... One that makes you doubt there was ever a god.

J Hurtado: I had heard almost nothing about Men & Chicken going in, but Drafthouse Films head James Shapiro suggested it (his company is distributing it) and I thought I'd give it a try. I'm no Mads Mikkelsen fanatic, but his performance as the slightly off hare-lipped id of an already unbalanced family won me over big time and I couldn't stop talking about it for the rest of the festival.

Peter Martin: The one-two punch of Lee Wang-soo's Dirty Romance and Speed, the former a gritty, often grueling character drama, the latter a glossy, often grueling youth drama, reflecting the director's growth from last year's I Am Trash. Bonus points for Tarkan vs. the Vikings, a glorious Turkish adventure. 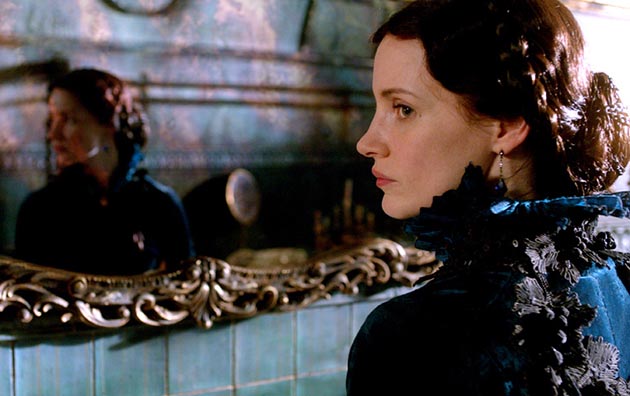 Michele "Izzy" Galgana : Jessica Chastain killed it in the first secret screening, which ended up being Crimson Peak. Her turn as an unhinged, homicidal woman --- a monster who we can understand --- was a revelation.

J Hurtado: No single performance really made me drop my jaw this year, but the one I keep coming back to as my favorite must be Catherine Deneuve in Brand New Testament. Never a woman to back away from left-field roles, Deneuve remains one of international cinema's great treasures with her role as a woman free to choose her own happiness in a love affair with a great ape.

Peter Martin: John Hawkes in Too Late. The movie itself is quite uneven, but Hawkes is always on target, unnerving, and completely sympathetic.

Shelagh Rowan-Legg: Noah Segan in Follow. This is a tough decision for me, given that I really disliked this film for many reasons, and wanted to walk out several times. But Segen's performance made me stay; despite a weak script, he made the role completely believable, and kept me guessing as to where he would go next. If one actor makes you overlook a film's many weaknesses, that's a great performance.

Todd Brown: I've got to go with Richard Jenkins in Bone Tomahawk. He takes what is essentially the comic relief character - the only bright bit in an overwhelmingly bleak film - and just layers it with so much pathos. It's a highlight of an already impressive career. 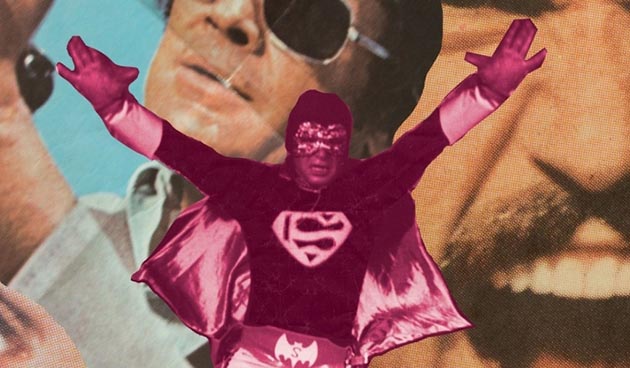 What was your biggest disappointment of the fest?

Michele "Izzy" Galgana : Remix, Remake, Ripoff seemed like it would be a really fun exfoliation on the Turkish films that ripped off Hollywood, but instead, we got a very boring retread of an era.

Shelagh Rowan-Legg: High-Rise. This probably shouldn't have surprised me, as I've only liked one of Ben Wheatley's films so far, but I had hoped that his particular eye would go well with Ballard. Alas, while lovely to look at, it was a superficial, self-indulgent film with little to recommend.

Peter Martin: That I've seen only half the films programmed. I want to see the other 40!

Todd Brown: Fell victim to the Fantastic Flu for the final two and a half days. Night sweats are fun! Still laid up at home now.

J Hurtado: Well, my biggest disappoitment is a bit of a cheat. It is the fact that I was only able to stay for four full days of movies. I missed Green Room, The Witch, Anomalisa, Evolution, Liza the Fox-Fairy, and many more.

Ryland Aldrich: This is way out of left field but my biggest disappointment is that I can't imagine I'll ever be able to go to Fantastic Fest for all 8 days again. I love it so much but it is just a bit too long and a bit too exhausting. Let's drop the Thursdays and make this puppy Friday to Weds. That's probably the only way I'll see the closing night party again, I'm afraid to admit. 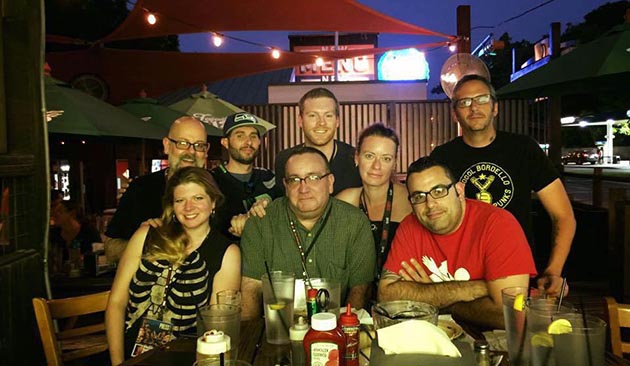 What was your highlight from the non-film entertainment?

J Hurtado: This was my first year partaking of any non-film entertainment. My favorite moment was outside of the festival activities altogether, it was having dinner and great conversation with the ScreenAnarchy Team the night before I left to rejoin the real world.

Peter Martin: I focused almost entirely on the films this year, but my non-Fantastic Fest highlight was definitely seeing Kraftwerk in concert -- in 3D! -- with my friend Hugues Barbier. Also not an official event, but an evening to be treasured: dinner with my ScreenAnarchy colleagues. And, of course, meeting new film-crazy friends adds something new and unexpected, and this year was no exception. Plus, catching up with old friends and acquaintances, or at least seeing them pass by in their busy-tude, was a pleasure.

Todd Brown: It was great being back in the Fantastic Feud ... That's always a good time but the teams this year were particularly fun, the crowd was into it and I may have drunk slightly too much whilst embracing my role as the heel.

Shelagh Rowan-Legg: One of the best things about Fantastic Fest are the extra-curricular activities. I attended the Machine Gun and Assault Weapon event. I'm an archer, and thought, being in Texas, to give guns a try. And I'm glad to discover that indeed, I do not like guns. But it was worth the trip.

Michele "Izzy" Galgana : My highlight was watching Guillermo del Toro watch the Fantastic Debates, with all its kaiju versus Godzilla fun. Plus, it was fun to watch Annick punch a guy.

Ryland Aldrich: The Nerd Rap this year was particularly ridiculous. Those fool are so damn good. 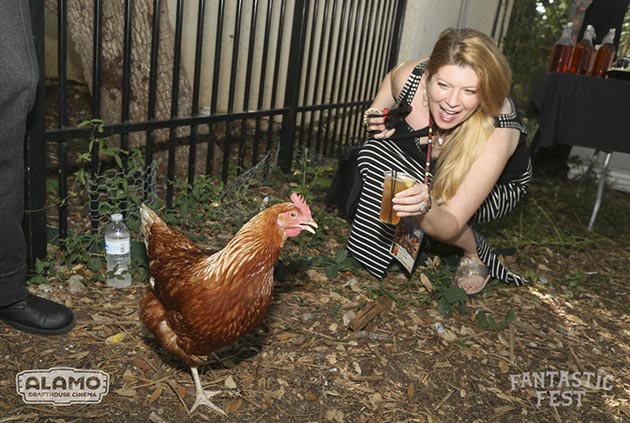 Name your single most Fantastic moment of the festival.

Peter Martin: Watching Sensoria, the directorial debut of Christian Hallman. I first met Chris at Fantastic Fest in 2006, the second edition of the festival, when he appeared with Frostbite, a film he produced. Seeing him again concluded a decade of watching fantastic movies for me, a moment filled with poignancy and horror; I must be getting old.

Todd Brown: Mensa from the Fokn Bois jumping on stage with a rendition of Sextraterrestrial Sex before the Nerd Rap Throwdown. That was pretty amazing and guest budget very well spent.

J Hurtado: Not a single moment here, but a feeling of joyous reunion throughout the festival. I'm pretty sure I say the same thing every year, but it's always true. There's no movie geek heaven quite like Fantastic Fest.

Ryland Aldrich: Saturday's luncheon at Tim's was a bathwater warm way to kick back and work off the Fantastic Feud hangover with good friends.