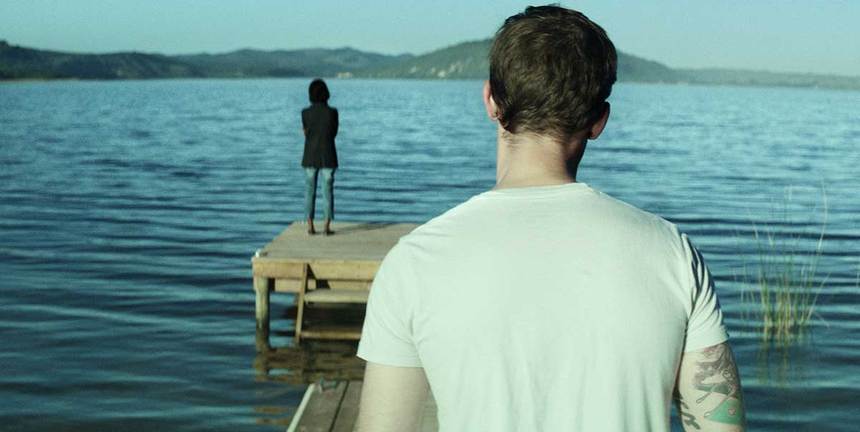 South African festival darling Oliver Hermanus continues his remarkable run of international acclaim with his third effort, The Endless River. Selected in competition in Venice before coming here to Toronto Hermanus delivers a thematically challenging and gorgeously rendered yet emotionally distant portrait of violence within his home country.

Gilles (Nicolas Duvauchelle) is a French ex-pat recently moved to a small South African town where he lives on a remote farm with his wife and children in what - they hope, at least - should be an idyllic life. But that life is shattered beyond repair when intruders force their way into the family home and all of Nicolas' family are brutally killed. As Gilles descends into an alcohol fueled rage his only real human connection comes in the form of Tiny (Crystal-Donna Roberts), a young black woman working as a waitress in a local diner whose own husband has just been released from a four year stint in prison for gang related crimes. As they move closer into one another's orbit tragedy seems inevitable.

A beautifully shot film that takes full advantage of South Africa's natural beauty, The Endless River opens with a clear and deliberate call back to the frontier westerns of the 1950s. From the framing to the credits to the score and even the wardrobe - despite the film being very much set in the here and now - the film clearly evokes the tone of a time gone by, which presents a fascinating juxtaposition with the realities of life on the actual frontiers of lawlessness and racial tension that very much exist in South Africa today. It makes for a fascinating beginning but one that Hermanus never quite seems to fully capitalize on.

Because while the technical work on the film is all top notch and the performers are all strong - Roberts is particularly engaging as Tiny - The Endless River suffers from issues at both beginning and end that leave the main body of the film feeling strangely distant and unengaging. At the outset the film simply fails to establish a proper baseline for any of its characters. We simply never know them when life is good and so we have neither an emotional investment in them nor a guideline to measure change and progress from when things go bad. We meet them, they meet each other - in overly convenient fashion - and then things immediately go to hell, leaving us to watch a man we don't particularly know or care about at all yet become an angry, crying drunk for about half the run time of the film. And while we know mentally that we should care it's very hard to do so when we don't actually know him at all. Similarly, the film ends on a very abrupt and overly ambiguous note that seems unclear as to what point is being made. It stops more than it ends, if that's a distinction that makes sense.

Hermanus is certainly an interesting young talent and the dominant voice on the arthouse side of the spectrum from this part of the world. His voice is strong and continuing to develop but The Endless River seems unlikely to find an audience at all outside of the festival circuit.