Toronto 2015 Review: ROOM, A Character Study Wrapped In A Thriller 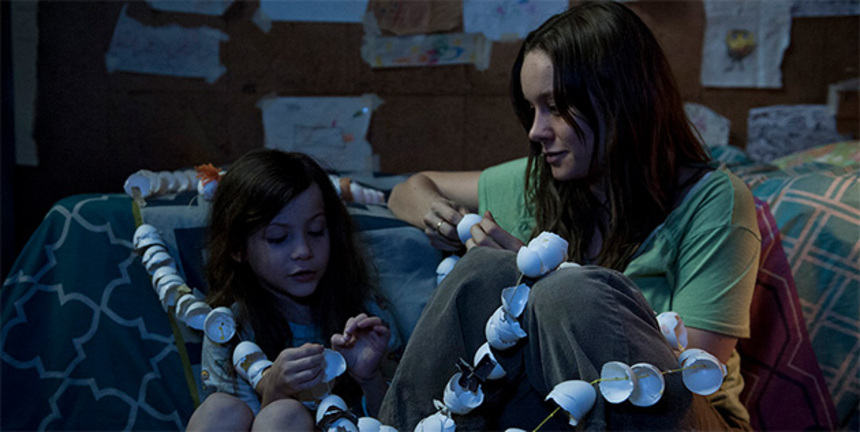 At their best, films can literally change our perspective. We can be put into the position, visually and psychologically, of the characters on screen. With montage we see through their eyes, with dialogue we get into their souls.

It's a rare film that toys as well with our perspective as Room does. It's a beautifully simple premise - a woman and her child are held captive in a small space, occasionally visited by their captor - and one that easily could delve into dull horror tropes.

Brie Larson stars as Ma, a harried-looking young woman who is raising a son within the confines of the small space. Her son Jack is turning five, just coming to terms with his surroundings. His world is one where the objects in front of him are real, but all other aspects beamed in on television - people, trees, animals - are merely two dimensional representations for his entertainment. As a device to keep one's intellectual expanse narrow for the sake of sanity, it's harrowing; as a parental tool, it's entirely believable.

Ma gets unwilling conjugal visits from Old Nick (Sean Bridgers), witnessed by Jack through the slats of his wardrobe nest. It's awful, to be sure, blood chilling to think about, yet from the muted expression of the child, it seems almost banal. For such visits are clearly regular, just another aspect of the stunted life that Jack takes for granted.

The film is more than just this one note, however, and as its scope enlarges the deeply resonant aspects of the story continue to emerge. Joined by the likes of William H. Macy and Joan Allen, the storyline takes on even more richness, with Larson exhibiting fantastic range. This could easily be a shrill performance, overly arch, but Larson's take is pitch perfect.

So too is the remarkable turn by young Jacob Tremblay. His Jack is beautifully realized, a credit no doubt to both his skills and some patient and astute direction by Lenny Abrahamson. Abrahamson's last film, Frank, had some decidedly delicious moments, but it didn't gel, the shifting tones of the musical mayhem at times discordant. There's no fault here; tonally, Room completely works, earning its fears and tears in equal measure.

Beautifully shot in and around Toronto, this is a highly sophisticated film that's also accessible to a wide audience, one that deeply probes the emotional circumstances of its characters while providing a canvas to witness different, and very human, reactions. It's insightful and provocative, a far cry from the tabloid-y dreck that the film's premise could easily elicit.

Room is a delight, a film both thoughtful and moving, with at times an astonishing capacity to get under one's skin. It's a thrilling thriller and a weep-worthy character piece, all wrapped into one, and all the better for its ambition and its execution.

Do you feel this content is inappropriate or infringes upon your rights? Click here to report it, or see our DMCA policy.
Brie LarsonJacob TremblayLenny Abrahamsontoronto 2015Emma DonoghueSean BridgersWendy CrewsonDrama