Review: BLIND, A Stunning, Sensitive Ode To The Lonely 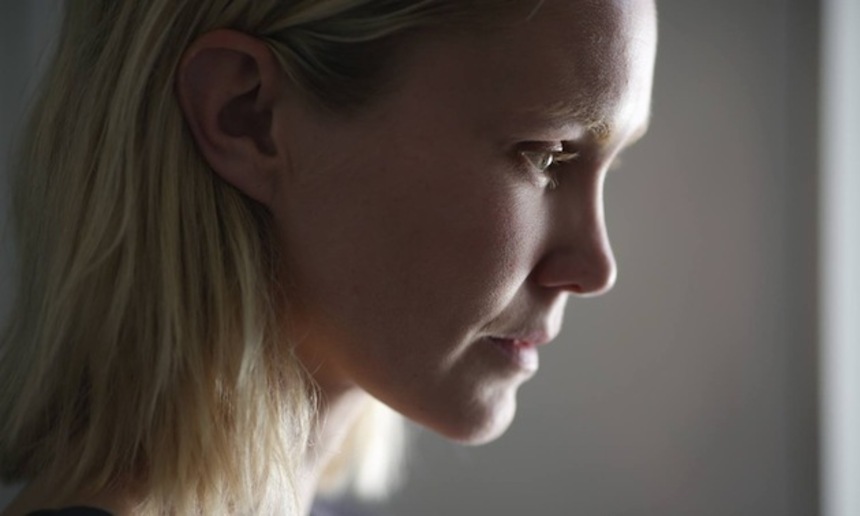 What we see: A street in Oslo, Norway. A dress shop. Pedestrians stream on by. Standing inside of the shop is a German Shepard. It Barks. Spittle hits the window. Pedestrians stream on by. What we hear: A woman's voice, Ingrid (Ellen Dorrit Petersen), collecting and rearranging the world through descriptions. She then dismantles these descriptions... of the world itself, of you, me, us, and back to Ingrid. What we see: Her. Lean, pointed features, blonde hair and eyebrows on the verge of turning bone-white. Ingrid is in her apartment. Her hand traces the counter tops. Find the edges. She makes tea. This is what we see. What she sees is nothing and the same.

Due to the degenerative blindness she's been afflicted with for several years, Ingrid's bright galaxy-lit eyes see nothing. But what her mind's eye sees is the world. Built up. Knocked down. Shifting focus. Ingrid used to be a teacher. Now, holed up in her apartment, she writes, interweaving her tale, her husband's tale, with the imagined tales of other lonely residents of Oslo. But are they imagined? And does this point make them any less real, any less capable or in need of love?

For those familiar with Eskil Vogt's screenplays for the Joachim Trier directed Reprise and Oslo, August 31st, Vogt's own feature directorial debut Blind, is sure to be highly anticipated, and for good measure. It carries with it the same sensitive, melancholic touches of Trier's work, with a greater penchant for a narrative both byzantine and bizarre. Blind is a full-on embrace of the more unique tricks one can find in the cinematic language.

The stories Ingrid is telling -- of her husband Morten (Henrik Rafaelsen), of the misanthropic voyeur Einar (Maris Kolbenstvedt), of single mother Elin (Vera Vitali), -- mutate before our very eyes. In one scene we have Einar and Morten, two old college friends, catching up after a film. As Morten's own anxieties and depression begin to break the surface, the location shifts from a cafe to a bus, then a train; or a bus when Morten is talking, and then in Einar's reaction shot back to the cafe, finally settling on the bus. While humorous and eccentric, the transitions are in no way jarring as they further the ebb and flow of the emotions on screen.

These rather surreal touches are cradled in Vogt's serene naturalism, but this fact may have an ill effect on some audience members. While I certainly found it to be the film's boldest and most successful stylistic and structural move, some will find it to be a great detractor in their enjoyment and understanding of what is ultimately, Ingrid's story: her inability to face her whole self and what we come to understand as her impending motherhood. As performances go, all four by the main players are top notch, full of nuance and humor; tripping, lumbering or tiptoeing along, this quartet shares the burden of a great loneliness, vicious in its silent attacks, bringing along such so-called vices as eccentric sex fetishes or alcohol. Ingrid views her life, but especially the life of her husband, to be boring. So one must play it up. Even in your head. A moment between them in bed plays out in several ways: Morten says he's replying to work emails, but Ingrid imagines him on a sex chat which then turns into an intimate conversation with Elin, who once she starts an affair with Morten goes blind as well.

Vogt as a filmmaker isn't interested in spelling out what is supposed to fit in the real or logical world. His world is an intimate and personal one, playing by its own rules if it sees fit. While naturalistic by sight, the film is reminiscent of many works, from Hitchcock (spirals hidden in women's hairdos) and Godard (scenes of street life, sound/picture contrasting quirks). Perhaps most important are the nods to the impressionistic, psychological works pioneered by Norwegian masters like painter Edvard Munch and writer Knut Hamsun. These were works wrought with the fears of the artist, of the creator; Of the inability to communicate and of the terror at what one would create if so forced to.

As it goes Ingrid, in her own ways, plays the maker, a Goddess, a spirit forming, shaping, thrashing the lives of mortals, merely because she doesn't know what to do with her own.

While both Reprise and Oslo, August 31st focused largely on the male psyche, all three films share a tapestry of tropes and themes: from the fears of a stagnant life, to a focus on the mentally or physically ill or disabled, to that of writers and the very nature of expression and storytelling.

As such Blind looks to complete a trilogy that started with the young authors in Reprise, continued with the somber 30-something gazes found in Oslo, August 31st, and is now arriving at the more mature, if wildly imaginative viewpoint of people entering their forties. Each picture is graced with something I find so inherently Norwegian: It is that of a great sadness; a sadness that is to be celebrated and thrust up into the light. Let's then call the three works trilogien melankolsk.

In an small local industry often dominated by rambunctious genre fare, Trier (credited here as associate producer) and Vogt's work then stands as the high mark for 21st century Norwegian drama. While their films are wonderfully universal and accessible, with each consecutive picture it becomes inherently clear that they, and the team they've gathered, are the great cinematic chroniclers of the city of Oslo.

This was no more apparent than in a brief section of the film which finds Einar, our lumbering red-headed loner, walking the streets of the city after the 2011 bombing and massacre. Einar, once a ghost to passersby, is suddenly seen by all, merely because his unhappiness is perceived by the citizens, united in a love that grew from one man's hate, as their own. Weeping on the street, Einar, afraid of women, but ever so in love with the idea of them, is approached by a beautiful girl. She then embraces him with such tenderness that it left me in rapturous tears. I, a skinny, little cinphile, saw myself in this giant of a man: often mute, seemingly frightening, but really a very gentle soul.

For that very real moment during the summer of 2011, no one was blind to one another in the city of Oslo, Norway. As we the audience see them, the citizens of the city see each other. Einar sees. Morten sees. Elin sees... While Ingrid imagines it all. And then, captured in what is perhaps the most powerful shot of the year, she splays herself bare against the window of her apartment, her cocoon, asking to "please, see me."

Blind opens theatrically in the U.S. on September 4 at NYC's IFC Center. More info on the film can be found here. This review was originally published in September 2014 during Fantastic Fest.

BLIND a film by ESKIL VOGT (Trailer) from KimStim on Vimeo.

Do you feel this content is inappropriate or infringes upon your rights? Click here to report it, or see our DMCA policy.
blindEllen Dorrit Peterseneskil vogtjoachim triernorwaynorwegian film