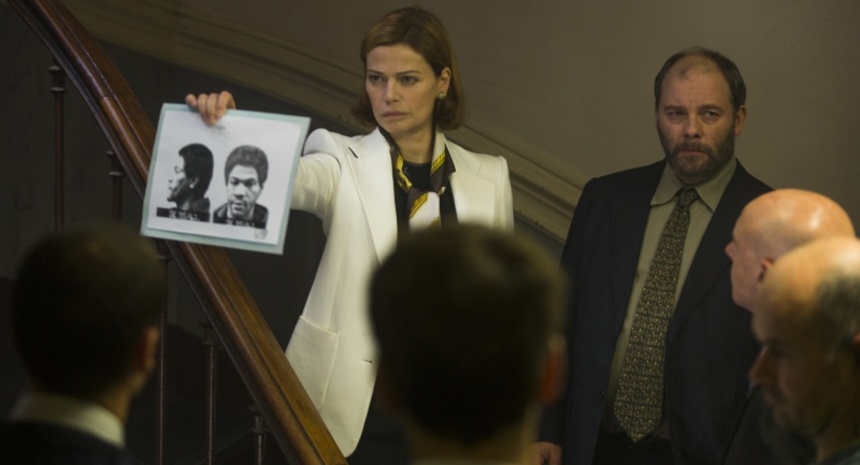 The first body was discovered in 1991, a young woman raped and killed in clearly sadistic fashion in her own home in the French capital. She would be the first of seven, the leading edge of a wave of murders spanning six years that would become France's most notorious multiple murder case with the police dubbing the unknown killer simply SK1, or Serial Killer 1. The press preferred the far flashier moniker The Beast Of The Bastille.

The true events of these crimes provide the subject matter for Frederic Tellier's L'Affaire SK1, a character driven piece that moves between the long running criminal investigation and the eventual trial of (eventually) convicted murderer Guy Georges in a style that is far more serious docudrama than high octane thriller. And, frankly, given the shocking nature of the true crimes at hand here, the film is all the better for taking that approach and refusing to sensationalize.

At the core of the story is Frank Magne, a rookie detective handed as his first task the unenviable assignment of wading through old, open case files to see if fresh eye can discover anything that previous investigators may have missed. And in the case of murdered Pascale Escarfail he doe, thereby triggering a years long obsession that would grow to consume Magne's professional life and he struggled against limited resources, poor procedure and internal politics to eventually run the killer to ground.

That killer - as the film makes no bones about right from the outset - is Guy Georges, a homeless man with a violent past who the film simultaneously follows through his trial to some degree humanizing the man himself and trying to understand how someone like this comes to be, but largely using the trial as an investigation into the lawyers who defended this man, trying to understand their own emotional journey throughout the process.

In the context of recent crime films, Tellier's effort falls closer to Bong Joon-ho's Memories Of Murder - both films revolving around the frustrations of good cops caught in a broken system, trying to grapple with an unspeakable evil - than to anything else that comes easily to mind, though the underlying story here is quite similar to the notorious Zodiac Killer or Canad'a Paul Bernardo. And while the finale of the courtroom sequence feels odd and perhaps veers a touch towards emotional manipulation - with Georges' own defense attorney's openly pleading with him to confess his crimes in open court, behavior that would lead to an immediate mistrial were it to occur on this continent - the film as a whole stands as a remarkably assured and polished take on thorny subject matter from a very promising new director.

Do you feel this content is inappropriate or infringes upon your rights? Click here to report it, or see our DMCA policy.
beast of the bastillefantastic festfrederic tellierguy georgesl'affaire sk1reviewserial killer