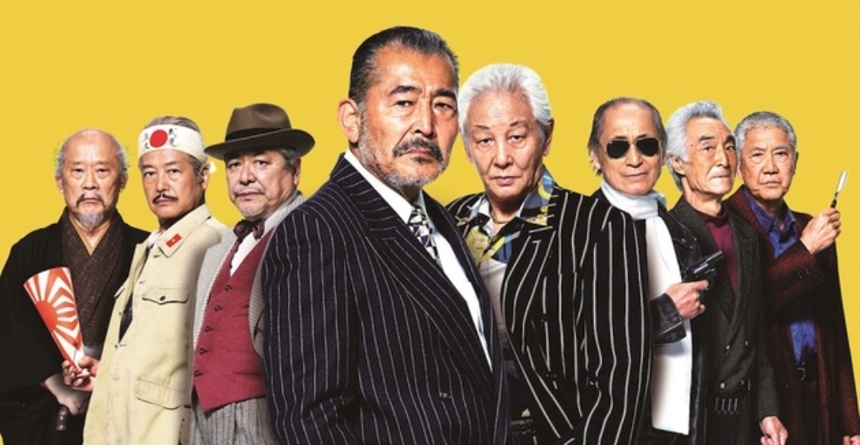 Takeshi Kitano's latest film Ryuzo and His Seven Henchmen merges the famous director's two favorite movie genres: comedy and gangster thriller. Gathering a slew of older actors from his earlier films, Kitano pitches his geriatric protagonists as a group against their younger replacements, but solely for comedic effect. Those who expect the old clown to have made a love-letter about the nobility of old-style yakuza have a nasty surprise waiting for them.

The titular Ryuzo is an old retired yakuza, bored out of his skull and hanging on to his own myths of a glorious gangster past. Then, one day, he headbutts with one of the new post-yakuza ex-biker gangs, who run the modern underworld of phone scams and extortion rackets, and who regularly target the elderly. Irritated by the youngsters' lack of honor, respect and discipline, Ryuzo contacts his legendary old friends and enemies from his yakuza days. Together they form a new yakuza clan, with Ryuzo as boss, and commence to oust the ex-bikers from their fancy offices.

The central gag here is of course that Ryuzo's clan-members are old, most often debilitatingly so. Indeed, the average age of the actors playing the group is a venerable 73, and Takeshi Kitano doesn't shy away from the oldest, most vulgar jokes to point this out. There are feebleness jokes, stumbling jokes, angry muttering jokes, and many, MANY fart jokes. These being yakuza, add some missing finger jokes to that as well.

But more importantly, even when Ryuzo's clan has their bodies functioning properly, Kitano shows there is nothing lovable about them. They are still just a bunch of thugs, as egoistic, vicious and violent as their younger counterparts. Things in Japan are gleefully shown to be corrupt and rotten, but don't expect any "old values" to come to your rescue, because they used to be corrupt and rotten too. Any opportunity to start admiring Ryuzo and his henchmen is resolutely punched to death. Indeed, when actor Fuji Tatsuya uncovers himself to show off Ryuzo's yakuza tattoos, you might notice he is in remarkably good shape for someone 74 years old, but immediately he gets fart jokes, crossdressing jokes and lady-boy jokes thrown at him.

Ryuzo and His Seven Henchmen is topped to the rim with jokes, some of them hilarious, many of them funny, many of them cringe-worthy, some of them embarrassing. Kitano has credited himself here as "Takeshi Kitano" for writing, editing and directing, and as "Beat Kitano" for his (short) appearance as an old policeman, gently nudging Ryuzo back into his old ways. He has everyone dancing on his ropes here, and he himself might actually be the one having the most fun. When he's at his most acidic, the film jumps to life, but whenever he just relies on old jokes, the film slumbers and slumps.

In the end, Ryuzo and His Seven Henchmen is undeniably entertaining, but too shallow to ever be mistaken as a masterpiece. Kitano's best rest unchallenged.


Ryuzo and His Seven Henchmen played this weekend in the Rotterdam leg of the Camera Japan Festival, and will be screened in Amsterdam this coming Sunday as part of the festival's traveling selection.
Tweet Post Submit

More about Ryuzo and His Seven Henchmen