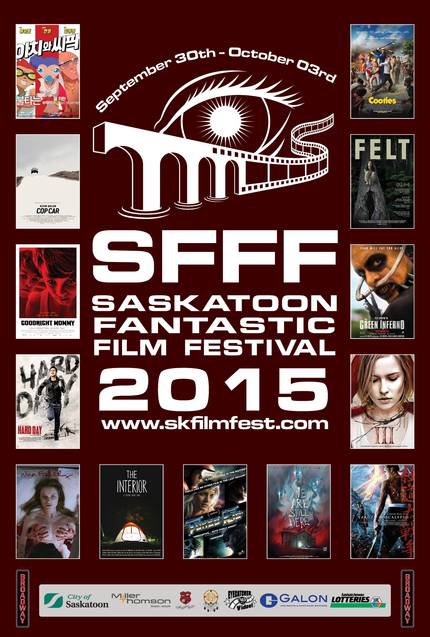 The 6th Annual Saskatoon Fantastic Film Festival has come out of the gate swinging with the announcement of its feature film line-up. Or should I say, come out of the gate driving like a bat out of hell.
Jon Watts' sensation Cop Car will open the festival, and in keeping with the crazy road trip theme, new cult classic Turbo Kid will close. Yes, the Canadian Prairies aren't as quiet and sedate as some might think, as this festival has established with its biggest and best programming to date.

And there are lots of treats in between: the spooky haunted house tale We Are Still Here, the hilarious teacher's nightmare Cooties, the intense and brutal Felt, the chilling thrills of A Hard Day, the off-the-wall insane Aachi and Ssipak, and much more. Full list of features in the press release below. Saskatoon, you don't want to miss this.

Saskatoon Fantastic Film Festival, Saskatchewan's only genre film festival, announced its film lineup. The 6th edition of the festival returns to the hallowed hall of the Broadway Theatre from September 30th through October 3rd. This year's lineup features films from from some of genre cinema's most recognized names (Eli Roth and Takashi Miike) and quite a few from fresh faces to the scene (Canadian directors Trevor Juras and RKSS). We guarantee there is a little of everything for everyone.

This year's festival will open with the thriller COP CAR. Kevin Bacon stars as a small town sheriff who has lost his cruiser to two young boys who have taken it on a joy ride. Little do they know that trouble is brewing in the trunk of the car. After the movie ends we guarantee you will be asking your friends, "Did you open the trunk?"

The closing film will be the Canadian sci-fi action flick,TURBO KID. If you feel you have not had your fill of blood and laughs by the end of the festival we guarantee that TURBO KID will be the perfect way to end your festival weekend. Already a darling of the international festival circuit and winning awards hands over bloody fists we are happy to include this Canadian genre hit to our lineup.

"This year's line-up of films really shows just how strong the last year has been for genre films. The festival was able to strike a great balance of crowd-pleasers to the more challenging genre films that defy convention. On a personal note I really hope we can get a huge crowd out for the 2006 Korean cult animated movie AACHI & SSIPAK which we are showing in the original language with subtitles. It has taken us 8 years to program it and I hope Saskatoon is ready for it," said festival founder and director John Allison.

COP CAR / U.S. (Director: Jon Watts) A small town sheriff sets out to find the two kids who have taken his car on a joy ride. As long as the kids have not opened the trunk everything should be alright.

GOODNIGHT MOMMY / Austria (Directors: Severin Fiala and Veronika Franz) Twin brothers wait for their mother to return home. When she comes home, bandaged after cosmetic surgery, nothing is like before. The children start to doubt that this woman is actually their mother.

YAKUZA APOCALYPSE / Japan (Director Takashi Miike) When a bout of Vampirism threatens a small town and the local Yakuza gang's livelihood could it get any worse? When the modern monster Kaeru-Kun shows up it proves it can.


NINA FOREVER / UK (Ben Blaine and Chris Blaine) Rob falls in love with a coworker, Holly. Their relationship is complicated when his last girlfriend Nina, who dies in a car crash and unable to find rest in the afterlife, comes back to life to sarcastically torment them whenever they have sex.

III / Russia (Director: Pavel Khvaleev) When Ayia's sister becomes ill to a mysterious illness she discovers that only by going into Mirra's sick subconscious mind will she discover the true cause of her disease. Ayia is ready to go through this terrifying ritual, dive into the depths of the subconscious mind, and face the demons residing there.

AACHI & SSIPAK / Korea (Director Jo Beom-jin) In a future where energy is made from fecal matter, the government rewards defecation with "juicybars". Small-time hustlers try to get rich while fending off the mutated Diaper Gang.

A HARD DAY / Korea (Director: Kim Seong-hoon) Detective Go Geon-soo is having a hard day. On the way to his mother's funeral he hits someone with his car. He starts by hiding the body in his trunk and eventually will hide the body in his mother's casket. But someone has been watching all along, and Geon-soo gets a mysterious call from a person claiming that he was the sole witness to the crime, who now begins to threaten him.

WE ARE STILL HERE / U.S. (Director Ted Geoghegan) In the cold, wintery fields of New England, a lonely old house wakes up every thirty years - and demands a sacrifice. A couple, grieving the loss of their son, move into a remote New England farmhouse. Not only does the house have a horrible past but the townsfolk are not all that nice either.

THE GREEN INFERNO / U.S. (Director: Eli Roth) A group of student activists travels to the Amazon to save the rainforest. In the wake of a terrible plane crash discover that they not only are they not alone, but they are also on the menu.

FELT / U.S. (Jason Banker) A woman creates an alter ego in hopes of overcoming the trauma inflicted by men in her life. When she gets into a relationship with a young man has she been able to put her past behind her?

COOTIES / U.S. (Directors: Jonathan Milott and Cary Murnion) A mysterious virus hits an isolated elementary school, transforming the kids into a feral swarm of mass savages. An unlikely hero must lead a motley band of teachers in the fight of their lives.

THE INTERIOR / Canada (Director: Trevor Juras) A listless young man, upon learning he is ill, leaves his job, girlfriend and city behind, and ventures alone into the British Columbia interior, bringing his fears and anxieties with him.

TURBO KID / Canada (Directors: RKSS aka. François Simard, Anouk Whissell and Yoann-Karl Whissell) In a post-apocalyptic 1997, THE KID, a young solitary scavenger obsessed with comic books must face his fears and become a reluctant hero when he meets a mysterious girl named APPLE.