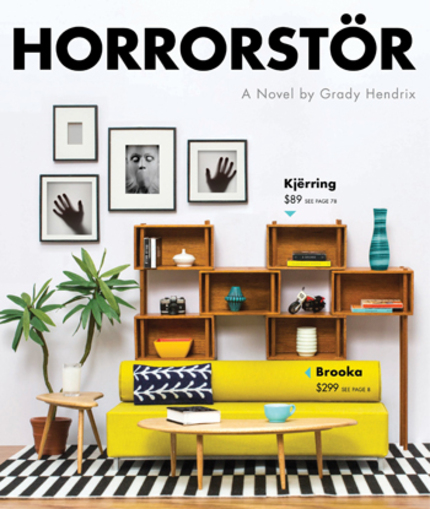 Regular readers of this space are well familiar by now with the manic genius of one Mr Grady Hendrix. The former Variety writer, and pink-suited dervish behind (and often in front of) the scenes at the New York Asian Film Festival is a great favorite around these parts, both as a quality human being and one hell of a crack film writer. Hendrix, for example, once left me in tears by devoting an entire film review to the state of Donnie Yen's hair that somehow still told me everything I could possibly need to know about the film in question (it was Dragon Tiger Gate).

And it turns out he's pretty great at writing about things other than film, too. Which probably explains why Buffy The Vampire Slayer producer Gail Berman snapped up TV rights to Hendrix's novel Horrorstor not so long ago. And now with the series ordered to pilot over at Fox, we learn more about the team behind it. There's a producer from The O.C. involved, which is all well and good if you've got a thing for Mischa Barton. And then there's the other guy freshly announced as an executive producer. The guy who, it turns out, actually steered Berman to the book in the first place. That guy's Charlie Kaufman. Yes, that Charlie Kaufman. Which means that as much as I love Grady I must now hate him as a matter of principal as a way of coping with my immense jealousy. Damn. This could be rather good.

Do you feel this content is inappropriate or infringes upon your rights? Click here to report it, or see our DMCA policy.
charlie kaufmangail bermangrady hendrixhorrorstor