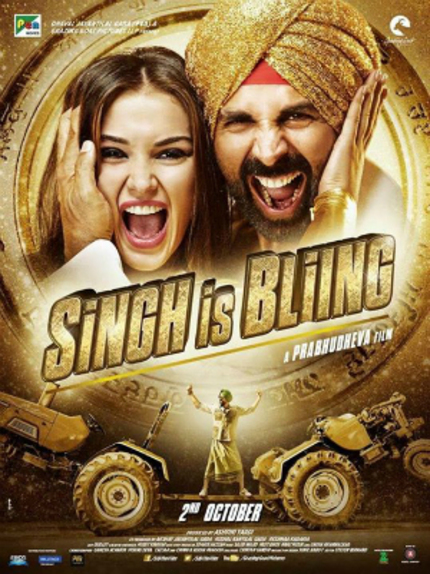 Back in 2008, Akshay Kumar set the Indian box office on fire with Singh Is Kinng. That film introduced filmgoers to Akshay's Harpreet Singh, a guileless Sikh do-gooder who gets caught up in mafia shenanigans. It also featured Akshay rapping a duet with Snoop Dogg on the soundtrack, which amuses me to no end. This October, the film gets a sequel with Singh Is Bliing (misspelling intentional).

Singh Is Bliing is directed by Bollywood's new master of hyperbole, Prabhudeva. Prabhudeva's previous directorial efforts include Salman Khan's Wanted, Kumar's Rowdy Rathore, and Ajay Devgn's ludicrous Action Jackson. While his films have taken on a repetitive feeling, I'm a fan of Kumar's goofy charisma, and this kind of action spectacle suits him, so I'm going into Singh Is Bliing cautiously optimistic.

The new film features Kumar as Raftaar Singh, a young (?) man who must choose between leaving the nest to find a job and having an arranged marriage. He flees, and runs into trouble, as men in his situation are wont to do. The film co-stars Amy Jackson (Shankar's I) as a clothesrack, and the ineffably sinister Kay Kay Menon as a gangster who has it in for Kumar. Jackson doesn't inspire much confidence, but Kay Kay Menon is a guilty pleasure who doesn't get nearly enough work.