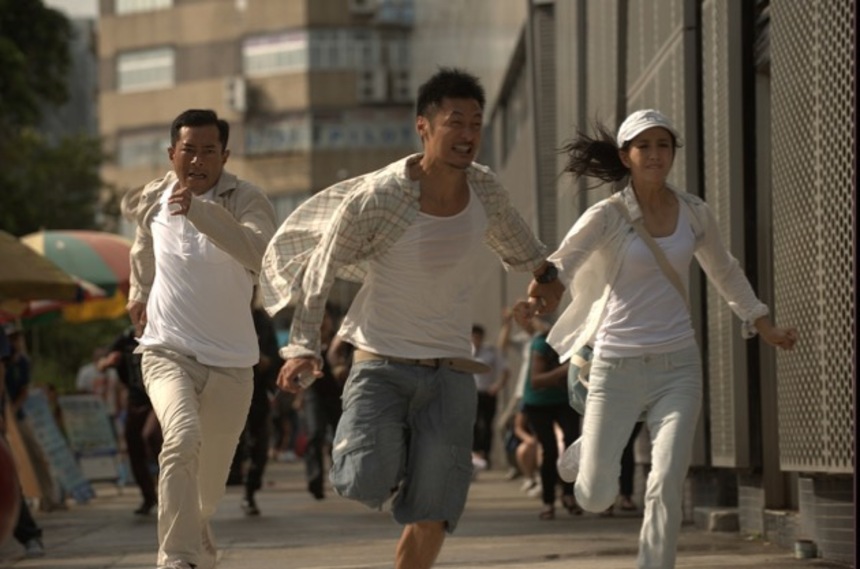 Ringo Lam's first feature in 12 years sees the Hong Kong director return to familiar territory, as a former cop and his tearaway younger brother take on a violent gang of Taiwanese thugs after their paths cross that of a beautiful mainland woman.
Since the 2003 Jean Claude Van Damme actioner In Hell, Lam has been all but absent from the filmmaking scene, with only a segment in 2007's Triangle to his name in the interim. Wild City, which Lam also wrote, sees the helmer of City On Fire and Full Contact return to the bullet strewn streets of Hong Kong in typically assured fashion.
Coming to the aid of a drunken patron, former-cop-turned-bar-owner T-Man (Louis Koo) takes the beautiful Yan (Tong Liya) to his mother's house but soon discovers she is in serious trouble. Set up by her lawyer boyfriend, Chiang (Michael Tse), Yan was to be the sweetener in a deal to secure a gaming license for a client, but instead Yan ran off with a suitcase full of cash and gold.
T-Man and his wayward brother Chung (Shawn Yue) agree to help Yan, but soon find themselves way out of their depth. Not only has Yan's would-be suitor enlisted Blackie (Joseph Chang) and his gang of thugs to kill her, but Sam Lee's local triads and T-Man's old colleagues on the force (including Simon Yam, Philip Ng and Philip Keung) are also on their trail. What follows is an intricate game of cat and mouth as they are pursued all over the city, from the sleepy waterfronts of Sai Kung to the bustling streets of Central.
At his peak, Ringo Lam was praised for his kinetic action sequences and densely-plotted scripts, and regularly name-checked in the same breath as such Hong Kong luminaries as John Woo and Tsui Hark. Lam similarly headed West in the mid-nineties as the handover loomed, after which he worked on a variety of modest projects both in Hong Kong and the US. Unfortunately, his achievements overseas proved even less successful than those of his contemporaries, and in 2003 Lam decided to take a break from filmmaking.
Wild City may not be the momentous comeback that fans are hoping for, but it is no disaster either. Leanly plotted and briskly paced, Lam's film touches on familiar themes such as greed, corruption and loyalty, while interspersing a healthy sprinkling of action beats along the way. However, it must be conceded that Wild City lacks any truly standout set pieces. The stunt work is competent rather than innovative, and there is a notable lack of martial arts in the street scuffles (which is particularly disappointing considering what we know the likes of Philip Ng and Shawn Yue can do).
Instead of being the all-out action romp it could so easily have been, Wild City genuinely seems more interested in pontificating about the corrupting influence of money on the human soul. It stops short of pointing the finger at mainland China, instead conceding that greed is a demon that lurks inside all of us, but it is a simple and obvious message, which is somewhat overstated here.
Elsewhere, Wild City seems to deliberately avoid fleshing out potential sub-plots or broader themes that surface in its rather slight narrative: women being treated as commodities, Chung's path to redemption, a possible love triangle between Yan and her two sibling protectors, Taiwan's relationship with Hong Kong and the mainland. All of these aspects are present yet left undeveloped, which would be forgivable if Lam had packed Wild City with top drawer action instead, but as it stand only accentuate the film's overall simplicity.
While certainly an enjoyable diversion, Wild City must be acknowledged as somewhat underwhelming. Hong Kong film aficionados are right to be thrilled that Ringo Lam is back in the director's chair and still invested in telling topical stories through the medium of gun-toting, knife-wielding, car-exploding action cinema, but Wild City offers few surprises. Yet, if Lam is able to bring his signature style to the heightened stakes and spectacle expected by today's audiences, his best work may still be ahead of him.
Sign-In to Vote
Tweet 0 Submit

"there is a notable lack of martial arts in the street scuffles (which is particularly disappointing considering what we know the likes of Philip Ng and Shawn Yue can do)."
Wasn't Lam aiming for his usual fairly realistic action directing? His crime thrillers never had any martial arts per se, because that's not what an actual street fight looks like.

It certainly seems to have been the case here, but whatever Lam's intentions, the results were just a little underwhelming for my tastes.

I'd like to mention Ringo Lam's Burning Paradise from '94 remains my favorite movie of his, one I consider to be among the best Martial arts films ever made.