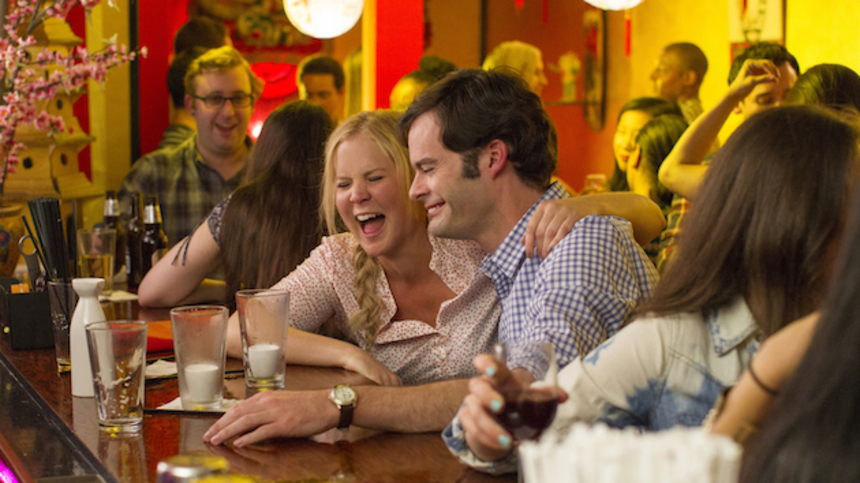 Comedienne Amy Schumer has drawn a lot of eyes (and sometimes ire) for her Comedy Central sketch show Inside Amy Schumer, which lampoons, subverts and raises the ground under many traditional American roles women find themselves pigeonholed in at work, in domestic life, and in the pop culture at large.

Her most famous sketch sees the comedienne stumbling upon a Wonderland-like party honoring Julia Louis-Dreyfus' last fuckable day... at least, that's according to the media. It's a wonderfully absurd, yet achingly direct sketch that criticizes the awful parameters women in show business find themselves in.

Meanwhile, Judd Apatow, the so-called heir to the boy's club style of raunch has eased himself into a comfortable position directing certifiably white and affluent riffs on the hang out movie... with a bit of family man existentialism for good measure -- it's seemingly harmless stuff; a sweet take on male crass. But it is also honoring an increasingly dangerous status quo in American comedy.

So what can one make of Trainwreck, the romantic comedy written by and starring Schumer, with Apatow in the director's chair.

Fans of Schumer's edgier sketch work may think that at first blush her approach has been sidelined for the typical Hollywood formula of romance, but she and Apatow prove to be a capable comedic pairing, sticking to her strengths with more subtlety than her show. The result is a decent subversion of many romantic tropes, which also never dismisses the topsy-turvy heart found in the best of the formula.

The movie opens with a father (Colin Quinn) telling his daughters, Amy and Kim, that he and their mother are getting a divorce. To illustrate this he draws an example the kids can grasp, one about how people should be allowed to play with more than one doll. It's an easy way to explain such a complex issue to kids, and in Schumer's hands becomes an interesting commentary on how women are objectified. We end the scene with the girls repeating to their father: "Monogamy is not realistic."

Jump ahead 23 years and Amy is a writer at a men's magazine in NYC. Taking her father's words to heart, she hookups with as many men as possible, boozing her way through the evenings, and making it a rule to never sleep over. While she has a sorta-boyfriend on the side, (wrestler John Cena as adorably sensitive muscle man Steven), she's in no way ready to take him seriously. When Amy's shark-eyed editor (Tilda Swinton) assigns her to do a piece on Aaron (Bill Hader), a doctor who specializes in treating high-profile athletes, that's when our romance kicks in: one where we'll hit all the expected highs and lows. Of course, the big question is: Is the movie funny? Mileage may vary, but for fans of Schumer and Apatow, not to mention Nora Ephron and Woody Allen, Trainwreck should prove to be perfectly pleasing. As someone who is a waning admirer of Apatow, and who can take it or leave it with Schumer, I was amused more than anything else. The director's improv heavy approach, with Schumer's penchant for sketch, proves that they are at their best in short bursts, with a few wonderfully silly self-contained scenes that'll be sure to get the biggest laughs. But as a whole Trainwreck is, in typical Apatow fashion, a loose, overly long hang out movie. Instead of starring dudes in Los Angeles, it just now stars a woman and takes place in New York. Go figure.

As the good stuff goes, Schumer and Hader have an easy, natural chemistry which eases into awkward lovelorn he said/she said moments that ultimately echo the aforementioned Ephron rather than the millennial angst of Lena Dunham -- who always seems to be gunning for Ephron's spot anyway. Schumer mostly sheds her clueless, sex-positive and privileged white woman persona from her stand-up for a better-informed, sex-positive and privileged white woman. Hader, proving more and more just a great actor in any role, comedic or dramatic, brings a sweet nuance to Aaron, a man who may be in over his head, but is absolutely glad to be there... which baffles Amy to no end.

The majority of laughs arise from the absolutely stacked and eclectic supporting cast. Per an Apatow production, we get a plethora of comedians, from Dave Attell, Vanessa Bayer, Mike Birbiglia, Tim Meadows, and a dozen other notable faces, but it's actually basketball superstar LeBron James that may be the most on-point, playing a version of himself who acts as Aaron's best friend and relationship coach. Cena, too, gets good laughs with his fitness related attempts at dirty talk, while We Need To Talk About Kevin's Ezra Miller brings his mutable sexuality to what is perhaps the movie's most off-beat scene.

While many fans of Swinton will be hoping for her particular brand of weird, the joke here is that she's probably the most straightforward, female and human looking she's ever been. Playing the adult Kim is the always charming Brie Larson, who brings further depth to the darker family history involving Quinn's alcoholic if well-meaning father.

What feels nominally progressive about Trainwreck is that it is -- minus the woefully misguided ending -- from the female gaze, cleanly and clearly sexualizing the male form. Considering this is a commercial comedy in a largely male dominated landscape this is a rare and very welcome perspective. Also of note is that the movie doesn't carry with itself much shame or judgement for its characters' choices or lifestyles. This is despite what may seem like a black and white take on children of divorce and alcoholism all grown up (Amy busies herself with casual sex, while Kim marries early). Unfortunately, what could have been a cathartic look at the issue of family alcoholism, is all too conveniently curbed by a simple cleaning-up-my-life montage that hits in an already deflating third act.

While I would have loved to see Schumer's script in the hands of a more transgressive comedy director like David Wain or Susan Seidelman -- someone who better understands the comedienne's meta and satirical bent -- Apatow proves he's willing to mix it up from his typical formula, if just so. But in a day and age where Schumer herself, not to mention the likes of Broad City's Abbi Jacobsen and Ilana Glazer, are challenging the status quo of comedy in America, is that actually good or merely good enough? As that goes, your mileage may vary.

Trainwreck opens nationwide in the U.S. on July 17th.