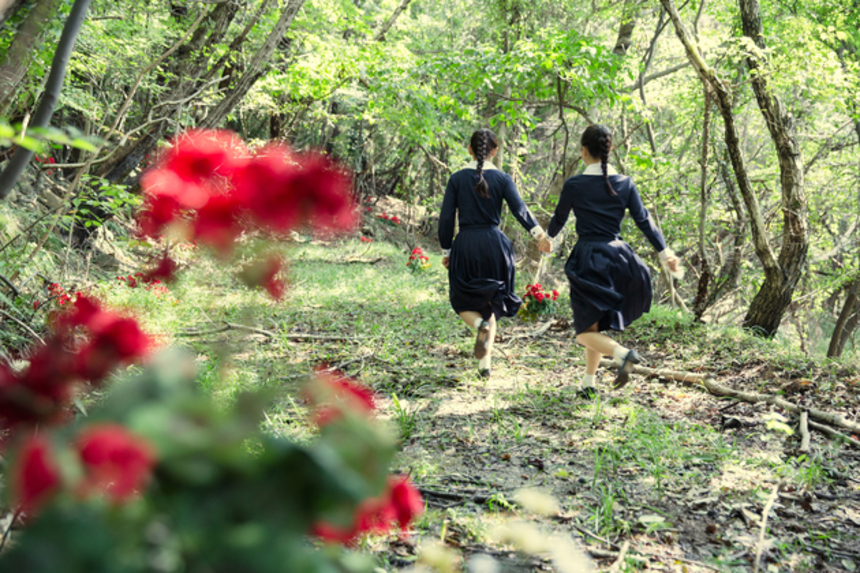 In 1938, towards the end of Japan's rule over Korea, a girl is transferred to a remote boarding school lorded over by a stern principal. Upon her arrival she discovers that the girl whose place she has taken had the same name and as she begins to receive treatment for an illness, she starts to uncover a secret lurking inside the school.

With its high school setting, teenage girls and summer release date, The Silenced appears to follow the homogenous style of Korean horror yet, despite being billed as one by its distributor Lotte Entertainment, don't expect the cheap scares or supernatural revenge plots that have come to define the recently maligned subgenre. Instead, Lee's film is a dark and moody period thriller with a different kind of payoff which steers the film into some fun genre territory.

Though hardly ingenious, The Silenced strays just far enough out of the Korean genre codes, which have become increasingly restrictive, while also maintaining a refreshing consistency. Even as the narrative takes some sharp turns deeper into its running time, director Lee, with the aid of a very talented production team (particularly in the production design and cinematography departments), brings some smooth clarity to the action.

Lee Hae-young has amassed one of the more eclectic filmographies in contemporary Korean cinema, first as a writer on films such as high school comedy No Manners (2002), martial arts pic Arahan (2004), romcom Au Revoir UFO (2004) and expedition thriller Antarctic Journal (2005) before co-directing the coming-of-age drama Like a Virgin (2006) with Lee Hae-joon and breaking out on his own with the multi-strand erotic comedy Foxy Festival (2010). Given his prior credits, the mutable tone of The Silenced is not so surprising. Rather than a recognisable style, what Lee brings to his projects is consistency, as he deftly keeps the sometimes disparate elements of his narratives in balance.

For foreign viewers, one potential stumbling block will be the cast, not due to their performances but because, on the surface, they are made to look very similar. Fans of Asian cinema will be used to straight, black-haired and uniformly dressed teenagers, but here the girls' similarities go so far as to encompass their height, body types, faces, hair styles, and even they prim way they must move around the school's corridors. The extreme uniformity of the characters is likely a deliberate gambit, as it strips them of their individuality in a setting that is controlled by a colonial oppressor. It makes even more sense after a few plot reveals, but figuring out whose who sometimes involves a little too much guesswork.

Speaking of the cast, A Werewolf Boy (2012) star Park Bo-young extends her repertoire with a decent turn in pole position. Her quiet teenager is a touch too guarded early on but Park turns on the fireworks when her character (and performance) gains confidence later on, particularly during a cathartic final scene. As the cold and stolid principal, Eom Ji-won (Hope, 2013) plays to her strengths and delivers a reliable performance. If anything, the film could have afforded her more screen time. In her first major screen role, following lots of small parts in indie fare, Park So-dam is a nice surprise as Yeon-duk. Able to convey a range of moods and emotions with her expressive face and lithe frame, it surely won't be long before we see her tackle a bigger character.

With its sterling production values and potent atmosphere, The Silenced is an effective chiller that unabashedly seeks to entertain rather than surprise. Modest ambitions may dampen the staying power of this slick production, yet with a colonial era setting that turns out to be more than just set dressing, it transcends mere escapism.