Review: THE END OF THE TOUR, Pulling Emotional Heart Strings In A Quest For Creative Success 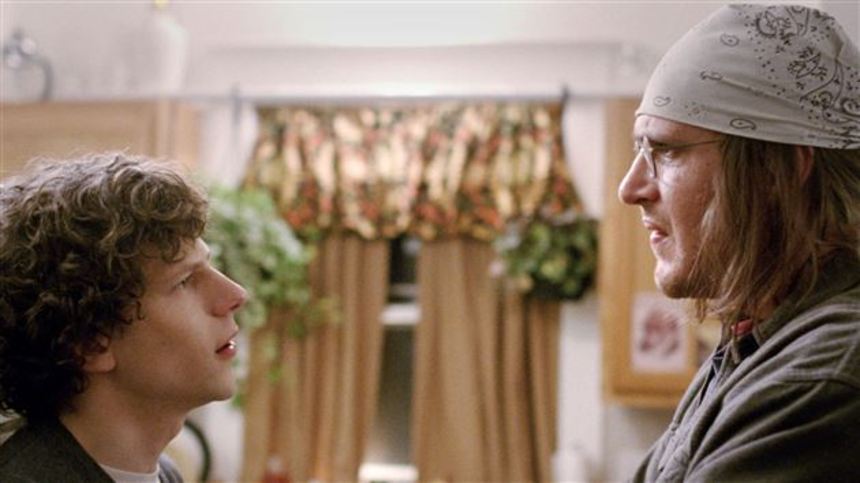 Can you call it a bromance if there is no comedic intent? If not, then what's the best way to label a burgeoning platonic relationship between two men connecting over previously unexplored similarities and interests? Maybe it's just friendship, relationship, or connection. But none of those really define the dynamic at play quite as eloquently as just calling it a bromance.

Call it what you like, the dynamic explored in James Ponsoldt's David Foster Wallace drama The End of the Tour is a brilliantly touching and informative trip inside the male intellect. With remarkable performances by Jason Segel and Jesse Eisenberg, Ponsoldt delivers a film that is both a touching portrait of an enormous literary figure and an introspective journey into the creative process.

Based on David Lipsky's memoir Although Of Course You End Up Becoming Yourself: A Road Trip with David Foster Wallace, Donald Margulies's screenplay takes us on the road with Lipsky (Eisenberg) as he interviews Wallace (Segel) over the last days of his 1996 tour supporting his epic and seminal novel The Infinite Jest. While Rolling Stone never published the interview, Lipsky held onto the tapes which he used as the basis for the book after Wallace's 2008 suicide.

Wallace's suicide and Lipsky's subsequent rediscovery of the tapes acts as the film's framing device but the meat of the movie unfolds as the neurotic and self-conscious Lipsky interviews the nervous and even more self-conscious Wallace. The rolling tape recorder plays an ever present third wheel on the tour causing Wallace to constantly amend his comments and reminding Lipsky that he's there for work and not to make friends.

An uneasy sort of friendship does emerge between the two contemporaries, set on opposite sides of celebrity's divide by Wallace's recent success. It's the exploration of this dynamic where the film gets to stretch its legs, driven home through both the stellar central performances. Perhaps the most surprising is that of Jason Segel. Never have we seen him display this sort of maturity in a role. It's a remarkable and downright moving performance that looks destined to win plenty of fans in the awards prognosticating world come that time of year.

James Ponsoldt excels at pulling at emotional heart strings. We saw it in The Spectacular Now with the unmistakable onset of coming-of-age teenage love. While The End of the Tour is a very different film, there is a similar sort of emotional vulnerability. Here though it's the search for masculine identity through two men's quest for creative success. In both cases, Ponsoldt is at the top of his game -- and making a strong case to be called one of the best American directors working today.

Review originally published during the Sundance Film Festival in January 2015. The film opens in select U.S. theaters on Friday, July 31, via A24 Films.

Do you feel this content is inappropriate or infringes upon your rights? Click here to report it, or see our DMCA policy.
David Foster WallaceJames PonsoldtJason SegelJesse Eisenberg

More about The End of the Tour