Review: SOUTHPAW Fights Itself To A Draw 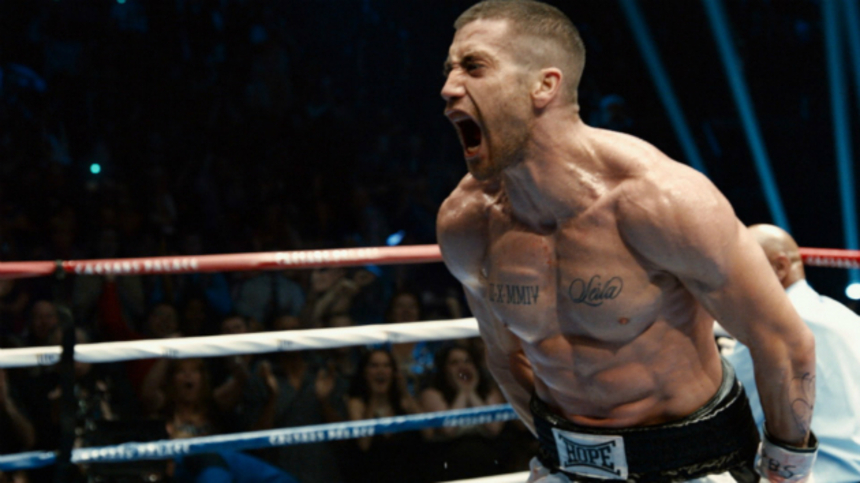 Movies about boxers enjoyed a revival in the 1970s, marked by the popularity of Rocky, a well-made tale about an underdog getting a shot at the title, and the artistry of Raging Bull, which depicted the savagery of the sport and its participants both inside and outside the ring.

Between those two high points, very few boxing movies have rung the bell, as far as quality or endurance are concerned. Southpaw, originally conceived as a star vehicle for pop star Marshall Mathers (aka Eminem) by writer Kurt Sutter, falls solidly into the middle, neither sufficiently rousing nor markedly distinctive to satisfy those who are not boxing fanatics.

As directed by Antoine Fuqua, Southpaw is never less than a watchable enterprise. Mauro Fiore's cinematography is a joy to wallow in, lit appropriately for the occasion, whether that's a gaudy title fight, a luxurious mansion, or a downtrodden room for rent. It's easy to see why Fuqua and Fiore have been frequent collaborators over the years. John Refua's editing is spot-on, keeping the action scenes propulsive and the dramatic sequences lively, and the production design by Derek R. Hill makes every setting look and feel exactly as needed. James Horner contributes one of his last musical scores, enhancing the drama without calling attention to itself.

Fuqua has certainly been on a roll lately, directing Olympus Has Fallen and The Equalizer with such high-polished finesse and narrative momentum that it was easy to overlook their various deficiencies. But Southpaw indulges in so many stereotypes that it stumbles repeatedly, sometimes tripping over its own feet. Billy Hope (Jake Gyllenhaal) is, quite obviously, a Great White Hope, a boxing champion who is beginning to show the effects of taking too many punches to the head. His intensely loyal wife Maureen (Rachel McAdams) worries that he has only a short time remaining before his mind starts to go. She already makes all their business decisions, in harmony with his manager Jordan (50 Cent), but she is more concerned with Billy holding on to his marbles long enough to finish raising their bespectacled daughter Alice (Clare Foley).

Things do not work out as Maureen has planned. Before long, Billy has lost his championship and must rebuild his life, centered around regaining the trust of Alice.

Gyllenhaal does his utmost to make Billy Hope a force of nature. He's an active volcano inside the ring, erupting regularly with rage. Outside the ring, however, Billy is a dim sad-sack, completely reliant upon Maureen, and capable of little more than juvenile expressions of emotion. Billy and Maureen were both orphaned and met as children in an orphanage, which serves to explain their tight connection. Maureen is the brains of the operation, and has been happy to prop up Billy for years. Billy's emotions run deep, but he's never known how to express them properly to anyone other than Maureen, and she's enabled him.

Rather than explore that angle to any greater degree, however, the film heads safely back toward parental melodrama. It's difficult not to think of The Champ, which was remade with a predominance of soap suds in 1979, featuring Jon Voight and Ricky Schroder, plus Faye Dunaway. That movie arrived in the midst of the boxing-movie revival, and represented the tear-jerking nadir of the sub-genre.

Southpaw is not nearly that bad, but it runs away from nagging narrative issues in search of an easier, more crowd-pleasing resolution, making it feel at though it's trying to be more Rocky than Raging Bull. It doesn't succeed. Southpaw may look good, but it's less filling emotionally and intellectually, regurgitating tired tropes without adding anything new of its own.

The film opens wide in theaters throughout North America on Friday, July 24.