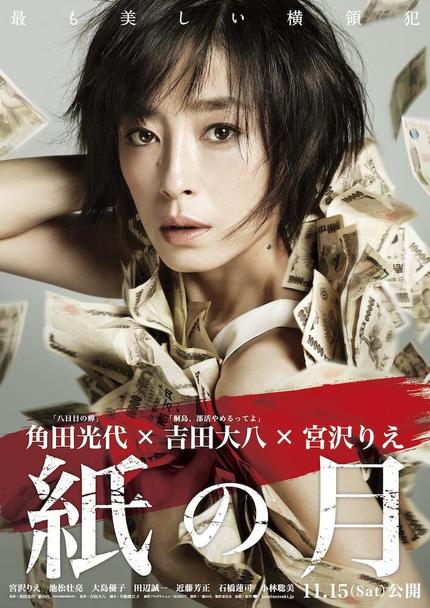 Director Yoshida Daihachi's darkly comic cinematic slices of life have been winning awards since 2007's Funuke Show Some Love, You Losers!  Having been a hit at 2013's Japan Cuts with The Kirishima Thing, director Yoshida returns to our shores with Pale Moon, the seething and shining story of an unlikely thief.


The Lady Miz Diva:  During PALE MOON's flashbacks to Rika's childhood, I got the impression that she seemed to have a purer sense of charity and kindness and the nun's teachings than the nuns do.  I'm curious as to what your view of Rika was?

Yoshida Daihachi:  You used the word, "pure," and that's very interesting, because I think the word pure has a very positive connotation in English, but it also has a different side to it as well, right?  It also connotes being exposed and completely wild.  She's untainted by social rules and morals.  Of course, she's genuine and pure, but she's also a very dangerous creature in that sense.  That's how I imagine Rika.

LMD:  Are "dangerous" and "wild" words you used in some of the notes you gave to Rie Miyazawa that enabled her to create such a perfect moderation of her performance?

YD:  I probably did use those words when directing her, but at the same time, by the time that she completely read the screenplay, I think we both agreed on who Rika is, and we could completely share the vision of her. We saw eye to eye and that only was confirmed through her performance.

LMD:  Money only seems to bring Rika unhappiness, but then she goes and finds the boy that she sponsored when she was a young girl.  Was that meant to represent an underlying message, that even though money can bring sadness, you can use it to a positive end?

YD:  There's a line, and above it is happiness, and below it is unhappiness: So, when she did not possess that money, the variation between her happiness and unhappiness was very narrow, but when she possessed money, the range widened.  I think she chose to have that range from happiness to unhappiness, rather than just having a very narrow experience.

LMD: Your films have a sweet side and an acid side.  How do you know how to balance the sugar and the cyanide so that it's not too much one way or the other?

I don't know if I'm doing it consciously, but I will tell you that in regards to Pale Moon, I think I'm a pretty mean person.  The reason why I say this is because if I give you a lot of sweet, the mean becomes even more pronounced, but when the mean is continuously mean and difficult; even with a drop of sweetness, it feels even all the more sweet, right?  I think I always tease the audience so that I can have a bigger ultimate impact, so I think I keep the audience as thirsty as possible before I give them that one drop of water, and vice versa.

LMD:  I enjoy your films' depiction of women, here in PALE MOON, or PERMANENT NOBARA, or FUNUKE SHOW SOME LOVE, YOU LOSERS!, where the ladies are the center of the piece. But even in KUHIO TAISA and THE KIRISHIMA THING, which ostensibly have the males as the main focus, the intricacies really lie in the ways the females interact.  Are women more interesting characters for you to tell your stories?

YD:  So, my perception of women is that they are under more social pressure than men.  So, in that sense, they are much deeper thinkers than men.  And I think when women move and act in a film, they can therefore reach things that maybe men can't.  They go beyond them in a sense.

LMD:  We hadn't spoken when THE KIRISHIMA THING screened here in NY, but I had to ask about that. I know it's based on a novel, but were the character of either Ryoya Maeda or his friend Takefumi somewhat autobiographical?

YD:  Everybody says that because of how I look.  I think that film is very unique in that each and every character that is in that film is a reflection of myself.

LMD:  The look of your films is very distinctive, whether it's muted and sedate like PALE MOON, which compliments Rika's mild mannerisms, or the beauty and colourful calm of PERMANENT NOBARA, or the saturation of FUNUKE that looks a bit feverish.  How much do you intend for the palettes and tones you use to inform or mislead the audience?

YD:  I do talk a lot about tone my cinematographer, especially the strength of the color.  One of the questions that we consider is, what color is this film?  I'm not sure if "mislead" is the right word, but with that first shot, the opening shot of the film, you can say so much in the particular texture of the sound and also the tone of the film; you can communicate that right away to the audience, so I do think deeply about that.

LMD: There seem to be a lot of meanings or messages in PALE MOON.  What did you intend for audiences watching it to come away with?

YD:  I think I believe that human beings fundamentally cannot change their true nature.  It does not change as long as you live.  But when you realize that, it's sort of freeing - it's liberating.  So, I think to live is to see how much you can free yourself, and I think through this film I wanted to show one way you can find your true nature in order to free yourself.

LMD:  Because the structures of your films are complex, does that mean you prefer for the actors to stick to what is on the page, or do you enjoy considering their input and contribution?

YD:  I'm not sure if I prefer them to stick to closely to the script or not.  If they make a mistake in delivering the dialogue, and if I like that, if I like how they deviate, I'll just keep that.  But I am very particular about my sense of the character; my image of the character.  Some of the actors involved in Pale Moon said that I instructed them on how many times they can blink their eyes, or how they shift their weight.  So, in essence it's much bigger than just words on a page; it's the tone, it's the nuance of the character.  I don't compromise in that regard.  I think I move my actors very precisely and also I restrict them, as well.

LMD:  Words used often to describe your work are "dark," or "black comedies," and even "cruel."  How would you describe your own work?