New York Asian 2015 Interview: Director Ringo Lam On The Past And Future Of Hong Kong Film 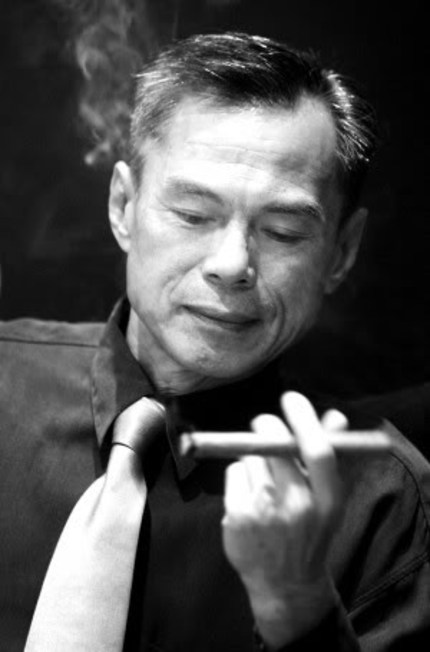 Nearly 30 years after some wise producer told him to make the movie he wanted, the gritty, exciting, Hong Kong-loving films of Director Ringo Lam have been influencing filmmakers around the world ever since. Lam came to the New York Asian Film Festival to receive their Lifetime Achievement award and stopped to talk about those crazy days shooting on those Hong Kong streets and returning to cinema after a ten-year break.

Here's my chat with the coolest dude to ever set a City on Fire.


The Lady Miz Diva:  Congratulations on winning the NYAFF Lifetime Achievement award.  Do you think this comes at the right time, or do you wish they'd waited a little longer?

Ringo Lam:  I was very surprised, because I'd already stopped making movies for more than 10 years.  The moment that I stopped making another movie, Wild City, my latest one, they told me someone is going to send me a lifetime achievement award, so what could I say?  I'm very happy that people can still remember me. {Laughs}

LMD:  Why was there such a long break?

RL:  Personally, when I finished some movies in America, maybe I got a little bit tired.  And then my son was very young and I felt my family needed more time from me.  Then I felt, okay, I should do less films and spend more time with my family.  Unexpectedly, once I slowed down, then I found out I didn't want to think, I didn't feel like I wanted to create any scripts or anything.  Just lazy, maybe.

So, the kind of movie I make mostly is a realistic story.  That's a problem.  So, even when the producers come to meet me and want me to work on their film, but I would mention, "If you're asking me to work on a realistic movie, I would be happy to do it," but when I would go deeper into it, about the story, they would back out, because they are afraid they cannot get past the censors.

LMD:  It seems like during the time that you've had this break, things have changed and progressed with the Chinese censors a bit more.  We're seeing more contemporary content.  Do you feel coming back now, that you are able to express yourself and your vision more freely within the system?

RL:  For the last maybe five years, I can see more Hong Kong movies working on the realistic stuff, like Derek Yee and Overheard {Alan Mak and Felix Chong}, so at least these movies, they are all contemporary movies, right?  They have gun stuff.  So, since then I have a chance to work on this genre - that's the genre I used to work on.  So, when the producers came to me and asked me to do a swordsman movie, I said, "No, you better go after Tsui Hark."

So, I started thinking that my son was already growing older and getting mature, and my family don't need too much of my time, so I have too much spare time to start to go back and work on movies that I like.  And the period that I stopped for so many years was also very humble and very good for me; this long break, actually, even though I don't make a movie, but my mind, my brain keeps thinking and changing a lot.

So, until now, I started thinking that if I don't work on a movie anymore, after 10 years, that even if I want to work on it, people won't hire me anymore because I'm too old.  Everybody knows I've already reached the age of 60, you know?  After 10 years that might happen, so I thought if I still have something I wanted to express, it's better to do it now.

So, I think now the attitude towards moviemaking is every movie can be my last one; that's what I think.  Every movie could be my last one, so I should make use of all these opportunities to express myself from the films I work on.

LMD:  Do you feel you're able to do that with WILD CITY?

RL:  I don't know if you have watched Wild City?

RL:  So, when you have a chance, we'll talk again.  Wild City is different from the kind of "on Fire" films.  Basically, Hong Kong's been changing, my mind, my thinking's been changing. I believe I'm getting more mature, so even my movies are getting more mature. My violence and all this stuff, maybe to a certain extent, is tamed.  They asked me if I wanted to watch City on Fire tonight, and I said *sigh* "Too much blood!"  So, I picked Full Alert tomorrow, instead. {Laughs}

So, City on Fire was made in the year 1986, and then 10 years later, I made Full Alert, and in another 10 years, I made {my segment in} Triangle: From these three movies, actually, you can see physically the city of Hong Kong is changing, and somehow, I feel like it's very important to record part of Hong Kong through my films; the way it looked, the way the people walked and talked, the way they dressed, I think that's important.

LMD:  Tell us about shooting CITY ON FIRE in 1986 on the on location in Hong Kong.  You can see from the faces of the bystanders on the street that they don't know what is going on.

LMD:  What it was like to film in the streets of Hong Kong at that time?

RL:  Back in the old days as a filmmaker in Hong Kong, we worked on very low budget movies, right?  And the city is completely chaotic and the traffic uncontrollable, including people, so what could I do?  I had to steal shots from the streets all the way.  So, I was trained to work on stuff like this with without choice.  When I worked on Maximum Risk, the American movie; then I learned that they buy the whole street, they pay all the shops, every car, every extra, they are all paid, right?  Everything under control - but that's not the case in Hong Kong.

So, I remember when I did City on Fire and Full Alert, and every time when I shot on streets, the policemen must come up to me, they must be called, okay?  So, we are trained to stand firm; either you get us and the whole crew arrested, or I will continue shooting.  That was the only choice I had.  And I knew that that day I was going to waste in the police station: It's okay, but the bottom line is that the policemen didn't want to arrest us because they didn't want to work and do all the paperwork.

LMD:  How were you able to get away with some of the stunts and action shot on the streets without someone getting hurt accidentally?

RL:  Actually, in the old days, we had a very good action team and everything was planned; we worked out all this stuff very carefully.

That also reminds me, that during the action, an accident cannot be avoided.  Even a small jump from only a chair - so simple - can also cause an accident, or harm to the action guys.  So, compared to when I worked on Wild City, unfortunately people got hurt.

Accidents are very difficult to avoid.  Even if you just run out of the door without jumping, you might fall, you might knock yourself against the door, whatever.  Nobody can guarantee that everything is safe, but we must have the attitude to prepare, to make sure that everything we work on is at the safest, safest level.  So, that reminded me that back to the old days, when I did Full Alert and City on Fire, nobody got hurt.  I didn't hear anything about hurt.

Today, when I worked on Wild City, it was very impressive, so many things I've got under control, and everything is so much better prepared, but we still had accidents.  And when I worked on American films, the American action guys also got hurt, just by accident.

LMD:  CITY ON FIRE was the result of your being told to make the film you wanted to make, which is quite unusual.  Did you have a feeling at that time that something exciting was happening? Did you have a sense of the creativity and energy in the industry at that time?

RL:  City on Fire and Full Alert are almost the same case.  As a director in Hong Kong, the contract is less than two pages - less than two pages!  Very simple at that time.  Maybe one and a half pages.  And of course, the money was already put on the top of the table.  "So, with this money, can you work on the picture?" "Okay!"  Then I worked on the picture.

The boss, they didn't even talk about who is going to be the lead of the film.  I didn't know who was the lead, yet.  The only thing was, "Ringo, do what you like. Do the kind of movie that you like and uses your expertise."

But today, there are more restrictions - the budget is good, growing bigger - the market in China is very huge, and all the Hong Kong movies have to be able to enter the Mainland Chinese market, because most of the financing is from Mainland China.  So, I have to work on a story, a genre they can accept, right?  And I have to be able to pass the Chinese censors, and that's how Wild City came out.

LMD:  You began as an actor. Did your experience in acting affect the way you directed other actors when you went behind the camera?

RL:  I once was an acting talent, when I worked for TVB, the television broadcasting company.  After I received acting training for one year, very fortunately - also very unfortunately - I was the first one to be picked to play the lead in a 60 episode TV series.  And then it's funny, you know, by then, Mr. Chow Yun-fat, he only played an extra, and they noticed him, even as an extra.

Unfortunately, I was not ready, and then 60 episodes, and I felt like every time when I played out a scene in the studio, I could hear people yelling from the control panel - the director yelling at me, "This idiot, how can he be a good actor?" {Laughs}  So I was very upset and I don't like myself, my appearance on screen.

LMD:  Besides WILD CITY, what is next?

RL:  I have Eight and a Half, and mainly I was attracted to this project because we are going to pay respect to this film world, so I said, "Okay, I will be happy to do work on this one."  And I already finished the pages, I can shoot any time, but I cannot breathe the contents at this moment. {Laughs} But maybe tomorrow, I'll change again because there's no budget. {Laughs}

Do you feel this content is inappropriate or infringes upon your rights? Click here to report it, or see our DMCA policy.
Hong Kong CinemaNYAFF 2015Ringo Lam