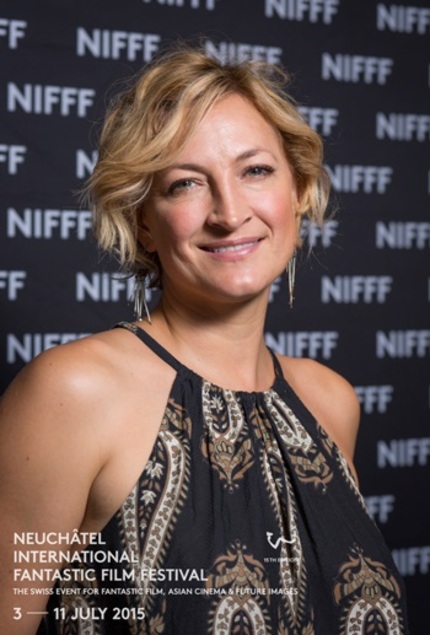 While within the industry, stunt people are appreciated for their incredible work and discipline, not many of them reach the cult status of Zoë Bell. From her work on Xena: Warrior Princess to Kill Bill, and her transition to acting in Death Proof and Raze, Bell's story is not just one of luck and timing, but passion, commitment, and all-around skill and talent can and does get recognized. I had the pleasure of chatting with her at NIFFF, where she is on the International Competition Jury this year. Not only was this one of the most fun interviews I've ever done, but I think I have a new hero.

Shelagh Rowan-Legg: When did you decide you wanted to work in film as a stunt person?

Zoë Bell: I didn't really have a concept of film stunts as a career when I was young. I was raised on a small island where there was no movie theatre, and my father is a doctor and my mother is a nurse. I wasn't raised with the idea of movies as an art form. I loved gymnastics and climbing trees and swimming. I did gymnastics for a long time, and when at 16 I was too old and tall to do that anymore, I started doing martial arts. Martial arts had the same sort of appeal, and through that I met stunt people. The fact that doing stunts was a career was mind-boggling to me. I did well in school, but I had no particular directional drive, and that concerned me a bit. But once I discovered stunt work, I knew that was what I wanted to do. And through that work, I learned about the film and television industry, about directing and acting work, which I really didn't before. For many years, because my entry into film was through Quentin [Tarantino], I felt uneducated, that I should be embarrassed. But then I realized that it's not where you come from, it's where you end up.

With starting in acting, I came from the side of being an athlete, through this technical side. Being openly vulnerable, which actors have to be, was a challenge for me, to open myself up like that. I come from the technical side, knowing where the camera is, where to hit my mark, and watching myself on the monitor and critiquing myself from an objective perspective, that I am used to. For me, the new part is learning the emotional freedom, and that is equally as terrifying.

You were on Xena for three seasons, and it was and is a huge cult show. How did your work grow through working on a television show?

I found myself referring to it as my 'Xenaversity'; when all my friends were at university, I was at stunt university. Doubling the lead was good; I do well when I have responsibility, if no one is relying on me, I get nothing done. If my work is important to others, I work hard. Also, doubling the lead meant that I was working every day. I had plenty of opportunity to make mistakes, so I had to learn quickly and learn well. Someone can tell you how to do something to get less hurt, but until you hurt yourself, you don't know it to be fact. Plus, it was also the New Zealand stunt person pool, which is quite small. If Xena fell off her horse, which happened, I had to learn how to do a high fall; if she dove into hell to save Gabrielle, which also happened, I had to learn how to do fire burns. My meat-and-potatoes work was fights and acrobatics, but then there would be an episode set in the future where Xena would get hit by a car, so I had to learn that. It was very jack-of-all-trades, and it gave me a mental openness. I think I also get that from gymnastics, which is quite a broad sport, you have to have strength, flexibility, and dance, and all that does play into stunt work. So I was very open-minded about it, and I would know if I could do something or would be able to do something with training. It never occurred to me to specialize, I just did everything.

Were you ever scared of any of the stunts you had to do?

Oh yeah, but you just have to do it. The normal human fear of pain or breaking something or death that I would train myself out of per stunt. You learn to trust the equipment, you learn to trust the people around you. If you trust the equipment and the people, then you can rationalize that fear away. The fear that ends up with my heart beating at the beginning and the relief at the end is performance anxiety, not being the one who made a mistake, or made us have to shoot again or responsible for a three hour reset. Any time as a director or stunt coordinator, if the people that I work with are happy, I'm relieved. The nerves have been about the performance. Some people look at what I do and think it's so much fun, which it is, but it's also a job. I'm considering how it will work the whole time.

Have you worked with actors who are more interested in the stunt work that others?

Yes, and I love it when an actor wants to be involved. I get off on collaborative work, if someone's firing on all cylinders, that's great. Maybe if they want to do all their own stunts, that's not so good, you worry about the outcome. The joy is when myself and who I'm working with add all our own bits to make something great. Even if it's someone I'm working opposite, if it's a male actor, and they're not threatened or freaked out, they're into it, then you get to make it great. Because you know when it look's cool, when there's a good energy. You can have a technically perfect fight scene, but if you don't have energy, you lose a lot of it on screen. When someone is engaged it's better, like dancing.

When you started to move more into acting, was that your choice, or other people encouraging you?

It was Quentin telling me that he cast me as the lead in a film, and then it seemed like a natural progression. That implies that it was easy, which it was not. But I knew that I wanted to try; I'd been doing stunt doubling since I was 17, so I'd gotten to a place where I had already transitioned into coordinating, and I was at a similar place. Plus, it was so terrifying, something I was inexperienced at, but I thought maybe I could potentially be good at it, but had no awareness. So a year or so in, I recognized that I had to chose it, the world wasn't going to do it for me, I had to fight for it, which made it nine hundred times more scary, and difficult to stand behind yourself.

I wonder to, because you were doing a film like Death Proof, which is an action film, people would just assume you were playing 'yourself', the stunt performer, so they would think that it wasn't an acting stretch for you.

Totally, and I was talking to a journalist a couple of years ago, telling them that, had I wanted to be an actor my whole life, having someone like Quentin write you into their script would have been the most amazing thing. But it was this flip side, I had to make the decision to stop doubling, stop doing stunts, I started taking acting classes, more so that I could identify as an actor.

I remember watching you in Gamer, I think maybe six years ago, and I knew who you were as a stunt performer (I hadn't seen Death Proof yet), and even though you had a small part, it made an impression on me, I remember thinking to myself, that you should get more proper acting roles.

And it was such a battle. I wasn't coming into this as a 23-year-old, who they could put into any TV Gossip-Girl-type show, I'm not that actress. Someone compared me to a Mini Cooper, she said that when those cars first came out, no one got it, they couldn't sell them, then one person in marketing recognized the advantages that the car had, and it was re-marketed and then they were everywhere. It's been difficult, and I've had to learn to feel comfortable with what makes me unique as an actor, accept it and be proud of it. When I'm confident, I sit in a room differently, and it's taken a while with acting.

You definitely took a step up with Raze, with a well-rounded, emotionally charged character. How was that experience?

It was fundamentally shifting for me. I worked hard, and put in a lot of preparation. I was part of the script as it was forming, and as it was forming, I was like holy shit! This is going to be really intense! But it was amazing. But a lot of the benefit for me was that it was the action and the emotional sides were violently meshed together. I could use the world that I'm comfortable in, the action, to help with the emotional side of it. I'm not uncomfortable being emotional, but sharing it with a bunch of strangers is different. So that was really intense, but something clicked over during the shoot. I found Sabrina, and it's not me, she's not me, but I could switch in and out. And I discovered things about myself as an actor, like I don't like to carry my character with me, it's exhausting. Maybe in between takes, particularly if she's in a hard place, but at lunch time and the end of the day, I like to go back to being Zoë. But I walked out of the end of that film feeling confident saying that I'm an actor.

People do still talk about you as a stunt person, but now also refer to you as an actor.

And I'm proud of the work I've done as a stunt person, that does not need to be dismissed. But I had to separate myself from defining myself as a stunt person, because that was my safety zone, I would hide in it, and people would let me. Now, if someone says, 'oh, you're a stuntwoman', I feel comfortable telling them, no, I haven't doubled for years, acting is where I'm at now. Because I don't give a fuck, I'm not trying to convince people now.