Munich 2015 Review: EMBRACE OF THE SERPENT Explores Spirits Of The Colombian Amazon 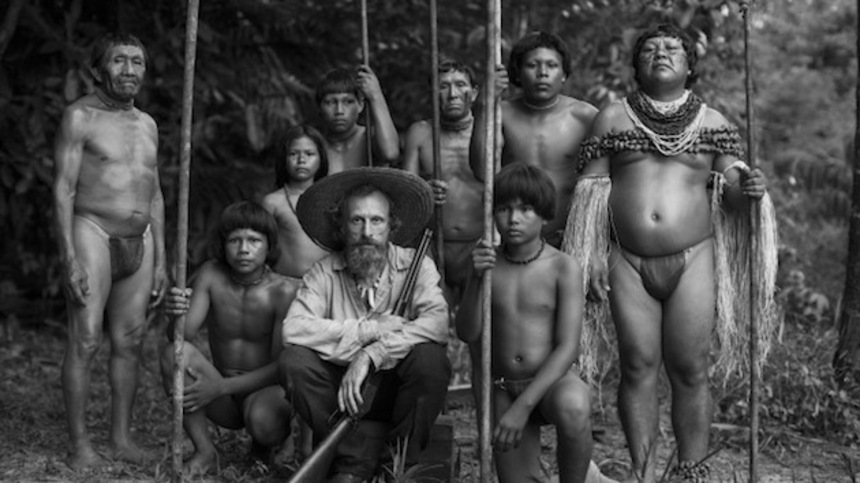 Inspired by Theodor Koch-Grunberg and Richard Evans Schultes, the first explorers of the Colombian Amazon, Embrace of the Serpent is a spiritual quest with a political regret.

We follow two stories of German explorers (one of them is Jan Bijvoet of Borgman) meeting with an Amazonian shaman and searching for a healing plant. The film won the top prize at a very strong edition of Director's Fortnight in Cannes.

Director Ciro Guerra's third feature bears witness to the consequences of the European invasion that changed and destroyed culture and landscape of this stunning area of the world forever. But even more, it is a search for something beyond reach, something cosmic, maybe something that is not supposed to die.

Like so many films it follows a clash between cultures, juxtapositions which always have to deal with otherness and in this case the question of colonialism. The movie does not dig very deep concerning its ethnographical awarness but still one gets a sense of the life of indigenous people. At times the film lacks an ethical or even aesthetc position to the issues it raises because instead of giving us the opportunity to discover our inability of fully understanding the other, it makes it very easy for us to read and comprehend the motives of Karamakate. Due to that we always feel superior, always in control.

Guerra leaves the uncontrollable to the realms of science. It is an Aldous Huxley like quest to find the doors of perception with a healing plant called yakruna. Karamakate protects the secret of this plant which remains a last symbol for the independence of his people. At the same time he is very aware that with his people also their knowledge will disappear.

The plant opens the doors and hypnotic, philosophical undertones dominate the structure and images of the film. In two breathtaking shots men are standing in the midsth of a swarm of butterflies. More and more cosmic elements haunt the images and add some much needed ambivalence to the political issues of the film.

Beside some obvious worldview differences, Guerra shows two main issues of colonialism. In terms of ecology it is the story of rubber plants concerned with slavery and death and in terms of culture it is the Catholic Church. With the latter the director might just go a little bit too far as he is installing a mission that is much more like Marlon Brando's sect in Apocalypse Now than anything else.

Madness reigns in this forest and another obvious influence is, of course Werner Herzog's Fitzcarraldo. There is even one scene in which classical music is played from a record player.
The film's stark black-and-white imagery gives one both rough and tender feelings of the jungle. The camera is floating over surfaces, the river becomes an eternal mirror only showing time, loss and beauty.

In its best moments Embrace of the Serpent shows this region as something already vanished, as history and as an experience beyond reality. It is one of those films that rarely gets made, somehow a lost film in a lost place.
Sign-In to Vote
Tweet 0 Submit

Do you feel this content is inappropriate or infringes upon your rights? Click here to report it, or see our DMCA policy.
Ciro Guerraembrace of the serpentmunich filmfest