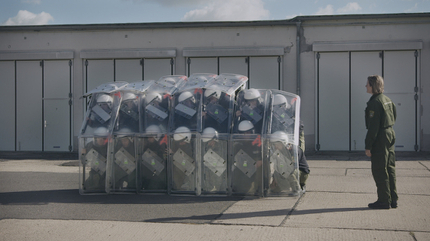 It is the doubt we even face when we are totally committed and the way we have to erase some of your principles to find a world we can live in. Civil Servants, the first feature-length documentary by Maria Wilke is said to be the first time a German film takes an uncensored look at police life, or to be more precise, the training to become a member of police in Saxony-Anhalt.

It is a gaze behind the scenes of what normally remains hidden. By following a narrative the film sometimes forgets to show us that some things still remain hidden as it is too proud of its sweeping access. Nevertheless there are some great scenes of doubt, discussion or transformation we can witness.

Most intriguing are a very nervous scene at a firing range and the strange confrontation of trainees and actors who reenact certain situations a policeman might have to deal with in daily life. The film opens with the latter and one gets immediately drawn into this fragile world. One of the aspects of the training is definitely the suppression of personal opinions.

But still, there are debates over the ethics of the job and reminders of individual responsibility. Wilke does not judge here, she is a calm observer.

What becomes very clear is that the training with actors differs very much from the actual street life. In the gap between training and reality lies the sense of time in Civil Servants. Something has changed, you can see it in the faces and you can hear it in the voices.

One time a young apprentice asks when this moment of change occurs and manners and ethics of policemen transform. The stories of cruelty and coldness we all have heard of, they are no fairy tales. But one can never expect something like this from the tender hearts of those we accompany in Civil Servants. It is an achievement of the film to let us be part of this transformation while showing us that it is not as easy as we thought.

It still is a pity that we do not get a sense of duration. The lack of this sense might just come from sticking to close to two rather obvious protagonists, an ambitious immigrant and an incredulous woman.

Here the film misses its main interest, which is the training as such, the process, the faces, movements and realities. This is why a scene with the two protagonists sitting on a bed and exchanging thoughts as part of their education is not nearly as impressive as the swearing-in ceremony with hundreds of young humans. No matter how interesting the protagonists are, they cannot compare to the curiosity we have in relation to this world as such.

Another problem is that the static camera is neither necessary nor beautiful, it often seems just inflexible and thus the hand camera shots seem much more to the point, making us part of an experience where we do not know what is coming, and still get a sense of framing and distance.

To be honest, this criticism derives from comparing the film a bit too heavily with Raymond Depardon's breathtaking News Items which I had seen just a few weeks before. But still, even someone like Frederick Wiseman working with static shots gives a greater sense of political and poetical framing, there is more meaning and power to every image and to the images in relation to each other.

Still, Civil Servants is a promising and interesting effort, one that asks the right questions and keeps the right distance to make us aware of a world we have not known before.
Sign-In to Vote
Tweet Post Submit