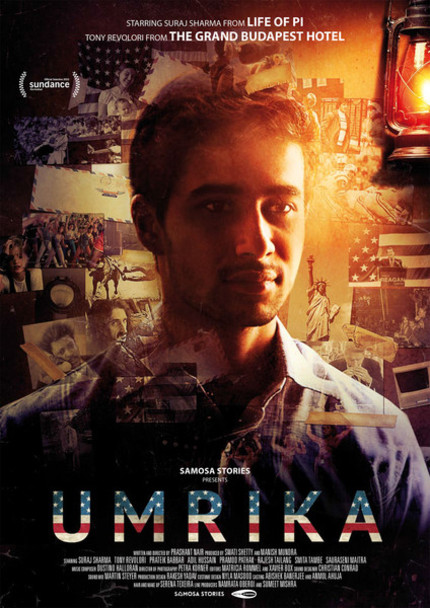 Set mostly in early '80s rural northern India, Prashant Nair's Umrika pulses with universally relatable warmth and emotion.
The film is the story of a young man whose older brother leaves his modest hamlet on the way to better things in America (the Umrika of the title). When the older brother Udai turns out to have disappeared on the way, the younger brother Ramakant (Life of Pi's Suraj Sharma) tries to track him down while simultaneously writing letters home to his mother so that she won't worry. Revealing much more than these skeletal details would represent major spoilers, but allow me to assure you that it's a journey well worth taking.

Prashant Nair's Sundance Audience Award winning drama is among the finest Indian independent dramas of the last few years, which have been exceedingly strong for this emerging cinematic power. Nair's ability to provide historical context for the film is essential for creating the world in which the film exists. Through creatively placed and executed voiceovers and montages of '80s era Cold War news and Indian cultural touchstones like the 1982 near-fatal on set injury of Amitabh Bachchan while shooting Coolie, Nair is able to transport his audience to the time period in which the film is set. This is a crucial and effective tool, given the fact that the rural village would likely look identical today. It also helps to place the characters' grand aspirations during a time of seemingly infinite potential, before the Internet closed the gaps in global communication, when Umrika was still a fantasy for much of the world.

Anchoring this great film is a cast of solid character actors, including at least one very interesting supporting performer. Suraj Sharma grabbed the eyes of the West for his performance as the titular character in Ang Lee's Life of Pi, but his performance here is far more nuanced and central, as he leads the film in the right direction rather than being pulled along my Pi's story. His transformation from a country boy to a savvy sleuth is perfectly performed and his performance is absolutely perfect for the film. Also worthy of note is the supporting performance of Rajesh Tailang as the Postman/guru of the village. Tailang's previous lead performance in Richie Mehta's devastating Siddharth was enough to get my attention, but with Umrika he proves that one does not have to have his name above the title to make a significant contribution. Hispanic character actor Tony Revolori (The Grand Budapest Hotel's Zero Moustafa) also makes a surprisingly convincing appearance as Ramakant's best friend.

Nair's skillful script unfurls the story of Ramakant and Udai a little at a time, allowing the viewer to experience Ramakant's revelations along with him. This is a film that is best experienced as cold as possible, as most synopses that I've read reveal too many plot points and may leave viewers simply waiting to connect dots that have already been drawn for them, rather than allowing the film to proceed at its own pace. This rewarding experience of simply allowing the film to take me on a journey was a large part of Umrika's success. Much like Karthik Subbaraj's Jigarthanda, Umrika allowed me to be surprised at every turn, and without gimmicks.

On the technical side, the 16mm photography of Umrika is absolutely stunning. Whether vividly capturing the brightly lit wide open spaces of rural indian village life or the seedy, dank underground of '80s black market Mumbai, cinematographer Petra Korner's work is impeccable. Her photography, while not flashy, is perfectly composed and suited for the occasions, and manages to define two different worlds in an instantly recognizable visual way. Her work in service of Nair's story is definitely worthy of note.

Umrika is yet another in a seemingly endless line of Indian independent films produced by visionary businessman Manish Mundra. Mundra has produced one festival hit after another over the last 3 years, from Ankhon Dekhi, to X the Film, to Berlin award winning Dhanak, to Cannes award winning Masaan, he seems to have a golden touch. However,  Mundar's secret weapon seems to be his confidence in the artists he works with, his largely hands off approach allows films like Umrika to exist as Prashant Nair intended it to, and in this case is works beautifully. Umrika is definitely Prashant Nair's film, and it's a beauty. Definitely check this one out.