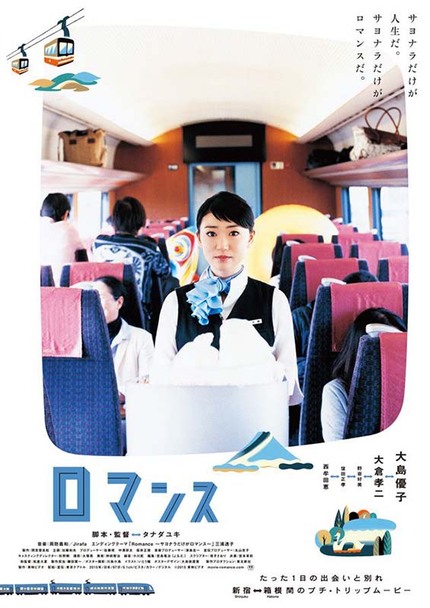 The Cowards Who Looked to the Sky was one of Japan Cuts 2013's most-buzzed about offerings. The director of that film, Tanada Yuki, visits the festival this year with her latest feature, Round Trip Heart, a beautiful road trip around Mount Fuji and Hakone that teaches one young woman to take the road less traveled.


The Lady Miz Diva:  Please tell us the inspiration behind ROUND TRIP HEART?

Tanada Yuki:  First, there was an offer to do a film with Oshima Yuko.  I've always been curious about the work of an attendant on a "Romancecar" train.  It's very unique work and I always thought Yuko-san would look great in the uniform, as well, so that's how it started.

LMD:  I'm also curious about those attendants and how efficient they are.  Did you have Ms. Oshima work with a real attendant as part of her research?

TY:  She was very busy, of course.  Her schedule is very busy, so she couldn't do too much with it, but I did ask her to do some training in between.  She absorbed everything very quickly, so she remembered a lot.

LMD:  In ROUND TRIP HEART, Hachiko begins talking about how much she loves the dependability of the round-trip trains, yet she finds herself after going off course on a road trip all around Hakone.  Was that your plan for her arc, to leave that rigidity of a life where she just goes back and forth every day?

TY:  So, as I began working on this story, I always was fascinated by this idea that when we all meet someone, we always must part from them.  That's an inevitable part of life.  The way we separate is either we make a decision to part, or one of us dies and that's how we separate.  Lovers, families; we all must part one day.  I was interested in delineating a protagonist that is not fully conscious of the fact that we have to separate one day.  By separating at the very end, the character, Hachiko, definitely in a very small sense, but in an important sense, she learned to confront and face her life with a much brighter outlook.

LMD:  Was the "Old Man" Sakuraba, meant to be played by an older actor? I didn't think he was terribly old.

TY:  The actor, Mr. Ookura Koji, he turns 41 this year; he's one year older than me. But I think Japanese actors tend to look a little younger, so perhaps that's why he looked young to you? But he got very tired during those running scenes, so I think that he's his age.

LMD:  Is he like a spirit guide, or a kind of fallen angel in her life, teaching her to live well?

TY:  I think so, in a way, because I really wanted to depict how Hachiko grows up from the point of their first encounter, to when they separate.  So he enables her growth.

LMD:  Please talk about the beautiful location in Hakone. What was it like to shoot a feature in a huge tourist spot?

LMD:  After they were introduced I wanted to know more about everyone like Sakuraba, Hachiko's father and even the clumsy friend on the train.  How do you know when to stop writing for these secondary characters and find a balance for the film?

TY:  So, I do think of the background to the characters, but in regards to how much I actually show in the movie, I'm not so sure.  But I can say that this was my original work, so I really wrote very freely, as I wished.  I was very careful about making sure that Hachiko is the protagonist, that she's depicted that way, that she is the leading force.

LMD:  Specifically, I'm curious if you had any intention of filling in the mother a bit more as she looms so large in Hachiko's thoughts?

TY:  Not really, I think I depicted just the right amount, and I think if I had depicted the mother too much, the film would've gotten a bit too heavy.  And especially considering my last two works, THE COWARDS WHO LOOKED TO THE SKY and MOURNING RECIPE, also dealt with the issues of pregnancy and not being able to become pregnant, so for this film, I want to take a little bit more of a relaxed approach.

LMD:  How important is the theme of transformation in your films?  All of the women in your films are on personal journeys that take them out of what was a normal, easy life.

LMD:  THE COWARDS WHO LOOKED TO THE SKY, AIN'T NO TOMORROWS and MOON AND CHERRY are some of your films that deal with female sexuality or females taking the lead, sexually.  Is the idea of showing that women are sexual beings who can take the initiative a theme you consciously put forward in your films?

TY:  I don't know if I particularly think that the women are taking the initiative in regards to their sex life, but I think I just want to depict it as a regular part of life.  I just propose that it is a part of life.

LMD:  I asked a popular female Korean director about whether actresses felt more comfortable working with a female director and she gave me a very surprising answer.  What has been your experience? I would think for some of the nudity or sexuality in the film, it would be a relief?

TY:  I think that there are good points about working with a female director for an actress, but at the starting point, I think there's a very particular anxiety and nervousness that they feel because I am a female director.  But once we get over this, there's a great partnership that we can establish, but I think that when we start out, we're both very nervous because we are of the same sex.

When we start out, I think because we are of the same sex, there's no hiding anything; we can sense each other out.  But I think when it works in a good way, it's amazing.  And for me, fortunately, all the actresses that I've worked with in the past, we have formed a great partnership.

I think when we do get along, it makes my work so much easier. Take choosing costumes, for instance, it's very fast with actresses; they can just decide like that, instantly.  But with actors, they take so long, and they won't listen to me, and they meander and get lost, in a way, but then they'll just come back and say, "Okay, what you chose for me in the shoot is fine."  The actresses will just wear what I chose, so that makes it easier.  The men are very sensitive, in general.

LMD:  Ando Sakura from AIN'T NO TOMORROWS will be coming to the festival.  Do you have any comments about working with her?

TY:  She was wonderful.  We decided on her to do an audition and everybody that was there at the audition, as soon as she started acting, were just so absorbed by her, so taken by her.

LMD:  You mentioned that ROUND TRIP HEART was your own story, but I know you've done adaptations of novels and manga.  Do you prefer the freedom of writing your own story, or is it easier in a way, to structure your film from an adapted work?

TY:  I would say it's half-and-half.  There's positive and negative sides to adapting from manga or novels.  And when it is an original work, I think my conflict and what I struggle with most is that actors - flesh and blood human beings - have to perform what is written on the page and in order to figure out how to do that, I do struggle, but sometimes I do enjoy that struggle, as well.

LMD:  Director Tanada, do you have a new project coming up?

TY:  Not yet. {Laughs} It hasn't been decided yet.  In Japan, the film industry, it's very difficult for anything to get produced these days, and I do have a few projects in progress right now.  Any one of those works in progress can be terminated at any time, so all I can say to you is that I'll do my best.

Do you feel this content is inappropriate or infringes upon your rights? Click here to report it, or see our DMCA policy.
Japan Cuts 2015Japanese CinemaOshima YukoRound Trip HeartTanada Yuki