Fantasia 2015 Review: THE DARK BELOW Will Make Your Blood Run Cold 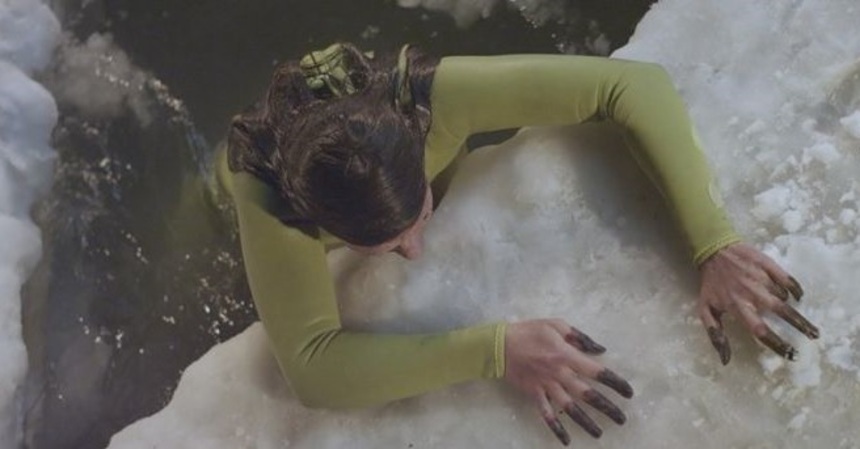 Here's a new kind of chiller, for real. The Dark Below, which screened for the first time ever at Fantasia 2015, features a woman trapped in a frozen lake for nearly the whole length of the film. It was shot in sub-zero temperatures, and as someone who can't stand that kind of cold, I find it amazing that anyone would agree to work on the film in the first place. That also means that the entire premise is that much more horrific.

Directed by Douglas Schulze, who co-wrote with Jonathan D'Ambrosio, The Dark Below takes its time unfolding the narrative in clever ways. Rachel (Lauren Mae Shafer in a relentlessly physical performance) is a woman who's been choked and drugged by Ben (David G.B. Brown), then dragged out to an ice dive site and forced underneath to die in an "accident." That's how the film opens. We find out what their relationship is through a series of memories, as Rachel's life flashes back through time, and we see how truly awful Ben really is. I mean, what kind of jerk would wear that terrible shirt to his own wedding reception, no matter how casual? From then on, we know that he's a horrible human being.

The Dark Below is a survivalist horror film which features the worst monster of all, the human being. The terrific Veronica Cartwright sears the screen with her eyes and presence alone; she turns up as Rachel's mom (presumably; her character is not listed with a name on IMDb) in an interesting role. Actually, it's an essential one in a world in which older actresses are scarcely given screen time. Shafer should win an award for this kind of extreme endurance, and Brown is a subtle psychopath whose menace never feels overly theatrical.
The story unfolds with only three words spoken, but that doesn't mean that you'll get bored or feel like you're being pandered to --- quite the opposite, as Schulze shows and doesn't tell. And when there is only one line of dialogue in the entire film, you'd better make it mean something. Thankfully, it's a good turn of phrase which makes a lot of sense given the situation.

While it's not a perfect film --- the frost bite would be more extreme in reality, there are a few issues with the sound design, and the score is bit over the top in telling you what to feel --- The Dark Below is a frozen-solid thriller that will chill you to the bone.